With so much written about Apple (AAPL), I am amazed that so few have focused on the most important driver of its stock price: the company 270% return on invested capital (ROIC).

The most common bear arguments for AAPL are:

Apple represents the best of corporate America because of its elite level of profitability. A 270% ROIC means that the company generated, in 2011, $2.70 of economic earnings for every dollar of capital put into the business over its life. In other words, Apple generated enough cash flow to pay off its original investors 2.7 times in one year. In 2010, Apple’s ROIC was 206%.

For investors considering buy AAPL now, the stock is cheap and implies astonishingly low profit growth. At $570/share, the current valuation suggests that Apple will grow its NOPAT by only 10% In fiscal year 2012. Consensus for EPS growth is over 60% this year (2012) and around 15% for 2013. If Apple grows its NOPAT by 15%, compounded annually, for 3 years, the stock is worth north of $700.

Apple deserves to have largest market cap in the world because it is the most profitable company in the world. And yet, according to Figure 1, it trades in line with the market average.

Figure 1 shows a regression analysis of how much changes in ROIC explain changes in the ratio of a company’s enterprise to its invested capital (a fancy price-to-book ratio). For the 492 companies in the S&P 500, the explanatory power of ROIC on enterprise value to invested capital ratios is quite strong with an r-squared of 76%. In other words, ROIC explains about 76% of the valuation of stocks in the S&P 500.

At a minimum, this analysis shows that AAPL’s stock is fairly valued for its extraordinary ROIC. However, this regression analysis ignores growth potential. Given that the consensus estimates Apples will grow faster than the S&P, AAPL should trade a premium to the S&P. 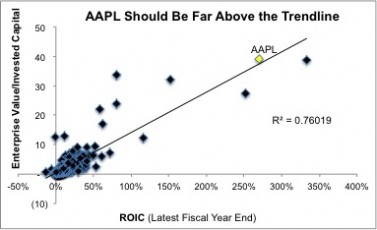 Moreover, when you look at the how much Apple contributes to the profitability of the market (i.e. the S&P 500), I think you can make an argument that it deserves a meaningfully higher valuation.

Figure 2: Accounting Profits Are a Mirage

My rating on the stock is Very Attractive and I recommend investors buy and hold the stock because of its extraordinary profitability and cheap valuation. Click here for details on my AAPL rating and my top-rated ETFs and funds that hold AAPL.

Disclosure: I am own AAPL. I receive no compensation to write about any specific stock, sector or theme.