Any investor who believes there is no need to do their own research and diligence should take a look at this report from S&P. Oh, and this one too. The first report shows that 74% of actively managed US equity funds underperformed the market over the past three years. The second report shows that less than 5% of all top-performing funds remain in the top-quartile two years later. 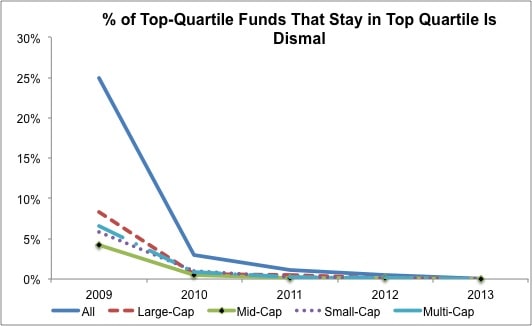 I argued in an article recently that index investing is not a substitute for due diligence and even passive investors must make active management decisions.

S&P’s latest reports all but prove that blindly turning over your money to an active mutual fund manager is also a bad idea. Most active managers underperform the market in any given year. Those few managers that do outperform in one year are highly unlikely to repeat the feat the next. Betting on which manager gets lucky in any given year is not smart investing.

Digging deeper into the two reports mentioned above reveals just how severely active managers have been underperforming. All domestic funds have lagged the S&P Composite 1500 by 23% over the past five years. All large-cap funds have returned 52% less on average than the S&P 500 over that same time frame. Most active managers are clearly not justifying their fees.

Don’t think you can identify a winning manager based on their track record either. Investors may have thought Bill Miller was unbeatable in 2005 after his fund had outperformed the market for 15 consecutive years. Those investors received a rude awakening when Miller’s Legg Mason Value Trust (LGVAX) lost 36% over the next five and a half years while the S&P 500 gained 13%.

Consistent outperformance by actively-managed funds is almost non-existent, as seen in Figure 1. Of the 558 mutual funds in the top quartile of performers in 2009, only one remained in the top-quartile for each of the next four years.

The takeaway is: trying to pick the next manager to get hot is not investing. It’s gambling, and the odds are heavily stacked against you. There is no substitute for good due diligence.