The market decline experienced thus far is closer to its beginning rather than its end. Today’s refreshing market rise is likely just a flash in the pan.

There is nothing that politicians or regulators can do to prevent the natural price discovery that is critical to the long-term health of our capitalist system.

The market needs to go down again before it can sustain any future rise.

We simply must deal with the loads of toxic and mis-allocated capital that our profligate society has created over the past 20+ years.

Allow me to explain how we got ourselves in this situation. Figure 1 highlights the three successive stock market bubbles in just over 10 years. Compare the size of these bubbles and the rise in stock prices over the last 25 years compared to the prior 65 years. A simple trendline further accentuates just how much stock prices have appreciated compared to historical trends. 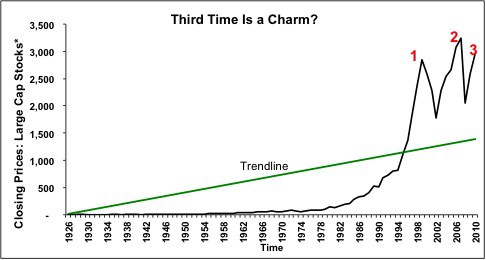 Sources:   New Constructs, LLC and Ibbotson Ibbotson, 2010 Ibbotson Stocks, Bonds, Bills and Inflation Valuation Yearbook, (Chicago: Morning Star, 2008), 228-229. *Large Cap Stocks as defined by Ibbotson are the best comparison for the S&P 500, which did not exist as it does today in 1926.

I am not suggesting that stock prices should revert to the long-term trendline. I fully appreciate the accelerating pace of innovation realized by our society and its impact on standards of living and improved utilization of resources.

There is no question that we live in unprecedented times of prosperity and wealth creation. And technology holds great promise for the future achievement of mankind and will drive improvement in the standards of living around the world.

The problem is that we have gotten ahead of ourselves. By how much, I am not sure. But I am sure that we are due a (lasting) correction in the stock market, and the longer that correction is put off, the more painful it will be.

Now, let’s review what happened after these bubbles burst.

See the response pattern? See how it affected the markets?

It is as if the bubbles never burst. Game back on. Like a high-school party, the music stops and everyone is quiet when the cops show up. Someone convinces the cops that nothing unscrupulous is going on and all will be calm and quiet. Then, as soon as the cop car is out of sight, the music gets turned back on and the party goes harder.

What will be the response to the third bubble that has formed?

That is the question that I think the market is finally facing. The answer is not the same as before.

The government has run out of stimulus and policy bullets.

Really, what else can politicians and regulators do to engineer a soft landing, or should I say, another bubble.

Figure 1 shows that we never really landed. We rocketed from one bubble to the next.

Let’s take a look at the options available via the two main forces for stimulating economic recovery:

So, who is going to bail us out this time?

My overriding message is that no one should have bailed us out to begin with. The longer we avoid the painful process of deleveraging and returning to a more deliberate and rational mode of capital allocation, the more we delay the inevitable. The more we shift the blame for our financial mistakes to the public sector, the deeper the hole we must dig out of.

Which brings me to the next point: shifting responsibility to the public sector, i.e. government, presents some very serious problems and headwinds for future growth:

Sure, it feels better when the stock market skyrockets, bank accounts are fat, growth is strong and the financial future is bright. Wasn’t that what we got in the 1990s, then again in the first decade of this century?

It cannot go on forever. Consider how much the housing bubble was driven by too much borrowing? Though financing might be cheap and easy to get for extended periods of time, there is not an infinite supply.

At its core, borrowing is simply a method of cashing in today on future earnings. The more we borrow against future earnings, the less we have in the future.

Keynesian policies can be successful in certain situations and for limited amounts of time, but they cannot be sustained infinitely. Borrowing and spending by the government can help the economy survive a soft patch or decrease the depth of a recession, but it does not fix the underlying capital allocation problem.

Keynesian economic policies are patches to economic problems, not fixes. If extended for too long, they only make matters worse.

So who is left to bail us out? Only two potential candidates: American corporations and foreign countries.

A quick survey of the status of the other major economic powers is not exactly inspiring. China is slowing growth to fight its inflation problems. The European Unions, well, they have their own problems. Japan is not exactly prospering. In general, there are few, if any, global economic bright spots. None are large enough to bail out anyone.

Then, there are the banks. US banks recently enjoyed the largest bailout in the history of the world. Further, their profit margins have been subsidized by sustained low interest rates. And yet, they are lending little money.

Is the problem that banks do not want to lend or that there are not enough borrowers?

I think the answer is both. Many banks are still carrying a great deal of toxic assets. With so much risk already on their balance sheet, they cannot afford to take on more.

As for borrowers, the uncertain tax, regulatory and economic outlooks are not exactly enticing entrepreneurs, small and large businesses to take risk.

To summarize, there is no one left to bail us out this time.

So, what happens next? We buckle down and face the long hard road to true, not artificially subsidized recovery.

In the meantime, the stock market and economic activity will continue to suffer. No pain no gain.

Dis­clo­sure: I am long GOOG, AAPL and MSFT. I receive no com­pen­sa­tion to write about any spe­cific stock, sec­tor or theme.