All of the fund’s top five holdings get my Attractive-or-better rating, including Microsoft (MSFT) – Very Attractive rating. MSFT gets my best rating because the company’s’ ROIC, at 72%, ranks 8th in the S&P 500 while its stock price (~$33/share) implies the company’s profits will permanently decline by about 20%. High profitability and low valuation create excellent risk/reward in a stock.

Certainly, no one can claim to have perfect predictive powers, but that is not the point. The point is that the quality of fund research should be closer to the quality of stock research. The backward-looking ratings that dominate fund research are, in many ways, a disservice to investors.

So, after reading Chuck Jaffe’s “Be wary of predictive mutual-fund ratings”, I wondered: should we be wary of backward-looking mutual fund ratings? The answer is “yes”.

Ever hear of the “five-star kiss of death”?

It refers to how funds tend to underperform after getting Morningstar’s highest rating. The cause of the underperformance is thought to be: so much money flows to the top-rated funds that they can no longer execute the strategy that generated the strong performance that got them the five-star rating.

Some decent evidence backs up this theory. According to Mr. Jaffe, “studies show that more than 90% of all money flowing into funds goes into issues that carry four- or five-star ratings.”

There is no question that Morningstar’s fund-rating system beats the drum to which fund investors dance.

And yet, the analysts at Morningstar think rather poorly of the star rating system as reported by Matt Hougan in “Morningstar Star Ratings Vs. Expense Ratios”:

Morningstar in its own research admits that expense ratios are better predictors of performance than their ratings.

So, it should be of no surprise that Morningstar recently introduced a more “forward-looking” rating, which it calls “analyst ratings”. Mr Jaffe explained this new rating system soon after it was released in November 2011. In short, the new analyst ratings group funds into five categories: gold, silver, bronze, neutral and negative.

Accordingly, the “gold-star” kiss of death may be more deadly than its “five-star” older brother.

Before we jump to conclusions, let’s see how the new analyst ratings are playing out so far.

Figure 1 comes from a study that reveals quite a positive bias in the new analyst ratings. Two-thirds (67%) of all analyst ratings are “Gold” or “Silver”. Only 4% get a “Negative” rating as of 12/31/2011. Two more keen insights from the study:

Figure 1: Do You See Any Bias Here? 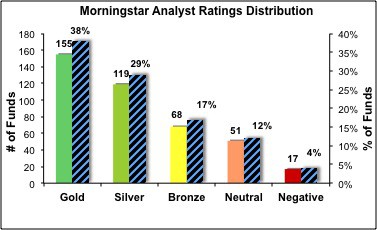 Remind you of Wall Street’s stock ratings? Loads of “buy” recommendations and very few “sell” ratings because “sells” are just not good for business.

The same is true for negative fund ratings as Morningstar is much more likely to get licensing fees from funds that want to brag about their “gold” Morningstar rating than a “negative” rating.

If we learned anything about research in the last few years, it is that you cannot trust the coverage of firms who get paid by the entities they are covering. Remember how the credit ratings firms missed the issues in the mortgage backed securities packaged by their Wall Street clients?

Looks as if Mr. Jaffe is right…we should be wary of predictive fund ratings…at least those that show bias. 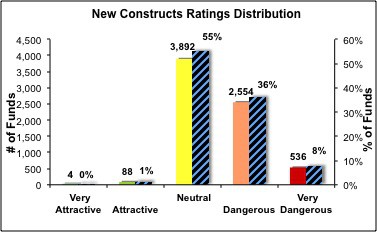 As my regular readers know, my fund ratings are based on my stock ratings on the fund’s holdings. My stock ratings have shown strong predictive ability according to Barron’s.

My track record also shows that I carry no bias in my opinions on stocks. I write a balanced number of positive and negative recommendations. My research is based on financial facts, especially those buried in the footnotes, not subjective opinion. Here are my latest Stock Picks and Pans.

Disclosure: I own MSFT. I receive no compensation to write about any specific stock, sector or theme.