The Financial Times recently detailed the alarming level of influence Morningstar (MORN) has on mutual fund managers and the decision-making of millions of investors. The article also revealed how Morningstar’s unrivaled influence, in turn, leads funds to invest heavily in special executives to influence Morningstar and their ratings.

In some cases, because a downgrade from Morningstar could cost billions in AUM, the fund manager himself may allocate time and resources to influence the fund-rating firm. For example, the Financial Times reports that, earlier this year, PIMCO founder Bill Gross spent months lobbying Morningstar analysts to avoid a downgrade and keep the PIMCO flagship fund’s Gold rating.

Bill Gross’ actions are similar to a CEO convincing a research analyst to keep a “Buy” rating on his company’s stock. Sure, CEOs and investor relations staff meet with research analysts on a regular basis. However, there are two key safeguards in the equity world that protect investors from companies having undue influence on the rating of their stock.

Fund managers know their paychecks depend in part on Morningstar’s ratings. Higher ratings mean more assets under management, more assets means more fees. Those who have been in the investing business for a while know that if there is a loophole that people can exploit to make money in the stock market, you can rest assured it will get exploited. It’s naïve to suggest that funds aren’t doing anything and everything possible to influence Morningstar’s ratings. Mutual fund investors need look no further than what happened to stock investors before Reg FD to get a sense of the risk here.

Both Rating Systems Are Lacking

Morningstar’s star ratings are purely objective and quantitative, but they are also backward-looking. The track record of a fund is useful knowledge, but it is a poor predictor of future results. To counter the criticism of their star ratings, Morningstar developed the new analyst ratings. Morningstar’s close relationship with fund managers both helps and hurts the accuracy of their ratings.

On the one hand, Morningstar’s closeness to the funds it covers provides certain advantages for investors. Morningstar can get portfolio breakdowns, information on fund flows, and other relevant data faster than most other providers. The Bill Gross story exemplifies how Morningstar can, unlike the average investor, interact directly with fund managers and get insight into their strategies.

However, Morningstar’s close ties to fund companies such as PIMCO come with a downside (and not just from bedbugs). Morningstar’s analyst ratings are highly subjective and rely on judgment calls about the validity of the manager’s process. With so much interaction going on between Morningstar’s analysts and the mutual fund managers they cover, it’s hard to believe that the analysts can remain completely unbiased.

In addition, Morningstar derives a significant amount of its revenue from asset managers, both from selling data to them and collecting licensing fees those companies pay to advertise their Morningstar ratings. Assigning negative ratings to a fund can damage Morningstar’s relationship with that manager, so it’s in the company’s best interest to give mostly positive ratings. Not surprising, Morningstar’s analyst ratings are heavily skewed towards the positive end. See Figure 1. 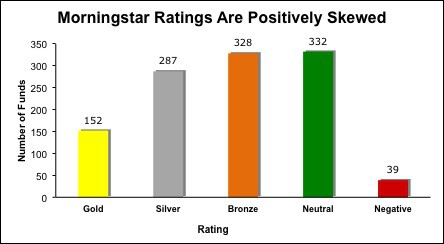 That distribution looks similar to what we see from Wall Street sell-side analyst ratings, and we know how unreliable those ratings are. At least on Wall Street you have multiple firms providing ratings and vying for influence, in the mutual fund world however there is really only one firm.

767 out of 1,138 (67%) of funds with analyst ratings earn a Gold, Silver, or Bronze rating, while only 39 (3%) earn a Negative rating. Even though research shows that actively managed mutual funds regularly underperform their benchmarks, Morningstar analysts are 20 times more likely to give a positive rating to a fund rather than a negative one.

Morningstar provides a great service to investors by collecting an extraordinary amount of information on past performance, fund flows, and fund strategies. Subjective and positively skewed ratings are the price that investors pay for all that data.

Our predictive ratings for ETFs and mutual funds give investors a different perspective from Morningstar’s ratings. Unlike the star ratings, which are based on past performance, our ratings are based on the quality of the fund’s holdings. Unlike Morningstar’s analyst ratings, which are subjective and overwhelmingly positive, our ratings are based on objective criteria, and we assign just as many Dangerous and Very Dangerous ratings as we do Attractive and Very Attractive.

We read over 3,000 annual reports a year in order to remove accounting distortions found in the financial footnotes. This diligence gives us a superior level of insight to traditional fund research, which is reflected in our results.

How to Pick a Fund According To The Expert

Fund industry expert Chuck Jaffe of MarketWatch.com recently wrote an article about how he picks a new fund. In the article, he writes that before settling on a fund, he checks with Morningstar, Lipper, and New Constructs. In addition to checking with analysts, Chuck does a great deal of diligence on his own by reading fund newsletters, examining costs, and figuring out tax impacts.

Investors should not blindly follow the advice of any analyst and should constantly look for information that challenges their positions. Our objective ratings can help investors avoid high-flying funds that are about to blow up. They can also identify seemingly boring funds that are poised to outperform.

Morningstar’s ratings have become the standard in the industry, to the point where many investors will not buy a fund that doesn’t earn either a 4 or 5-star rating. Both the star ratings and the new analyst ratings have a significant impact on fund flows without any evidence that they identify funds that will outperform.