A recent report from Accenture asks “Fintech – Did Someone Cancel the Revolution?” The report notes that the promise of Fintech startups to change market structure, radically improve products, and disrupt incumbent financial firms has not yet come to pass.

This question comes in the wake of a decline in new Fintech startup formation. Per Figure 1, the number of Fintech startups in the US and Europe has declined rapidly since 2015 after several years of steady growth.

Figure 1: Where Are the Fintech Startups Going? 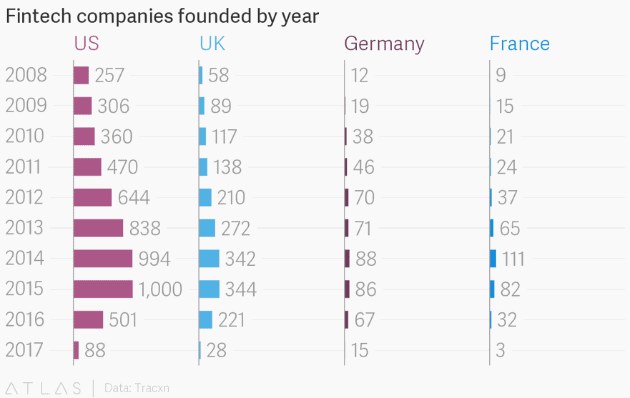 The Accenture report misses a key point. The Fintech revolution hasn’t been cancelled, it’s been co-opted. Startups that once aimed to disrupt big financial firms now partner with them. Many Fintech startups count incumbent firms among their key investors or have been directly acquired by them. Startup formation has slowed because some of the technological innovation is moving in-house.

Naturally, the bureaucracy and inertia of big financial institutions will tend to slow down the pace of Fintech-driven change. Ultimately, though, the co-option of the Fintech revolution will not diminish the scope of its impact. The technology exists to disrupt the financial value chain in the way Fintechs promised. Large incumbent financial firms will continue to control the bulk of the value in the industry, but the structure of the value chain and the way these firms compete will change drastically.

How The Revolution Will Play Out: Changing How Big Banks Compete

Many leaders in the financial industry already understand the new competitive landscape. From UBS Group (UBS) CEO Sergio Ermotti in a recent interview with Bloomberg:

“I’m totally convinced that the battleground of banking is not the front office. The battleground is the back end. There’s no understandable reason why the financial-services industry has not developed a more comprehensive sharing of the value chain.”

Financial institutions used to integrate research and execution, with much of the back-end work such as data-gathering modularized and outsourced. The vast majority of the value came from the execution of transactions, so all the back-end work was done with the aim of encouraging more trading. New technologies have already begun to disrupt this value chain, and regulations such as MiFID II will make it even more difficult to capture value by bundling services on the customer-facing side.

The revolution will manifest in the back-end. As execution and other services become increasingly commoditized, financial institutions will compete based on their infrastructure and technological capabilities. Robo-Advisors have received outsized media attention, but the future belongs to the Robo-Analysts. Wealth managers that can utilize Fintech partnerships to integrate the back-end infrastructure of data-gathering, analytics, and machine learning with their research departments will control this new integration point.[1]

Morgan Stanley (MS), in particular, has been quick to profit from the shift in the value chain. We referenced the bank’s potential value creation in our article, “The Future of Wealth Management and Morgan Stanley’s $28 Billion Opportunity.” In the 15 months since that piece was published, strong performance from the Wealth Management division has helped to push Morgan Stanley’s (MS) profitability to post-crisis highs and led to a 72% gain in its stock price. This stock price gain translates to $33 billion in additional market cap, even better than our most optimistic scenario.

How the Revolution Will Not Play Out

Just a couple years ago, Fintech startups dreamed of taking control of the value chain for themselves. Fintech companies emphasized the “tech” side while downplaying the financial element. They were the innovators, and the big financial institutions were ripe for disruption. Just read this interview with (former) LendingClub (LC) CEO Renaud Laplanche from early 2015. Here’s one of our favorite parts:

“Q. With the IPO in December, it seemed like your $8.5B valuation suggested LendingClub to be more of a tech company.

A: I think these valuations are more common for tech companies because technology-enabled companies tend to grow faster, and valuations essentially depend on revenue and margin growth. It’s worth noting that there are no banks growing at 100% each year.”

Today, Laplanche is out as CEO after a scandal involving falsified loan data, LendingClub’s revenue growth has stalled, and the company is valued at less than $2.5 billion.

LendingClub has had a notably rough time, but plenty of other Fintech companies have learned in the past couple years that the Silicon Valley adage “Move fast and break things,” doesn’t quite translate to the financial sector.

When it comes to handling people’s money, Fintech startups run into a maze of compliance, liability, and trust issues that don’t effect the rest of Silicon Valley. These issues are for more complex in the financial sector and can sink a company like LendingClub.

Meanwhile, the big financial institutions have built up decades—or even centuries—of expertise in navigating these complexities. Even when something does go wrong, as with Wells Fargo’s (WFC) fake account scandal, they have massive legal teams, advertising budgets in the hundreds of millions, and, perhaps, most important and difficult to replicate, longstanding customer relationships to help them weather the fallout.

These advantages—not to mention a much lower cost of capital—make financial institutions much more difficult to disrupt than most other industries. Now that we’ve seen a few Fintechs learn this lesson the hard way, more startups appear eager to partner, rather than compete, with the incumbents.

Why the Revolution Will Continue to Be Co-Opted

So far, Fintechs have typically found incumbent financial institutions to be willing partners. Through the first six months of 2017, corporate investors participated in over 20% of Fintech VC deals. Top US Banks such as Citi (C), Goldman Sachs (GS), and JP Morgan (JPM) have dozens of Fintech investments in their portfolios. The number of Fintechs acquired by financial institutions dwarfs the number of IPOs.

For large financial institutions, partnering with Fintechs is a no-brainer. Not only do you turn a potential competitor into a collaborator, you also get technological solutions to problems that a large organization might struggle to solve.

These solutions can have an immediate impact on the bottom line. A recent survey of 70 UK financial service providers found that 87% achieved cost cuts by partnering with Fintechs, while 54% increased revenue.

Large financial institutions with complex bureaucracies and hundreds of thousands of employees will always struggle to innovate. Fintech partnerships and acquisitions allow incumbents to outsource much of the innovation process while holding on to the bulk of the profits and, usually, all of the customers.

Figure 3 shows the actual value for the largest wealth managers in the world compared to their implied value from the regression analysis.

The nine public companies above are all among the top ten wealth management firms in the world by assets under management (the tenth, Fidelity, is a private company). Seven of the nine trade below their implied valuations based on ROIC.

Notably, the two companies trading above their implied valuations are pure wealth managers, while the undervalued companies all have significant investment banking businesses. The market may be slow to recognize the opportunity these companies have in shifting their focus towards wealth management. Ermotti described UBS as “basically the world’s most expensive investment bank and its cheapest asset manager.”

Figure 3 backs up Ermotti’s claim. UBS is the cheapest of the top wealth managers and is valued at a 53% discount to its implied valuation. It is also the only company in Figure 3 to earn our Very Attractive rating. The strong fundamentals, cheap valuation, and clear vision of the future expressed by CEO Ermotti make UBS our top-rated stock among large wealth managers.

That said, at this stage of the Fintech revolution no one can say for sure which of the big banks will come out as winners. The only thing that’s clear is the opportunity. Incumbent financial institutions that successfully partner with Fintechs to integrate and improve their back-end capabilities will save on costs, expand their market share, and capture excess value to reward their shareholders over the long-term.

This article originally published on October 5, 2017.

[1] This development is similar in many ways to Ben Thompson’s Aggregation Theory, but with one key difference. Rather than integrating forward on the consumer end as companies tend to do in Thompson’s model, large financial firms will integrate backward, controlling processes on supply side while the customer relationship becomes more commoditized.

1 Response to "Big Banks Will Win the Fintech Revolution"