Big banks are facing competitive pressures from two forces in recent years: regulators and new (fintech) competitors. Regulators have cracked down on many of the traditional activities that fueled growth in the financial sector during the pre-crisis boom. To compensate, many big banks have migrated towards more retail-like activities such as wealth management that face less regulation.

As they attempt this pivot, the banks have also found that new technology-driven entrants are putting pressure on their traditional advisory model. “Robo Advisor” startups such as SigFig, Betterment, and Wealthfront offer cheap, automated investing services that threaten to disrupt the wealth management business.

The big banks still have significant advantages though. Their brand names, financial capital, advisor networks, and large client bases give them the opportunity to leverage the innovations of these startups and become the biggest winners in this new wealth management model.

Morgan Stanley (MS) has that large installed client base. In 2009, it became one of the biggest wealth managers in the world with the acquisition of Smith Barney. As Figure 1 shows, its wealth management business has always been more profitable than its investment banking activities.

What’s more, the company has already taken the first steps towards adapting digital advice. At its current valuation of ~$29/share, Morgan Stanley has the potential to create almost $28 billion in value for shareholders if it successfully completes this digital transformation.

What used to be a profitable and growing business is now plagued by ever tightening margins as banks spend more and more money on compliance. The six biggest U.S. banks—J.P. Morgan (JPM), Bank of America (BAC), Citigroup (C), Wells Fargo (WFC), Goldman Sachs (GS), and Morgan Stanley—spent over $70 billion on regulatory compliance in 2013, more than double what they spent in 2007.

Those numbers come from a recent article in the Wall Street Journal. That same article described a town-hall meeting at Barclays (BCS) where bankers described compliance officers as “nuns with guns,” indicating the extent to which regulation has become a constant squeeze on investment banking activities.

Return on invested capital (ROIC) has dramatically declined since the financial crisis for the big banks. In 2006, they earned an average ROIC of almost 15%. Last year, their profitability had been cut in half, at ~7.5%.

Wealth Management Is The Way Forward For Margin Expansion

Before the financial crisis, Morgan Stanley’s small Wealth Management division was highly profitable, while the much larger Institutional Securities division was not as profitable due, in no small part, to massive bonuses for its many investment bankers.

After the financial crisis—and the Smith Barney acquisition—the Wealth Management division’s ROIC fell, but it remained in the double digits. Institutional Securities, on the other hand, has failed to achieve an ROIC above the company’s WACC every year since 2006.

As Morgan Stanley reorients itself towards a greater focus on wealth management, it will need to bridge the gap between the value that advisors believe they deliver and what clients say their priorities really are. As a recent report from EY shows, advisors put a much higher priority on regular interaction and personalized understanding, whereas clients are more concerned with performance, transparency, and fees.

Another interesting finding from the report is that clients see the most beneficial use of social media as a forum to connect with other clients to ask questions and share experiences.

These findings suggest that Morgan Stanley, which currently has the largest advisory force of any firm, will need to undergo a major cultural shift to meet the needs of more digitally active clients. A failure to do so could lead to a mass exodus of clients as wealth transfers to the younger generations. However, it also opens up the possibility for major gains in margins and efficiency.

A truly comprehensive digital transformation would be one that embraces automated portfolio management, full transparency in fees and holdings, and a robust online community the enables clients to find and share information easily. Such a transformation could lead to significantly larger margins by allowing Morgan Stanley to further reduce its advisor count (a process that can happen organically with 25% of advisors near retirement age), as well as maintaining fewer physical branches.

Robo Advisors own a very small fraction of the market right now, but their share is growing rapidly. Just as importantly, their emphasis on low fees is already forcing more traditional advisors to adapt.

We can see this focus on low fees play out in Morgan Stanley’s financial statements. Between 2008 and 2015, fee-based accounts—which tend to be less lucrative than accounts that pay commissions per trade—went from 25% to 40% of its assets under management. In just the past three years, the average fee rate on those accounts has fallen from 77 basis points to 74.

The old advisor model won’t work in this new world of falling fees, and it’s clear Morgan Stanley already knows that. The company has been steadily reducing its advisor headcount and number of retail locations since 2009. In that time, it has increased its revenue per representative by 6% compounded annually.

In January, Morgan Stanley hired Naureen Hassan, the executive that led Charles Schwab’s own Robo Advisor launch. Hassan will help spearhead a digital overhaul that will use automated investing services—along with a number of other digital tools—to complement its existing advisory force.

This digital overhaul comes at a particularly sensitive time in the wealth management business. At the moment, Morgan Stanley has about 10% of the wealth management market for high net-worth individuals. However, the wealth management industry could face a major upheaval in the coming years with an unprecedented intergenerational wealth transfer as baby boomers begin to pass down money to their children. 66% of children fire their parent’s advisor after receiving an inheritance, which means there’s an opportunity for Morgan Stanley to gain (or lose) market share.

In addition, technology promises to grow the wealth management pie by enabling banks to profitably serve lower net worth individuals. Robo Advisors are a perfect example of a disruptive innovation. By automating much of the portfolio management process, they’ve been able to meet the needs of lower-end customers that traditional wealth managers have typically ignored, and now they’re moving up the income ladder.

Failure to adapt to changing technologies could lead to Morgan Stanley getting squeezed out of its most profitable business. On the other hand, a well-executed digital overhaul could allow Morgan Stanley to gain market share from traditional competitors, expand its potential customer base, and cut costs.

Modeling The Potential Value Creation of The Strategy Shift

To understand the value that a digital overhaul could create for Morgan Stanley, it’s important to understand the drivers of market valuation. While things like news, quarterly earnings, and sentiment might create short-term fluctuations in stock prices, ROIC is the primary driver of long-term value.

Figure 2 shows that ROIC explains 96% of the differences in Enterprise Value/Invested Capital (a cleaner version of price/book) for the six largest US banks. Morgan Stanley has exactly the valuation one would expect from that chart given its ROIC and the regression equation.

This allows us to easily quantify the potential value creation for Morgan Stanley from a truly comprehensive digital overhaul. Figure 3 shows the expected stock price for four different scenarios: 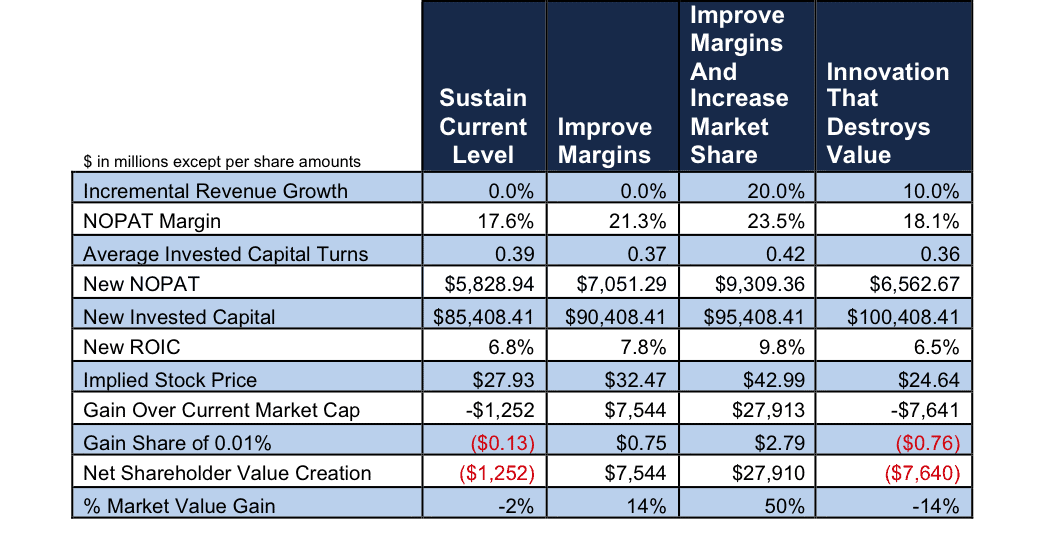 Figure 3 shows that even Scenario 2, with margin improvement but no revenue growth, delivers almost $8 billion in additional shareholder value. A full transformation that manages to decrease advisor compensation costs and attract new business could be worth nearly $28 billion. See the full details of our model scenarios here.

It’s worth noting how modest these scenarios really are. 20% revenue growth for Morgan Stanley represents about $7 billion in additional revenue. EY estimates the global revenue opportunity for wealth managers to be in the range of $175-$200 billion. Morgan Stanley just needs to claim 4% of this pie.

In addition, it’s worth noting that Morgan Stanley and the other big U.S. banks are valued significantly lower than other financial institutions and the S&P 500 in general (See Appendix A for details). The intense regulation they face has clearly caused them to be priced at a discount to the rest of the market. Continued growth in the less regulated wealth management business could convince investors to value Morgan Stanley at an even higher EV/IC multiple.

On the other hand, a mismanaged foray into the robo-advisory space could also destroy value. The final scenario in the table shows what could happen if the cost of Morgan Stanley’s digital transformation goes overboard and the company fails to recognize the capital and cost savings from closing branches and reducing its advisor count.

Figure 3 also analyzes how management might consider compensating those that help execute this digital overhaul. Rather than pay traditional rates and fees, one could propose a gain share model to ensure your consulting partners are aligned with increasing ROIC.

Morgan Stanley’s shifting focus towards Wealth Management is the result of both the carrot and the stick. Changing technologies and intergenerational wealth transfers create significant opportunity, and heavy regulations have made it hard to earn satisfactory returns in its more established Institutional Securities business.

This report provides an outline for how developing a robo-advisor and embracing other digital technologies could allow Morgan Stanley to cut costs, attract new business, and create significant value for its shareholders.

After several years of lagging ROIC, low growth, and lagging stock performance, we believe shareholders would welcome a digital overhaul of the Wealth Management division that focuses on maximizing ROIC.

Appendix A: Implied Values Based on Linear Equations from Regression Analyses

Figures I – III show how we calculate the implied share prices and ROIC based on the three regression analyses in this report. Click here for the original spreadsheets with all calculations and details.

Figure I: Implied Stock Price and Upside for MS Based on Linear Equations from Regressions

Figure II: Implied ROIC for MS Based on Linear Equations from Regressions 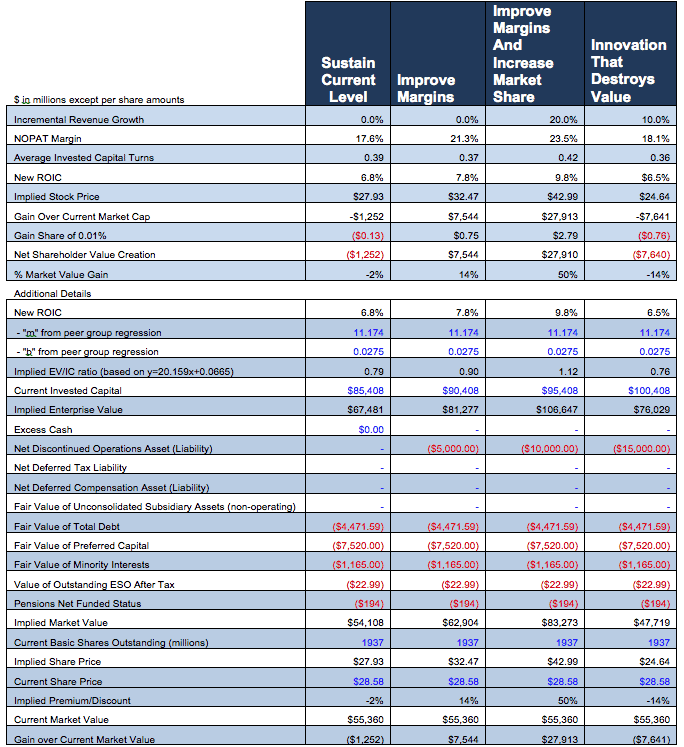 Figures IV and V show additional regressions of ROIC vs. Enterprise Value/Invested Capital (a cleaner version of price-to-book). The relationship between ROIC and valuation holds quite strongly on larger groups of stocks. Figure V shows that ROIC explains 54% of the changes in valuation for the stocks in the S&P 500.

Verify the data and regression analyses in the original spreadsheet here.

This regression framework for stock valuation was first introduced long ago by folks with much more impressive pedigrees than ours: McKinsey’s Valuation Handbook, Bennett Stewart’s Quest For Value, Credit Suisse’s Michael Mauboussin’s ROIC Patterns and Shareholder Returns. The innovation we bring to the table is modeling ROIC, free cash flow and GAP, etc. with scale. 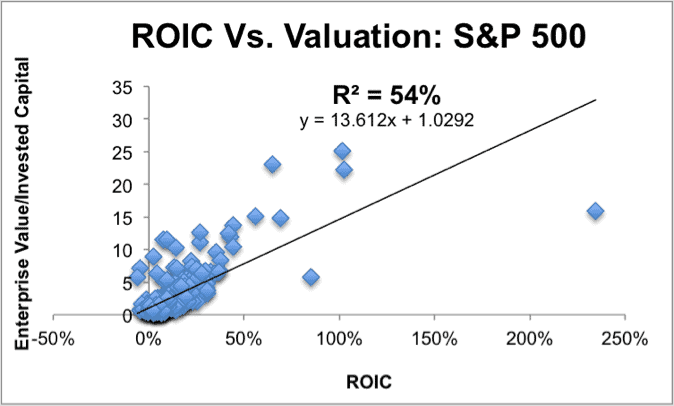 Figure V (r-squared is 68%) shows that the explanatory power of ROIC for stock prices remains strong when we narrow the focus to large cap financial stocks. 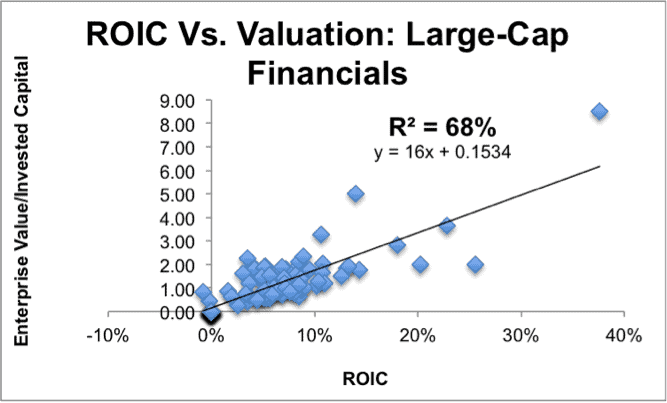