We closed this position on August 22, 2018. A copy of the associated Position Update report is here.

Athenahealth (stylized as athenahealth) is a cloud-based provider of software and services to the health care industry. Specifically, athenahealth is an electronic health record management company with cloud-based practice management and patient communication services. Although the stock has fallen 39% from its highs in February 2014, we think it has much further to fall.

It’s hard to short cloud stocks in this environment, and we’ve been burned before. However, there are a few tailwinds that athenahealth has been benefitting from that have disappeared, making this stock’s short prospects even better. Increased competition in the healthcare cloud services space has eroded athenahealth’s profitability and the company’s future looks much less profitable than it did several years ago.

Athenahealth operates in a subset of the Technology sector that serves the health care industry through the provision of electronic health records, or EHRs. This market is further broken down into companies that serve primarily inpatient customers (think large hospitals and institutions) and ambulatory customers (physician practices and clinics). Athenahealth’s customers are primarily in the ambulatory market.

Athenahealth has four main segments that collect payments from physicians’ customers, manage EHRs, communicate with patients and manage referral cycles. All four of these together are referred to as “Business Services,” and comprise a majority of the company’s revenue. Athenahealth’s revenue is generated by charging a service fee based on the percentage of a physician’s bills collected.

Revenue Growth is Becoming Too Expensive

Athenahealth, like many cloud companies, has seen some impressive revenue growth over its lifetime. However, while athenahealth was once growing revenues by 39% annually, growth in 2014 slowed to 27% annually.

Athenahealth’s NOPAT margins have fallen each year from 6% in 2011 to 0.5% in 2014. Revenue growth that once came cheap and easy is now expensive. The company has a cumulative -$652 million in free cash flow since going public in 2007.

A classic lesson from Finance 101 is that a highly profitable business attracts new entrants. This is undoubtedly what’s been happening at Athenahealth, as a multitude of EHR companies have entered the market, which has placed pricing pressure on athenahealth’s offerings.

As shown in Figure 1 below, competition has destroyed athenahealth’s economic profit: 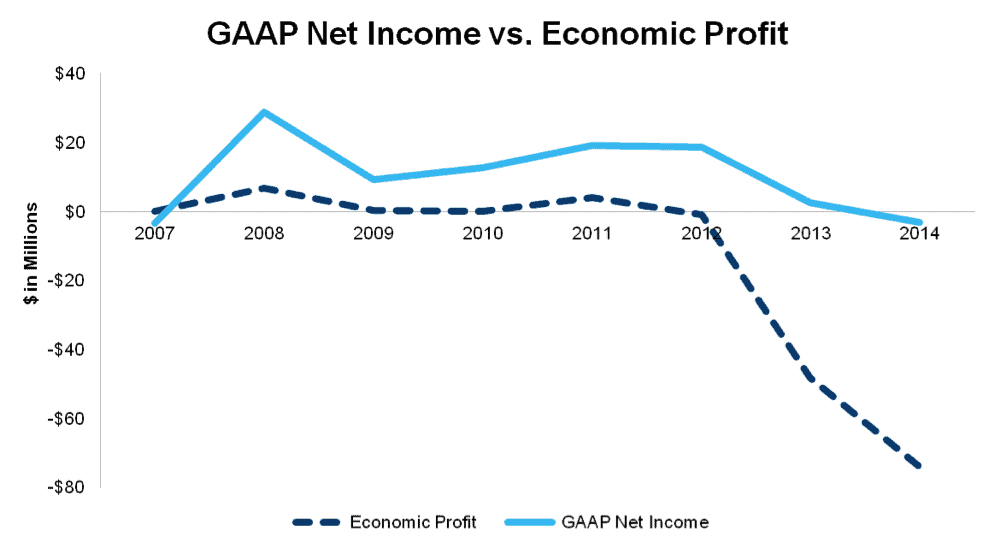 The first is government subsidies. EHR providers have been riding a wave thanks mostly to Uncle Sam as acts such as the Health Information Technology for Economic and Clinical Health Act (HITECH) resulted in over $30 billion of government funding to upgrade EHRs. Athenahealth especially has been cashing in on the adoption of EHRs. However, this short-term tailwind is set to disappear, as the bill’s funding is running out. A few years ago when HITECH was enacted, doctors were paid $44,000 to implement and use an EHR. Late last year this dropped to $24,000, and in a few months the incentive will disappear altogether.

The second tailwind is positive publicity in the eyes of the health care industry. In 2005, EHR giant Cerner (CERN) and other companies paid for a report by the RAND Corporation that predicted substantial efficiencies resulting from the adoption of electronic health records. This report helped drive growth in the EHR business and the billions of dollars from the HITEC act. Cerner’s revenue tripled from 2005 to 2013, while athenahealth’s increased six fold from 2007 to 2013.

However, a 2013 reassessment of the 2005 report by the RAND Corporation said that the conversion to EHRs had failed to produce savings and had mixed results in terms of efficiency and patient care. Accordingly, the revenue growth of many EHR companies — Cerner, athenahealth, and Allscripts (MDRX), for example — is slowing or has stopped altogether. In athenahealth’s case, revenue growth has slowed across the past five quarters: from 48% in 4Q13 to 24% in 4Q14. The company is projecting around 20% revenue growth for all of 2015, far below its 30% target from 2012.

While athenahealth is focused on the smaller ambulatory market, companies like Cerner and Epic Systems (a private company) have the larger inpatient customers. Allscripts is perhaps the most similar competitor to ATHN given that they both have large market shares in the ambulatory EHR space and not within large hospitals.

Figure 2 below compares athenahealth with Allscripts, and then the two with Cerner, which focuses on large inpatient clients.

Note how low margins are in the ambulatory EHR space. Allscripts is seeing very similar margin compression to athenahealth with NOPAT margins having declined every year since 2010.

Now note Cerner’s margins. This is the market athenahealth must break into if it is to achieve anywhere close to what its stock’s valuation implies. Athenahealth will have a lot harder time attacking larger customers, which are already hooked by Cerner and Epic’s complex systems that will be costly to change over.

Allscripts has more than 180,000 physician users and has solutions in 2,700 hospitals and 13,000 extended care organizations, while athenahealth has just over 62,000 users. As a comparison, nearly 190 million American medical records, more than half of the United States population, are already stored using Epic Software Solutions. Roughly 275,000 doctors are already using the software as well, which illustrates the uphill battle that athenahealth has to break into this market.

These Adjustments Impact Our Thesis on athenahealth

We made several adjustments to athenahealth’s reported financials in 2014 to ensure that our picture of the company’s fundamentals is as clear as possible. Our NOPAT calculation of $4 million is actually higher than athenahealth’s reported loss of -$3 million due to the removal of $5 million in non-operating expenses and $5 million in implied interest expense from operating leases. In other words, even though our data shows that the company made money last year, we’re still bearish.

In addition, athenahealth has $209 million in reported debt, but $110 million in off-balance sheet debt from operating leases brings athenahealth’s total debt to $319 million, or over 7% of the company’s market value.

To justify its current price of $127/share, athenahealth must grow NOPAT by 60% compounded annually for the next 12 years. Under this scenario, we assume that athenahealth will achieve 10% pretax margins going forward, equal to its all-time high margins achieved in 2010.

If athenahealth can, instead, achieve pre-tax margins of 5% (still five times higher than its current margins) and grow NOPAT by 23% compounded annually for the next 20 years, the stock is worth just $15/share, an 88% downside from current levels. Remember that athenahealth is on track to achieve around 23% revenue growth this year after six consecutive quarters of revenue decline. 23% extended profit growth looks optimistic when considering the competition in the space and the downward trend in athenahealth’s revenue growth and profits.

Athenahealth currently has no dividend and no buyback. It’s possible that a larger competitor will buy out the company, but that looks unlikely at these inflated valuations. An acquirer will likely wait until some of the investor optimism around the stock subsides, or until athenahealth acquires even more clients at a loss to make what is perhaps the company’s largest asset — its client list — even more valuable.

We can identify a few forces that might cause athenahealth’s bubble to pop. As we mentioned earlier, revenue growth slowed to 24% in the most recent quarter. If this continues to lag behind athenahealth’s promised rate of 30%, investors will jump ship. A catalyst for this event is the existing HITEC subsidies for EHR adoption running dry. Finally, athenahealth insiders could dump even more stock (see below).

In the past six months, insiders have bought no shares and sold 161,000 shares, a net decrease of 26% of insiders’ total holdings. Included in this group is the company’s CEO Jonathan Bush, who has continuously dumped $4 million in stock since the beginning of 2014.

Short interest stands at 9.7 million shares, or almost 26% of float.

The following ETFs and mutual funds allocate significantly to ATHN and earn our Dangerous or Very Dangerous ratings. Note that we recently featured ARKK in our list of the five riskiest ETFs.

Allen Jackson contributed to this report.

Disclosure: André Rouillard and Allen Jackson receive no compensation to write about any specific stock, sector, or theme.

Correction: A previous version of this report erroneously stated that athenahealth’s revenue growth had declined across the last six quarters. This has been amended to the the past five quarters.