Amazon.com (AMZN) is in the Danger Zone. The belief that Internet retail is or will be more profitable than traditional retail is untrue. Amazon is in a competitive, low margin business that cannot justify the profit growth implied in its valuation.

Stuck With a Low Margin Business

Amazon’s after-tax (NOPAT) margin is a paltry 1%, ranking 1428th out of 1515 US companies that I cover with at least $1 billion in market cap. Out of 178 retail comps, its margin ranks 154th. For comparison, AMZN’s market cap ranks as the 26th largest out of all 3000 stocks I cover and ranks third amongst the 178 retail comps. Can you smell the disconnect?

As Figure 1 shows, back in 2004, Amazon’s NOPAT margin was a robust 6.6%. At that point, Amazon and eBay (EBAY) were fairly dominant players in online commerce. Amazon could price items high enough to maintain a higher margin without sacrificing market share growth. That is not the case anymore, however, as companies like Walmart (WMT), Target (TGT), Walgreens (WAG) and other brick-and-mortar stores have gotten into the online retail game. In the last few years, Amazon’s profits have fallen as margins plummeted. Since 2004, NOPAT has grown only 3% per year on average while revenues have grown 30% compounded annually. 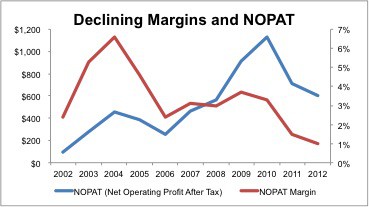 Amazon has always been forthright about its strategy to keep margins low to facilitate market share growth.

The question today is about future margins and whether they will ever be high enough to justify the current stock price. Many Wall Street reports written at the turn of the century praised the superior cash flows and margins of Amazon’s online business model. Amazon broke and continues to break new ground in retailing, and the stock’s valuation has lived up to the hype.

Online Retail Capabilities Are No Longer A Differentiator

Times have changed for Amazon and for retailing, in general.

Amazon’s competitive position is much weaker today as the barriers to entry in online retail are low. There is not much that Amazon can do that its competitors cannot eventually copy. Remember the 1-Click buying capability? I am not sure how much that moved the needle if at all.

There is nothing very special about an online retailing model anymore. Most anyone can do it. Sure, most firms may not do it as well as Amazon, but I do not believe that Amazon’s offerings are superior enough to justify the higher margins that many investors expect.

Competing Only On Price

At the end of the day, Amazon is just another “generic” retailer in a world where content is king. Until Amazon has exclusive access to content for which people are willing to pay a premium, they compete only on price. And that strategy will never yield as high margins as the company must achieve to satisfy investors.

By “generic” retailer, I refer to the fact that Amazon is simply a middleman for other firms’ products, and consumers can get most anything that Amazon sells from another retailer. As a result, Amazon can differentiate itself from all the other retailers in only two ways: better product access and price. I think it is fair to say that Amazon offers better product access than any other major retailer. However, that superiority has not yet translated into the ability to exact premium prices. Indeed, the company has relied upon lower prices as the primary incentive to lure shoppers to their offerings, including cloud services. The new cloud services also are “generic” because they are non-rival goods, which means that no one can have exclusive ownership of them. Unlike petroleum reserves, for example, which only one firm can own because they cannot be replicated, there is a potentially unlimited supply of computing power and storage. So, price will be the primary differentiator for these products and services as well as suggested by the scale Amazon is attempting to create in this space.

The problem with the low-cost provider strategy is that while Amazon is subsidizing the cost of incentivizing consumers and businesses to go online to shop or use cloud services, its competitors are building comparable capabilities. As those capabilities are increasingly easier to build, it is increasingly difficult for Amazon to differentiate its product access. Just about anyone can sell products online, and its only getting easier. The number of cloud services providers is growing too.

Amazon has also attempted to create exclusive products, like its new original TV shows. Whereas Netflix (NFLX) has had success with House of Cards and the much-hyped fourth season of Arrested Development about to be released, Amazon’s highest profile offering, Zombieland, bombed. This attempt shows what can happen when a company moves away from its primary area of expertise in search of better margins.

My key point is not that Amazon’s website or its fulfillment capabilities are bad. On the contrary, I think they are among the best. My point is that they are not good enough to keep an online shopper from going to another site with a lower price for the same product. I do not think it is possible for Amazon, or any firm, for that matter, to prevent online buyers from taking the lowest prices especially now that shoppers can use Google (GOOG) to get prices from multiple retailers within seconds on most products. Many shoppers will never go to Amazon.com if they see a lower price offered by another site.

Competing With Wal-Mart And All Other Low-Cost Retailers

Competing on price is not where many companies want to be, especially in a world with Wal-Mart (WMT).

Wal-Mart (WMT) has long been the world leader in low pricing. It is one of very few firms with the distribution and fulfillment capabilities required to match or beat Amazon on price. And there is no reason to believe they cannot beat Amazon on price for the products they both sell.

Needless to say, competing with Wal-Mart on price is not a very profitable place to be. Nor is competing with all the other retailers, large or small, online or offline in an increasingly digital world where pricing is so transparent.

To the argument that Wal-Mart’s physical stores handicap it by tying up capital, I reply that its brick-and-mortar presence provides certain types of product access that Amazon cannot offer. For example, returning or exchanging goods bought online is much easier at an actual store. In addition, the stores enable an estimated 8% of American households—and 25% of Wal-Mart’s customers—who do not have a bank account or credit card to pay cash for goods bought online. Maybe the best model is to have both digital and tangible delivery models. Wal-Mart’s success with the tangible model speaks for itself.

Valuation Is The Big Issue Here

Amazon’s competitive position is of concern because of the dangerously high valuation of its stock. As I wrote last week about Apple (AAPL), Amazon is a great company, but that does not mean AMZN is a great stock. It is not. The expectations for future cash flows in AMZN are dangerously high, and investors should sell.

At $267/share, Amazon’s stock price implies future cash flows and margins that even the most ardent bull would have trouble betting on. Allow me to illustrate this point with three scenarios for how Amazon could justify the value of its stock. I would not bet on any of them coming true.

1)     Margins stay roughly the same: If we assume that Amazon’s NOPAT margin averages 1.4%, close to its current level, then it would need to grow NOPAT by 25% compounded annually for nearly 25 years. At that point, revenues would be $3.8 trillion, nearly 10x that of Wal-Mart’s in fiscal year 2012. Nothing is impossible, but this scenario seems highly improbable.

3)     Margins rise to Wal-Mart’s level: At Wal-Mart’s 4.1% margin, Amazon would need to grow NOPAT by 20% compounded annually for 20 years, bringing revenues up to $432 billion, or 90% of Wal-Mart’s revenues for 2012. I don’t see Amazon getting its margins to that level as very likely. I doubt they can get their costs below Wal-Mart’s, so Amazon would need to raise prices to achieve these margins. How can they grow market share with prices higher than competitors?

Under the most generous of these scenarios, Amazon has to become nearly as large as Wal-Mart is now. Our economy already has one Wal-Mart: is there room for another?

In many ways, Amazon is a victim of its own success. As the paragon of Internet retailing, Amazon inspired other retailers to build an effective online business or risk going out of business. There was a time when Amazon seemed to have an insurmountable lead in online retailing but not anymore. As the distinction between online and brick-and-mortar retail becomes less meaningful, Amazon becomes just another low-margin generic retailer.

As I wrote above, Amazon is still a great company, and there’s no reason that it cannot remain the largest online retailer in the world. That status is nice for company fans but largely irrelevant to investors.

Stock investors must decide whether they believe that Amazon will grow its cash flows more than what is already baked into the stock price. If so, they should buy. If not, sell. That choice appears obvious to me.

Investors should also avoid these 24 ETFs and mutual funds due to their 7% or more allocation to AMZN and Dangerous-or-worse rating.