We closed this position on August 15, 2018. A copy of the associated Position Update report is here.

InnerWorkings (INWK), a new addition to the Most Dangerous Stocks for September, is in the Danger Zone this week. INWK is a classic “roll-up” story that enriches corporate and Wall Street insiders while destroying shareholder value. The company is buying up competitors in the fragmented print management industry to boost EPS and give the illusion of growth.

Wall Street firms can profit enormously from roll-up plays because they result in lots of acquisitions and stock trading activity. At the heart of most roll-up plays, there is a company that buys up lots of other companies within a fragmented industry with the stated goal of creating efficiencies, economies of scale and/or more bargaining power with suppliers, customers and/or regulators.

Wall Street investment bankers get their healthy commission on every acquisition. The trading desks enjoy healthy commissions from heavy trading in the stock. Research departments play the role of touting the strategic benefits of the roll-up strategy and extolling the EPS growth it creates so that large institutions will buy and hold the stock.

The roll-up strategy for INWK has worked to perfection so far. There have been many acquisitions. The stock trades with good volume and has maintained a high P/E on the back of strong institutional ownership. The 10 largest institutional holders of INWK control over 60% of outstanding shares. These institutional buyers help prop up the stock price so that the company maintains a high P/E ratio. Even though INWK is down 30% over the past 6 months, its trailing twelve months P/E remains high at just over 40.

Maintaining a high P/E is a crucial part of the roll-up strategy. As long as INWK buys companies with a lower P/E than itself, it benefits from the High-Low Fallacy. This fallacy is an accounting loophole that enables a company to show a merger as earnings accretive—i.e it boosts reported earnings per share—with almost no regard to the impact on the underlying economics of the business. Figure 1 shows how this loop hole enables Innerworkings to appear to be growing profits though they are really destroying value.

Figure 1: EPS on the Rise While Cash-On-Cash Returns (ROIC) Decline 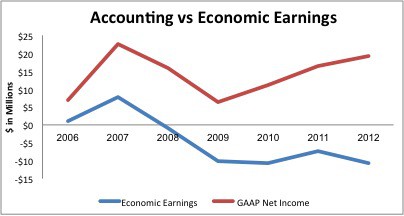 INWK’s constant stream of acquisitions—as well as some funny accounting—helps to line executive pockets as well. INWK doles out executive bonuses based on two criteria: revenue growth and adjusted EBITDA.

INWK’s acquisitions constitute a major source of its revenue and EBITDA growth. Page 21 of INWK’s 2012 Form 10-K describes its revenue growth in 2011 and 2012. For both years, acquisitions are referenced as a significant factor in driving INWK’s growth. In addition, INWK has made use of questionable accounting practices to boost revenue about which the SEC has raised concerns.

On the EBITDA side, the company boosts that metric by excluding stock-based compensation expense. In 2012, INWK’s recorded $6.2 million in stock-based compensation, or 14% of adjusted EBITDA. INWK executives are lining their pockets with stock options and then excluding that option expense so they can earn their cash bonuses as well. Nice double dip.

Meanwhile, the CEO is cashing in on the company’s high P/E while selling 40% of his holdings all the while touting that INWK has “the opportunity of a lifetime” for growth.

Figure 2 shows how shareholder value has been destroyed over the past five years even as executive compensation has jumped.

Figure 2: What Happens When Comp Targets Are Manipulated

3)     Excessive goodwill: INWK has made acquisitions worth a total of $120 million since 2006, which has resulted in goodwill and other intangible assets making up nearly 50% of INWK’s total assets. With so much goodwill on its balance sheet and the liquidation of the contingent consideration accounts (per above), INWK could face some major asset write-downs in the near future.

4)     Poor disclosure: INWK does not breakout its inventory. This breakout would enable analysis of the type of inventory they hold from their suppliers and establish the validity of gross accounting recognition, which as mentioned above the SEC has concerns with. All of INWK’s competitors break out inventory in their filings. INWK also does not breakout “other assets” and “other liabilities”, so investors have no clue what these assets and liabilities are. The fact that the company routinely discloses less than its competitors is a red flag.

INWK operates in a crowded field with little differentiation. Although it claims that its proprietary software system to match clients and providers is a disruptive innovation, that statement looks like smoke and mirrors to keep the roll-up strategy gravy train rolling for the Wall Street and corporate insiders.

The current market valuation for INWK suggests investors believe the company will suddenly begin to create lots of value though it has not in the past. To justify ~$10.50/share, INWK would need to grow after-tax profit (NOPAT) by 15% compounded annually for 23 years.

If the company fails to meet the high growth expectations set for it, the stock could see some downward momentum before too long. If the institutional support evaporates (and the CEO selling could be a sign that is coming), this stock could fall well below the $10 floor that has held it up so far.

INWK is a potential short candidate, but a dangerous one. It has extremely high short interest and a large amount of institutional ownership, which makes it a definite target for a short squeeze. Long-term, however, I don’t see a way for the stock to maintain its inflated valuation.

The following funds should be avoided due to their high allocation to INWK and Dangerous or worse rating.

Sam McBride and German Perez Vargas contributed to this report.