Check out the Danger Zone Interview with Chuck Jaffe of Money Life and MarketWatch.com.

Mobile game developer Glu Mobile (GLUU: $5/share) is in the Danger Zone this week. GLUU has ridden a wave of optimism after hit games “Deer Hunter”, “Dino Hunter”, and “Kim Kardashian: Hollywood” have grown revenues rapidly and sent the stock up 50% this year. In all the enthusiasm, many investors have ignored the long-term risks to GLUU’s business model. Think of Zynga (ZNGA) without the real estate assets to provide a bottom for the stock.

The problem with valuing game developers is that their revenues can be fairly irregular. One big hit can have enough of an impact to overshadow longer-term trends. In its seven-year life as a public company, GLUU has already had two big spikes in revenue, as shown in Figure 1. 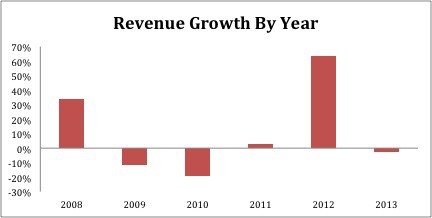 In 2008 and 2012, GLUU saw revenue growth of 34% and 64% respectively. After each of those big years, revenue declined the following year.

Notice that I’ve said nothing about profits, and that’s because there are none. GLUU has yet to turn an annual profit. Even with its impressive revenue growth this year, GLUU has continued to lose money in 2Q14. Royalty payments to Kardashian, who reportedly is due 45% of the profits from her game, should increase costs significantly for the rest of the year.

GLUU has averaged -$22 million in free cash flow annually over the past six years, which has necessitated the selling of more and more stock. GLUU has already doubled its outstanding share count since 2009, and its recent acquisition of Cie Games diluted shareholders by another 10%, as GLUU paid most of the acquisition price in stock.

Why The Business Model May Never Work

I’ve argued several times before that it’s incredibly difficult to consistently create and monetize original content. Former hit producers such as DreamWorks (DWA) and ZNGA are now struggling, and while Netflix’s (NFLX) early forays into original content have had some success, they’ve also increased costs significantly. The most profitable content producers (companies like Disney (DIS)) have strong brand recognition, the ability to spin-off their successes into long-running franchises, and high barriers to entry. Mobile gaming has none of these cornerstones to creating a viable (i.e. profitable) business model.

1)     Branding: People might have some loyalty to a movie studio. People will go see a Pixar movie just because it’s Pixar. Zynga’s decline proves people don’t download a game just because they’ve played one by that developer before.

3)     Barriers to entry: Flappy Bird was made by one Vietnamese developer in a few days, and yet hit #1 on the iTunes app store. The expertise, resources, and time required to develop a mobile game is extremely low compared to other media.

Number three highlights another big issue for mobile game developers: no one really knows what makes a successful game. Sure, now that it’s a hit everyone gushes over the brilliant marketing strategy that made “Kim Kardashian: Hollywood” a success, but prior to its launch GLUU was actually mentioning its Hercules movie tie-in game more prominently in press releases. Hercules has already dropped out of the top 100 on the free downloads chart on the iTunes store despite coming out more recently. Even Kim Kardashian: Hollywood shows signs of fading, having fallen from the top four top grossing iOS games down to seventh.

Bulls have argued that GLUU could get into mobile real money gambling, which would lead to more consistent profits, but people made similar arguments about ZNGA. If mobile gambling ever does happen, ZNGA actually seems the more likely to profit, given its popular poker game.

The valuation and expectations are sky-high for GLUU. The precipitous drop in the stock last Thursday despite beating EPS expectations is not a surprise when a stock is as expensive as GLUU . Our DCF model quantifies just how high the market’s expectations for GLUU really are.

To justify its current valuation of ~$5/share, GLUU must achieve pre-tax margins of 20% (currently margins are -19%%) within five years and grow revenue by 25% compounded annually for 11 years. 20% is the all-time high (from back in 2004) for Electronic Arts (EA) over the past 15 years.

More specifically, our estimates include 100% revenue growth in 2014 followed by 20% per year after that. Look at Figure 1 again. Does it really seem likely that GLUU will be able to deliver even bigger games next year after its big hits in 2014? And even if it does manage that revenue growth, can it deliver those high profit margins? And can it maintain both for over a decade?

Even if GLUU were to cut both its product development and marketing expenses in half, it would only be earning pre-tax margins of ~15%. If we use that lower number as their long-term margin, and slow revenue growth to 15% compounded annually for 15 years, the stock is worth just $2/share.

Even those expectations seem highly optimistic. GLUU could easily never turn a consistent profit and go to zero someday. Unlike Zynga (ZNGA), which owns valuable real estate, GLUU lacks significant tangible assets to create a floor for the stock.

Insiders have sold 4.4 million shares, or about 20% of the shares they hold, over the past year. A large portion of these sales occurred when the stock first spiked above $5/share in early February, a sign that management was eager to cash out at those levels.

For the short-term oriented trader, GLUU is a rapidly growing company on the path to profitability. For the long-term investor, GLUU is a company with no profits, moderate growth, and management that consistently destroys shareholder value by diluting their equity. Not sure about you, but I prefer not to gamble with my investments. I recommend you avoid GLUU too.

Disclosure: David Trainer is short GLUU. David Trainer and Sam McBride receive no compensation to write about any specific stock, sector, or theme.