Check out this week’s Danger Zone Interview with Chuck Jaffe of Money Life and MarketWatch.com.

We’ve made no secret about our bearishness on certain cloud stocks. Over the past several months, we’ve featured Callidus (CALD), Netsuite (N), Salesforce (CRM), and Tangoe (TNGO) in the Danger Zone. On average those stocks have dropped 14% since our calls. The cloud sector as a whole has been beat up with the First Trust ISE Cloud Computing Index ETF (SKYY) down 7% over the past month while the S&P 500 is down only 2%.

This week’s Danger Zone stock, Workday (WDAY: $75/share) has been hit worst than most. Over the past month it has dropped 25%. Some investors might be tempted to “buy on the dip here”, but they should resist that temptation. WDAY remains significantly overvalued and has much farther to fall before it reaches a valuation supported by its fundamentals.

Anyone familiar with the sector knows that most of these high-flying cloud stocks don’t make any money, and WDAY is no exception. WDAY actually is in worse shape here than most of its competitors. Its after-tax profit (NOPAT) margin currently stands at -32%, which is worse than N at -13%, CALD at -9%, and CRM at -4%.

The argument WDAY bulls assert is that profits don’t matter now as WDAY is boosting spending on sales and marketing and product development to spur revenue growth, which was 71% last year. Figure 1 shows the difference between WDAY’s expenses and those of a mature company like Oracle (ORCL). 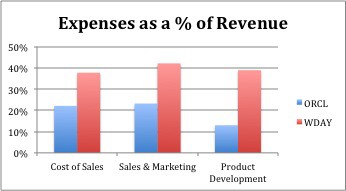 We can see from figure 1 that WDAY spends, as a % of revenue, nearly double the amount of Oracle on Sales & Marketing and nearly triple on Product Development. It’s gross margin is also significantly lower as 24% of WDAY’s revenue still comes from its very low margin Professional services segment, which exists more to retain customers than to actually generate cash flow.

Bulls will argue that if WDAY just cut down those two expenses, Sales & Marketing and Product Development, it could instantly be profitable. WDAY could reach profitability by cutting those two expenses to the same % of revenue as Oracle; however, the company’s after-tax profit (NOPAT) would be a meager $40 million. Remember, this is a company with a market cap of nearly $14 billion. The current valuation makes no sense.

Even after dropping 25%, WDAY’s valuation remains far too high. To justify its ~$75/share valuation, WDAY would need to grow revenue by 40% compounded annually for the next 10 years while working its way up to a 9% NOPAT margin.

I find it awfully hard to believe that WDAY can continue its high rate of revenue growth for another 10 years. The NOPAT margin goal is feasible, but to do so WDAY would have to cut its marketing expenses, which would in turn slow revenue growth.

The point here is that this company cannot maintain high revenue growth while also achieving profitability. We have seen how this game has ended for other tech companies like Salesforce.com (CRM), Amazon (AMZN) and NetFlix (NFLX). All those companies sacrificed profitability for growth with the promise that one day they would be very profitable. And, yet, all three have achieved no better than 4th or 5th quintile ROICs. Back in 2006, CRM was roughly in the same place as WDAY is today, with high growth and no profits. Sure enough, eight years later CRM continues to lose money.

Companies like WDAY and CRM have been able to operate at a loss for years because investors have chosen to tolerate the losses. Momentum buyers have taken the company line and pushed the stocks up. Low interest rates have made it easy to borrow to maintain liquidity, and executives have been compensated generously. In 2013, WDAY’s top four highest earning executives made $23 million, mostly in the form of restricted stock grants. When executives are rewarded for losing money, what incentive do they have to turn a profit?

Catalyst: Market Has Fallen Out of Love With the Momentum Stocks

Companies with no profits commanding market caps in the tens of billions only happen in bull markets. When investors get skittish, these high-flying stocks are the first to get crushed as we’ve already seen this year.

While I don’t expect a full on bear market, I do think we’re seeing the start of a major correction in several areas that have reached dangerously high levels of valuation. Cloud stocks, along with social media stocks and REITs, are going to keep falling because they don’t have the fundamentals to support their stock prices.

Additionally, WDAY has diluted its stock quite aggressively. WDAY has over 20 million employee stock options outstanding, equivalent to a liability of $1.3 billion (nearly 10% of its market cap) at its current price. If we take into account its secondary stock offering last year, WDAY added 18 million shares in 2013, diluting its stock by another 11%.

WDAY’s reliance on issuing stock, both as a form of compensation and as a way to raise money, could create a negative feedback loop if the stock price begins to fall quickly. In order to compensate its employees as well, WDAY will have to issue even more stock options, diluting the shares further and causing the stock to drop even more.

Momentum was the only thing supporting WDAY’s stock, and now that the momentum is gone, look out below.

Falling Into the “Sector Theme Trap”

Last year I discussed the “sector trap” in my analysis of Williams Companies (WMB). Investors are liable to look at a high growth sector and think that any name in the sector is automatically a good investment. When investors and analysts fall into this trap, fundamental research suffers and stocks can reach untenable valuations, which is exactly what has happened with the cloud stocks.

Even if a sector is growing rapidly, as the cloud computing sector certainly is, individual companies within the sector can wind up being losers. What’s worse, it is almost impossible to identify who these losers are going to be. One can draw comparisons to many new, emerging sectors from the past from automobiles to personal computers. And in nearly every instance, a company that’s on top one year finds itself at the back of the pack in the next.

Personal computers were the sexy, high-growth market in the early 1980’s with Commodore Computers as one of the bright, early stars in the space. However, an investment in Commodore Computers would have ended poorly. Even though personal computers continued to boom, Commodore found itself left in the dust. Meanwhile, IBM (IBM), an established company with scale, name recognition, and superior resources benefited massively from the PC boom.

I’m not necessarily saying that WDAY is going to be the next Commodore Computers, but it certainly could be as could CRM or N or any of the other high-flying cloud stocks. Meanwhile, Oracle (ORCL) and SAP (SAP) are transitioning to the cloud. ORCL and SAP still have massive advantages in terms of overall market share and name recognition in the ERP market. Just because they’re a little late to the game doesn’t mean they won’t end up the winners.

Cloud computing is still a fairly new industry, and for a while companies have been able to carve out their niches and operate with little competition. That honeymoon is over as the big companies enter the fray and the up-and-comers start to expand into new areas. WDAY acknowledges in their most recent 10-K, “We expect continued consolidation in our industry that could lead to significantly increased competition.” In addition to ORCL and SAP, WDAY looks likely to come into more competition with N in the near future.

As we showed above, WDAY is already priced for massive growth. Even if the company executes flawlessly on its strategic vision and continues to grow rapidly for the next decade, the upside for the stock is limited because expectations are already so high. On the other hand, the downside for WDAY is quite large. This company is burning through cash, diluting its stock by 10% a year, and facing an increasingly competitive environment.

Insiders aren’t jumping ship just yet, but the fact that they’ve sold 220,000 shares (5% of shares held) with no purchases over the past six months suggests that they recognize the risk and are hedging their bets. If you hold WDAY, you should follow their lead and sell.

Investors should avoid the following ETFs and mutual funds as they allocate a significant amount to WDAY and earn our Dangerous or Very Dangerous rating.