We closed this position on January 1, 2013. A copy of the associated Position Update report is here.

Consolidated Edison’s (ED) abnormal pension accounting assumptions may provide a short-term boost to earnings, but they only cover up the $4.8 billion pension and other postretirement benefits deficit. Eastman Kodak (EKDKQ.PK) used the same trick to prop up its 2010 earnings, and now it is bankrupt just as I predicted in my March 2011 article “Dead Company Walking: Sell Eastman Kodak”. I recommended clients short Delta Airlines in early May (“Bail Out of Delta Before the Stock Crashes”) for the same reason I recommend them to short Con Ed now.

Without context, an 8.5% EROPA can mean very little.

That is why we gather and rank data on all pension plans for US-traded companies.

8.5% EROPA is higher than 95% of all other companies with pensions or other retirement benefit plans.

The actual ROPA last year was 0.65%, over last 2 years 6.3%, over the last 5 years 5.0%. The average ROPA since Con Ed started reporting the info in 1998 is 5.2%. These calculations are based on dividing the “Actual (loss) gain on plan assets” by the average of the beginning and ending “Fair value of plan assets” for each period. I get that data from the company’s annual reports as detailed in the model used to calculate the actual return on plan assets.

Putting this in dollar terms, the 8.5% EROPA allows ED to report $822 million in income from its return on plan assets when the actual return was just $57 million in 2011. The $822 in “assumed” income is also much larger than the cash contributions ($626 million) the company is making to the pension and benefit plans.

The takeaway – aggressive accounting enables ED to cover up its growing pension issues.

Since ED’s pensions are so large, its pension costs play a prominent role in earnings, much more so than most companies.

Assuming such a high EROPA lowers the cost of what ED has to report for its pensions, which lowers the company’s overall expenses and increases accounting earnings.

Those are big numbers and may explain why ED is using such a high assumption for its EROPA. It appears the company’s earning would be much lower if they used a more realistic assumption.

Pensions Are Already Underfunded by $4.2 billion

If ED were in a high growth industry with excellent prospects for future profits, one could argue that the company could eventually earn its way out of the underfunded pensions hole. That is a tough argument for a company in such a low-growth and low-return on invested capital (ROIC) business.

Worse yet, despite reporting profitable GAAP accounting profits, my model suggests that ED is an unprofitable business even if one assumes its EROPA is fair and accurate. Figure 1 compares ED’s economic earnings to its accounting earnings. In 2011, ED reported $1,051 million in accounting profit while I believe the company’s true cash flows were closer to -$150 million.

Figure 1: Accounting Profits Are a Mirage 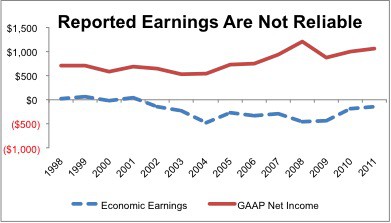 From where I sit, the company is in an intractable situation. It is not making any money and its liabilities are formidable: pensions at $4.2 billion plus total debt of $10.9 billion equals $15.1 billion.

Further, I expect ED’s pensions are likely to become more underfunded and its liabilities are likely to grow as time progresses unless the company successfully negotiates major reductions in benefits for its employees. Last year, despite a significant increase in EPS compared to the prior year, the underfunded status of ED’s pensions grew from $3.3 billion at the end of 2010 to $4.2 billion at the end of 2011. Making matters worse, the unusually high EROPA could exacerbate the underfunded pensions problem as it reflects potentially unrealistic expectations about the company’s ability to fund its pensions through stock market gains rather than company and employee contributions.

Even in the unlikely event that ED’s liabilities do not increase, equity investors should be intimidated by the $15.1 billion in existing liabilities that have a senior claim on Con Ed’s future profits. If ED does generate future profits, those profits have to be large enough to cover the $15.1 billion in senior claims plus the expectations baked into the current stock price before equity investors can make significant money in ED.

For those that say all of this information is already baked into the stock price, I suggest you look again. According to my discounted cash flow model, to justify the stock valuation at $~60/share, the company has to grow its after-tax cash flow (NOPAT) by 4% compounded annually for 10 years. That is not as large a hurdle as what I usually point out for stocks to short. However, we are talking about a utility stock whose profit growth is regulated and fairly closely aligned with GDP growth, which is expected to be in the low 2% range.

I would say the odds are low that ED can meet the current expectations baked into the stock price and the odds are high that the company’s future profits will be much lower that what the market expects.

After adjusting for the impact of lower earnings based on higher future pension costs, I see the fair value of the stock at closer to $50 or about 15% lower than its current level.

In summary, using the footnotes to lift the accounting veil on ED’s financial situation reveals some earnings and liabilities issues for a stock that is already expensive and could suffer downward pressure when investors become more aware of them.

Here is a list of the ETFs and mutual funds that allocate the most to ED and get my Dangerous-or-worse rating. Get free ratings on these funds from my free mutual fund and ETF screener.

Disclosure: I receive no compensation to write about any specific stock or theme.