We closed this position on February 29, 2016. A copy of the associated Position Update report is here.

Citigroup (C ) is not as profitable as it leads investors to believe. After analyzing the financial footnotes of 50,000+ annual reports, we know more about which companies have the naughtiest and the nicest accounting. And Citigroup is definitely on the naughty list.

Citi’s reported earnings overstated its true economic earnings by $51.8 billion (60% of revenues) in 2010. Overstated earnings have also led to an over-priced stock and landed C on our most dangerous stocks list for May.

Investors should sell C, as well as any ETFs and mutual funds that hold it, before the overstated earnings bubble pops. I think Citi is running out of accounting tricks and will have an increasingly difficult time propping up its earnings.

Figure 1 plots the steady rise in the difference between reported GAAP earnings and the company’s economic earnings from 1998 to 2010 on an aggregate basis as well as a percentage of revenues. In 2010, the level of overstatement reached an all time high. 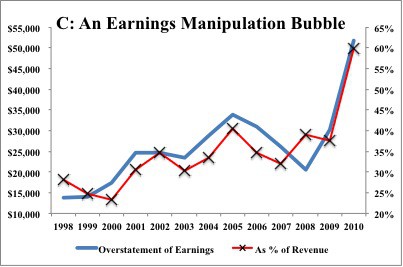 The rather large divergence between reported and economic earnings is made possible by accounting rule manipulations, which we explain below. Note that we are not saying that Citi is breaking any formal laws or rules. It is simply playing the same earnings management game that Wall Street has been playing for years. The difference now is that game is ending as Citi runs out of tricks to prop up its earnings.

Late last August, we wrote about the abnormally-large deferred tax asset (over $50 billion) on Citi’s 2009 books that artificially boosted reported earnings and capital. Though Citi tried to sweep the issue under the rug, CLSA analyst Mike Mayo and I pointed out that Citi was seriously stretching accounting rules by carrying such a large deferred tax asset. To justify the $50 billion asset, Citi would have to generate over $4 billion in taxable income every year for the next twenty years, which seems a little aggressive given the company’s five-year aver­age pre-tax income was a loss of $16 bil­lion per year. Somehow, Citi convinced its auditors it would achieve and sustain a rather epic turnaround in profits.

In 2010, it upped the ante and increased its deferred tax assets (“DTAs”) by another $5.3 billion, or 10%, to over $56.4 billion, more than one-third of the company’s book value. Given the importance of book values to capital requirements and borrowing costs, Citi has a lot to lose if they had to write-down the DTAs.

$5.0 billion of the increase in the deferred tax asset comes from reconsolidating previously-off-balance-sheet assets due to an accounting rule change (FAS 166/167). About half of the $5 billion comes from the increase in Citi’s “tax credit and net operating loss carry-forwards” to $23.3 billion from $20.8 billion in 2010 over 2009. That increase comes despite Citi’s recording a rather substantial pre-tax profit of $13.2 billion. Typically, a company’s tax credit and net operating loss carry-forwards are reduced when it generates a profit because the cumulative value of its losses is reduced by the most recent year’s profit. If you don’t believe me, you can see for yourself on page 180 of Citi’s 2010 10-K.

We think it is pretty clear that Citi has taken license to do just about whatever it takes to boost capital levels, please regulators and keep their stock price propped up. In this matter, having the US Treasury as one of your major shareholders probably does not hurt.

But wait, there is more that we find buried in the footnotes. This time, we reveal that Citi’s understates its provision for loan losses and boosts reported earnings by about $5.7 billion, 7% of revenue.

One could argue that these accounting shenanigans were not as big a deal if Citi’s stock was cheap, but that is not the case.

With no future profit growth, the value of Citi’s stock is closer to $5.65 per share.

C gets our “very dangerous” rating because we believe the downside risk dwarfs the upside potential of the stock. We recommend selling or shorting Citigroup’s stock as well as the following financial sector ETFs because they allocate a significant portion of their assets to Citigroup:

For more information on our coverage of ETFs, click here.

Note: Stock pick of the week is updated every Tuesday.

2 replies to "Sell Citigroup Before The Earnings Bubble Pops"