We closed this position on February 28, 2012. A copy of the associated Position Update report is here.

When Morgan Stanley (MS) started in 1935, there were around fifteen employees. For 2010, the company reported 62,542 employees. This company’s revenue growth and market capitalization have skyrocketed over the past quarter-century as it and its peers, Goldman Sachs (GS), Citigroup (C ), Merrill Lynch (now Bank of America (BAC)) and JP Morgan (JPM), starting going public in the mid 1980s. Along the way, repeal of the 1932 Glass-Steagal Act on November 12, 1999 allowed for unprecedented concentration of financial resources within the financial sector- btw the movie Inside Job tells this story very well. Not surprisingly, the market capitalization of the financial sector soared in aggregate and as a percentage of the S&P500 before peaking in 2007 at over 22%, nearly 3 times its level in 1990.

We all know what happened after 2007, and the purpose of this article is to help investors avoid a similar potential investment landmine in the making: Morgan Stanley.

Morgan Stanley’s 1998 annual report was about 100 pages. Its 2010 annual report was closer to 270 pages. Figure 1 shows that as the length of Morgan Stanley’s annual reports grew, so did the amount by which their accounting earnings overstated their economic earnings. Figure 1 plots the steady rise in the difference between reported GAAP earnings and the company’s economic earnings from 1998 to 2010 on an aggregate basis as well as a percentage of revenues. In 2010, the level of overstatement reached an all time high of $8.3 billion and 26% of revenues. 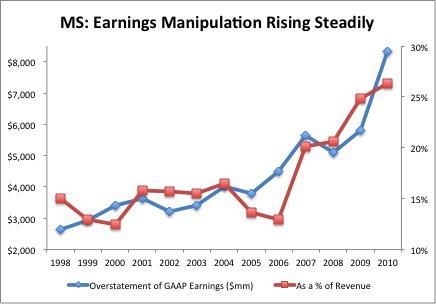 There are many ways that companies can manipulate accounting rules to overstate their earnings, but there is only one place to find out how they do it: the financial footnotes. For example, nowhere on Morgan Stanley’s income statement do you see that they included $821 million in unusual and non-recurring income in their operating earnings. Nowhere on their balance sheet do you see that the company carries over $5.4 billion in off-balance sheet debt. For more details on how we determine Morgan Stanley’s true earnings, click here for free copy of our report on MS.

Anyone who thinks that the post-subprime financial regulatory reform has reformed Wall Street is sadly mistaken. Instead, companies are just better at hiding their financial faults as evidenced by the increase in the length and complexity of annual reports.

Another reason that big business may not be good for investors is that big often results in undue concentrations of power. And in the financial sector where over a million dollars is spent on lobbying each congressman every year, big business means big coffers for buying influence in Washington and with regulators. In their excel­lent arti­cle, “How To Repair a Bro­ken Finan­cial World”, Michael Lewis and David Ein­horn point out that “many senior SEC offi­cials take jobs with the firms they reg­u­late to make money by help­ing those firms avoid the rules.” And when Wall Street does not buy the regulators, they take senior positions in the White House. To name a few, former Goldman Sachs senior executives Robert Rubin and Henry Paulson served as the 70th and 74th Secretaries of the Treasury.

The point is that investors should not trust what they see in reported earnings and press releases. There is simply no substitute, no short cut for doing the necessary diligence to understand the true profitability of businesses. Enron, Tyco, WorldCom, Countrywide have taught us, time and again, that reported financial statements in their current form are simply not reliable.

We raise a big red flag when questionable earnings are combined with an expensive valuation. And here, Morgan Stanley’s stock fits the bill.

To justify its current stock price of about $26, the company must grow its revenues 10% compounded annually for over 15 years. Note the average growth rate over the last 5 years is -2.2%.

Given the rather meteoric rise in the financial sector over the past decade, which was driven, at least in part, by changing 80-year-old laws such as the Glass Steagal Act, I find it rather unlikely and even more unhealthy for any of the major banks to grow at a 10% clip compounded annually for the next 15 years. On the other hand, I think it is more likely that these firms coast along with little to no growth and are simply allowed to maintain, not grow, their unrivaled concentration of wealth and influence. Candidly, I believe it is in our country’s best interests that financial giants like Morgan Stanley are stripped of their rights to gamble with shareholders’ funds and are cut back down to pre Glass-Steagal size.

With no future profit growth, the value of MS’ stock is closer to $9 per share.

MS gets our “dangerous” rating because we believe the downside risk dwarfs the upside potential of the stock.

Note: Stock pick of the week is updated every Tuesday.