Many investors in professional services firm Towers Watson (TW) have viewed the recent merger with reinsurer Willis Group (WSH) as a raw deal for TW shareholders. The crux of their argument comes down to the fact that the value of the deal, based on share prices before the deal was announced, was a ~12% discount to where TW had been trading.

To analyze this acquisition, we’ve created a synergy impact analysis visualizing this deal from both perspectives, either as Willis Group buying Towers Watson, or Towers Watson buying Willis Group. This analysis is possible since this an all-stock “merger of equals”.

What we find is that, if we visualize the deal from the perspective of Towers Watson buying Willis Group, they’re paying a premium of $1.86/share or $321 million above market price. This scenario assumes estimated cost savings of $100-$120 million and potential tax savings from moving the headquarters to London of up to $80 million. We still see the synergies come up short, though not by that much.

However, if we look at the deal the other way, as Willis Group buying Towers Watson, it becomes clear that Willis Group is getting, by far, the better end of the deal here. The purchase price implies negative synergies of $887 million, which seems bizarre because, as mentioned, Tower Watson’s cash flows should easily improve after the merger due to the improved tax treatment, if nothing else.

The discount that Willis Group is getting on Towers Watson shares in this merger is bad enough, but what also has investors frustrated is the fact that Towers Watson has been a much stronger business over the past few years. It doesn’t make sense to many investors that Towers Watson would willingly give up so much value just to merge with what appears to be a weaker company.

Figures 1 and 2 show the relative trends in after-tax profit (NOPAT) and return on invested capital (ROIC) for the two companies since 2010, when the merger of Towers, Perrin, Forster & Crosby with Watson Wyatt created Towers Watson in its present form. 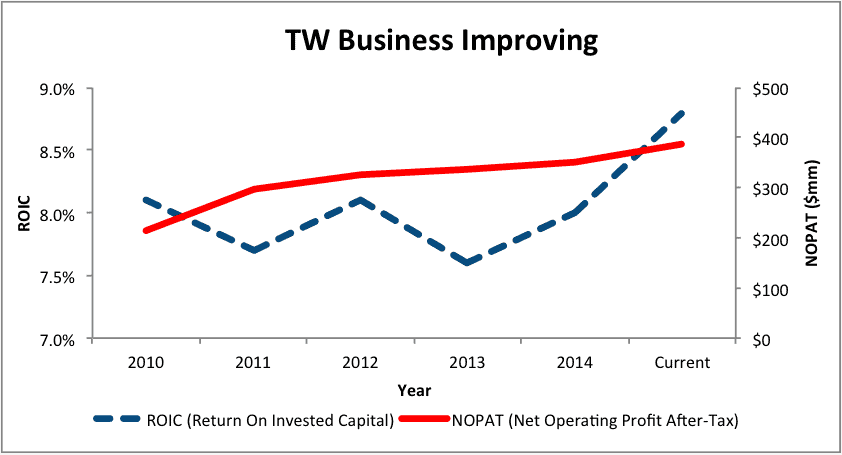 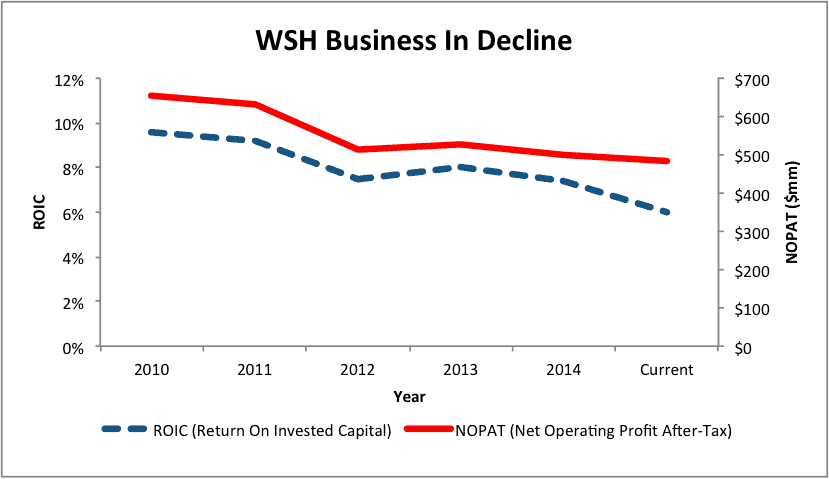 These trends by and large look primed to continue. The human resources consulting and risk management sector is expected to record consistent growth over the next several years, while Willis Group’s property & casualty business could face some significant pricing pressure. Among the positives for Towers Watson:

Among the negatives for Willis Group:

Given the relative trajectories of their businesses, it seems like Towers Watson should be the one getting Willis Group at a discount, and not the other way around.

The final frustration for Towers Watson’s investors is that they’ll be getting a 49.9% stake in the combined company once the merger is complete. They’ll also be getting a $4.87/share special dividend. While Towers Watson is being treated as more valuable than Willis Group, it’s only by ~$300 million.

Figure 3 shows the trends in economic book value for each company. We can see that, as of right now, Towers Watson has an EBV that is ~$300 million higher than Willis Group. However, we also see that economic book value is moving in the opposite direction for both companies. 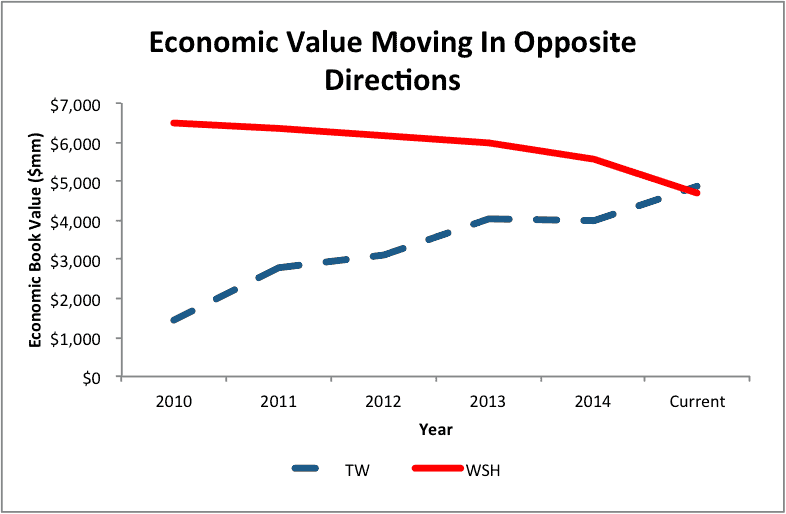 Towers Watson Shareholders Are Losing Out

This is supposedly a “merger of equals”, yet as we see above, these two businesses are hardly equal at all. In addition, over the past five years Towers Watson has a NOPAT CAGR of 12.5% compared to -6% for Willis Group. Given their current trajectories and future outlook, it doesn’t seem to make much sense for Towers Watson shareholders to be getting a smaller stake in the combined company.

1 Response to "Towers Watson Shareholders Are Getting A Raw Deal"