We closed this position on August 4, 2015. A copy of the associated Position Update report is here.

Check out this week’s Danger Zone Interview with Chuck Jaffe of Money Life and MarketWatch.com.

Stanley Black & Decker, Inc. (SWK) is in the Danger Zone this week. It is also on April’s Most Dangerous Stocks list. Last week I warned investors to watch out for stocks that are bid up due to optimism surrounding their particular sector. This week I present another, even more extreme example of sector hype causing a dangerous overvaluation of a company with shaky financials.

SWK has been on quite the run over the past eight months. Its share price is up nearly 34% percent since July 16, 2012 on the back of a rebound in the housing market. Trading at ~$79.20, the valuation of SWK has gotten ahead of reasonable expectations for future cash flow.

The growth in the residential housing market will do wonders for some companies, but the benefits to SWK will be much more measured. During the housing boom, builders bought up a great deal of SWK product. The amount they bought is enough to keep pace with a much higher rate of construction than can be expected anytime in the near future. The number of new privately owned housing units started in 2012 (780 thousand) was less than 38% of the number of units began in 2005 during the peak of the boom[1].

Because SWK’s tools do not become obsolete quickly, the excess inventory of those tools bought to support bubble-level housing activity remain in good working order. As a result, I have a hard time believing that demand for SWK product will be high enough to justify the growth expectations in its valuation.

SWK will likely derive some benefit from the growth in the housing market, but not as much as the market is predicting. The current stock price implies 6.5% growth in after tax profit (NOPAT) compounded annually over the next 35 years, an awfully high expectation for any business and more so for one tied to construction. If we assume 2.5% compounded annual growth—a much more reasonable expectation for construction growth—over 35 years, the stock is worth only ~$45. 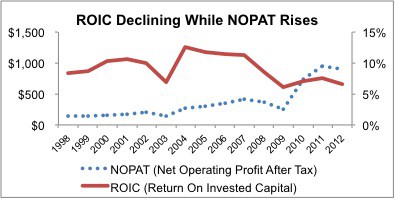 Over the past few years, SWK has demonstrated little ability to grow NOPAT organically. Instead, the company has relied on big acquisitions to fuel growth. This strategy is unsustainable because the company cannot indefinitely pump more capital into the business while getting back proportionally less cash flow (NOPAT). That strategy leads to declining ROICs, which is what the company is doing now. Figure 1 contrasts SWK’s rising NOPAT with its declining return on invested capital (ROIC). Investors should focus on the bottom line, which is ROIC, not the top line revenues or earnings because those metrics ignore the amount of invested capital used to generate them.

In addition to my concern about the unrealistic growth expectations embedded in SWK’s market price, there are other red flags. A close examination of the company’s 2012 Form 10-K reveals three significant hidden liabilities:

1)     Off balance sheet debt: SWK has $350 million in off-balance sheet debt due to future operating lease payments. This amount does not show up on the balance sheet as debt, but it is an unavoidable future cost that affects the company’s finances in the same way as regular debt.

2)     Underfunded pensions: SWK’s defined postretirement benefit plans are currently underfunded by $850 million. Underfunded pensions are nothing new—only a handful of companies in the entire S&P 500 have fully funded pension plans—but they can seriously hurt a company. SWK’s current underfunding is equivalent to 6.6% of its total net assets. This is not enough to torpedo the company, but if their plan assets don’t appreciate at the expected rate the company could end up sacrificing future profits in order to pay off their pension obligations.

Combined, these three issues represent liabilities of $1.4 billion, 11% of SWK’s market cap or nearly $9 per share. These liabilities are a drag on SWK’s already limited growth potential, making achievement of the high expectations implied in its valuation more difficult.

These two handicaps—high expectations and hidden liabilities—outweigh the over-hyped benefits of the growth potential in commercial and residential construction to SWK.

Investors should also avoid Tocqueville Select Fund (TSELX) due to its 3.7% allocation to SWK and Dangerous rating.

[1] Figures from US Census: http://www.census.gov/construction/nrc/pdf/startsan.pdf