Groupon (GRPN: $6/share) went public in late 2011 with hopes of revolutionizing the way consumers interacted with merchants. GRPN shares have since fallen over 75%, and we believe they will fall further. A bad business model, lack of profit growth, and extreme competition put Groupon in the Danger Zone this week.

When Groupon went public, it was generating nearly all of its revenues through local coupons and deals. The company acted as a middleman by allowing merchants to offer special deals to its user base, achieving gross margins upwards of 80% in the process. However, this business model had very little, if any, barriers to entry. As more competitors arose, merchants gained more options, leaving Groupon as little more than an undifferentiated online middleman.

“In order to attract merchants … we have been willing to accept lower deal margins across all three of our segments and we expect that trend to continue.” 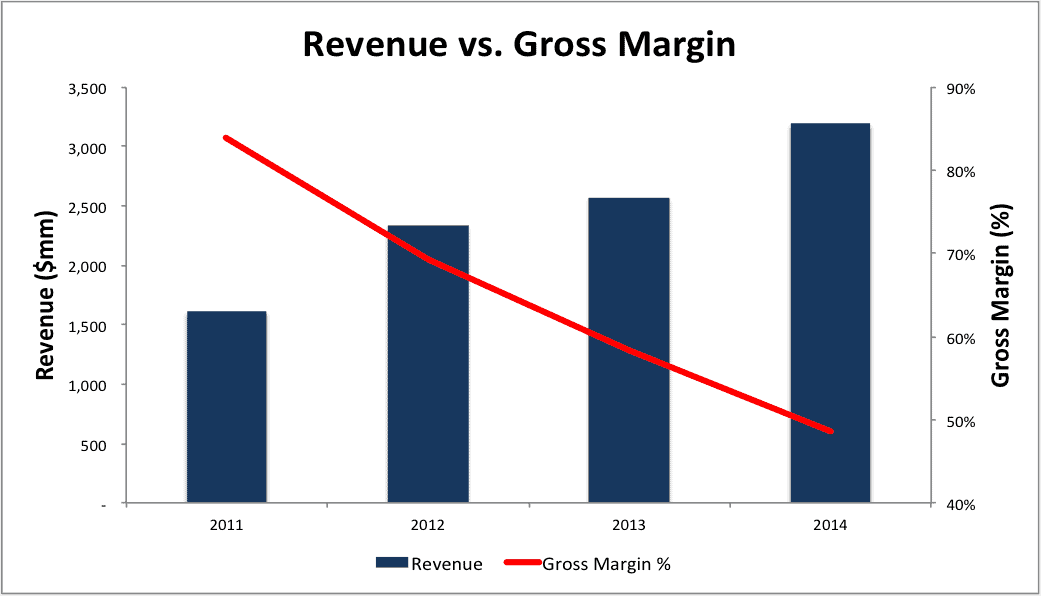 In an effort to spur revenue growth, Groupon started transitioning away from its Third Party coupon sales business and more toward its Direct business. Through the Direct segment, Groupon acts as a merchant and sells products in a similar fashion to Amazon, Walmart, or any other online retailer that sells directly to consumers. Last we checked, Amazon’s retail business is not exactly high margin. The declining trend in Groupon’s margins looks to continue for a while. See Figure 1.

Prior to entering the traditional retail business, Groupon was only able to achieve pre-tax (NOPBT) margins around 3%. In 2014 when gross margins further declined, NOPBT margins followed suit to -0.3%.

In essence, Groupon has shifted from a high gross margin business in which it was no longer making a profit to a lower gross margin business where only a few, large-scale companies make any meaningful profit. As Groupon transitions into a traditional retailer, expect margins to continue declining, as the costs of maintaining inventory, fulfilling customer orders, and handling returns and defects becomes even more costly.

While Groupon’s shift to retail goods has been able to maintain revenue growth, the same cannot be said for profits. Groupon has grown revenues by 17% compounded annually since 2012, but only by 3% over the prior year in 1Q15. Meanwhile, as could be expected with declining margins, profits have headed the opposite direction. The positive after-tax profit (NOPAT) of $42 million that Groupon experienced in 2012 declined to -$6 million in 2014.

Figure 2: Profits Moving Opposite of Revenue

Users are Everything and Groupon Has Few

Much like we saw last week in our analysis of Twitter, Groupon’s business model relies heavily on its user base. Groupon’s only differentiating value-add to merchants is access to its user base. However, with only 48 million active users, this value is miniscule compared to that of other players such as Facebook, Twitter, or even LinkedIn. Also, Groupon isn’t the only outlet for coupons, as daily deal services can be found all over the Internet. Amazon Local provides the same services, retailmenot.com provides coupons, and livingsocial competes directly with Groupon by providing coupons on products, services, and travel. This group of competitors doesn’t even include retailers themselves offering coupons to customers. Without a large user base, Groupon has no competitive advantage with which to grow its business.

Is Management Focused on Fixing the Business?

To drive future expansion of the business, Groupon acquired LivingSocial Korea in January 2014. With this acquisition came Ticket Monster, a South Korean ecommerce website that sells discounted goods, services, and travel offers. However, in March 2015 the company approved a transaction to deconsolidate Ticket Monster and sell a controlling stake in the business. While Groupon did make a profit on the deal, we question whether the company has sustainable competency in operating like a private equity or hedge fund. Furthermore, this acquisition and subsequent sale did little to improve Groupon’s business model, thereby alleviating none of the prior concerns.

Much of the bull case for Groupon rests on its ability to continue growing gross billings and revenue. However, as we’ve seen, revenue hardly grew in 1Q15 and management isn’t expecting much growth going forward. In addition, growing revenue is not enough to warrant an investment in this company. We’ve seen Amazon, widely believed to be the company who revolutionized online retail, operate for years on the slimmest of margins, and still fail to create profits at times. Betting on Groupon to figure it out is betting on a company with a struggling business model to execute better than one of the largest online retailers in ecommerce.

Groupon currently has a market cap of $4.1 billion and little debt, so it could very well be a buyout target. However, any company looking to acquire Groupon would either be doing so for its technology or its user base. Its technology isn’t anything that couldn’t be replicated by any number of competitors and already has been replicated by some. Also, its user base is not large enough to warrant buying a business that is failing to produce any profits and only getting costlier to operate. While anything can happen, we don’t see Groupon as an attractive buyout target. With Groupon’s low user base, any acquirer would be paying upwards of $85 per user, assuming it bought Groupon for its current market cap of $4.1 billion.

The company depressed 2013 earnings, by including $95 million non-operating items in operating expenses. These unusual charges came largely from an $85 million loss on impairment of investments.

Without these unusual charges in 2013, the Groupon’s NOPAT was a positive $45 million. NOPAT in 2014 fell to -$6 million, much worse than the narrowing loss Groupon’s net income showed.

Given Groupon’s current strategy, we do not believe in management’s ability to innovate its business model and turnaround the company’s declining profits.

Even at $6/share, Groupon is vastly overvalued. To justify the current price of $6/share, Groupon must increase its pretax (NOPBT) margin from -0.3% to 3% and grow revenue at 20% per year for the next 16 years. Considering that Groupon is trying to become an online retailer, it is incredibly difficult to expect double-digit revenue growth and 3% margins for such an extended period. Amazon currently manages 0.5% NOPBT margins while Zulilly, a new online retailer, only achieves 2% pre-tax margins. At the same time, this scenario would leave Groupon generating $46 billion in revenue, nearly half the revenue Amazon generated in 2014.

If we give Groupon credit for 1% NOPBT margins and 17% NOPAT growth for the next 10 years, the stock is still worth only $2/share today. This value represents a 66% downside from current prices and a 92% downside from its IPO frenzy days.

With declining margins and further expansion into the cutthroat retail industry, Groupon must fully deliver when it reports its next quarter earnings. It is already projecting for revenues to be flat in 2Q15 and anything below expectations will be stronger evidence that this business model is not producing the results Groupon claims it can.

Prior to its IPO, insiders in Groupon sold a total of $870 million worth of shares. The large amount of insider sales is especially odd since share prices usually appreciate when a quality company goes public. Again, in the third quarter of 2013, insiders sold a net of 299 million shares as the stock fell 27% in a two-month span. Even now, in the past 12 months insiders have bought 681 thousand shares and sold 20 million, for a net of 19 million shares sold. These most recent sales represent ~3% of shares outstanding as of March 31, 2015. If insiders continually sell their own shares, why shouldn’t you do the same?

The following ETFs and mutual funds allocate significantly to GRPN and earn our Dangerous or Very Dangerous ratings.

2 replies to "No Deal to Be Had With Groupon Shares"