Check out this week’s Danger Zone interview with Chuck Jaffe of Money Life and MarketWatch.com below.

Men’s Wearhouse is the story of a clothing retailer looking for growth and pressured by an activist to undertake an expensive and value-destroying acquisition. Shares are down 10% since the acquisition closed last June, and the stock has the potential to fall much further.

Men’s Wearhouse has a history of growth and smart acquisitions. The company’s acquisition of After Hours Formalwear, a tuxedo rental businesses, in 2006 has allowed Men’s Wearhouse to remain relevant to consumers in an era of declining brick and mortal retail sales. The company’s net-operating profit after tax (NOPAT) grew by 16% compounded annually from 2009 to 2013.

However, recent years have not been kind to Men’s Wearhouse. NOPAT declined 10% from 2013 to 2014 due to a fall in revenue and slight rise in expenses. To presumably nip this problem in the bud, Men’s Wearhouse acquired competitor Joseph A. Bank in June 2014 for $1.8 billion after a heated bidding war. This acquisition almost doubled the size of Men’s Wearhouse and raised its invested capital from $1.9 billion to $3.7 billion.

What Kind of Results Has the Acquisition Produced?

How has this acquisition performed for Men’s Wearhouse thus far?

NOPAT on a trailing 12-month (TTM) basis is down 22%. This decline on a TTM basis is due to a dramatic increase in expenses. In the company’s latest quarterly report, sales increased 37% year over year, while cost of retail goods sold increased 47%, occupancy costs increased 56%, and advertising expense increased a whopping 86%. The company’s return on invested capital (ROIC) is down to 4% on a TTM basis, compared to 8% just a year ago.

Figure 1: Men’s Wearhouse’s Best Days Are Behind It

What’s Behind the Decline?

JoS. A. Bank was not exactly a thriving business either. In its last conference call, Men’s Wearhouse CFO Jon Kimmins revealed that JoS. A. Bank same store sales fell by 8%, and that he anticipates sales to continue falling by “high single digit to low double-digit” levels, blaming efforts to cut discounts and improve margins for the decline.

Hedge fund Eminence Capital LLC, the largest shareholder of Men’s Wearhouse with a 10% stake, put pressure on Men’s Wearhouse to engage in merger talks with Jos. A. Bank in late 2013. With an additional 5% stake in JoS. A. Bank, Eminence Capital had a clear incentive to see this deal go through regardless of the economics of the acquisition. We’ve seen this type of activist-driven behavior recently with Staples and Office Depot.

After the acquisition closed, Eminence Capital stated that it was “happy to see these two great companies coming together.” Of course they were happy: Between the time news of the bidding war had started in early October and the acquisition closure in June, MW rose 72%.

Men’s Wearhouse’s 2014 NOPAT of $146 million is actually 76% higher than its GAAP net income of $83 million. This is a direct result of several non-operating expenses we removed from Men’s Wearhouse’s reported earnings, including:

These adjustments total 4% of the company’s revenue on a TTM basis. While these adjustments actually raise Men’s Wearhouse’s operating earnings in our view, we want to be as objective as possible in our analysis of this company.

While Men’s Wearhouse reports $1.7 billion in debt, the company also carries $698 million in off-balance sheet debt from operating leases (29% debt and 29% of market cap). This brings the company’s total debt to $2.4 billion (or 99% of MW’s market value!).

No Moat, No Diversification

Men’s Wearhouse competes with private businesses with its tuxedo rental service, and department stores like Macy’s (M) and JC Penney (JCP) in the suit business. While JCPenny has been losing money for two years, Macy’s boasts respectable NOPAT margins of 7% and an ROIC of 7% compared to Men’s Wearhouse’s 4% margins and 4% ROIC. Macy’s diversified sales offerings also give it inherently less risk than a suits-only retailer like Men’s Wearhouse.

Brick and mortar retail is a tough place to be these days, and we’d rather place our bets on one of Men’s Wearhouse’s larger and more diversified competitors like Macy’s.

Figure 2 below, which shows the correlation between MW’s share price and EBV per share, says it all:

Figure 2: Stock Price Has Gotten Way Ahead of Itself 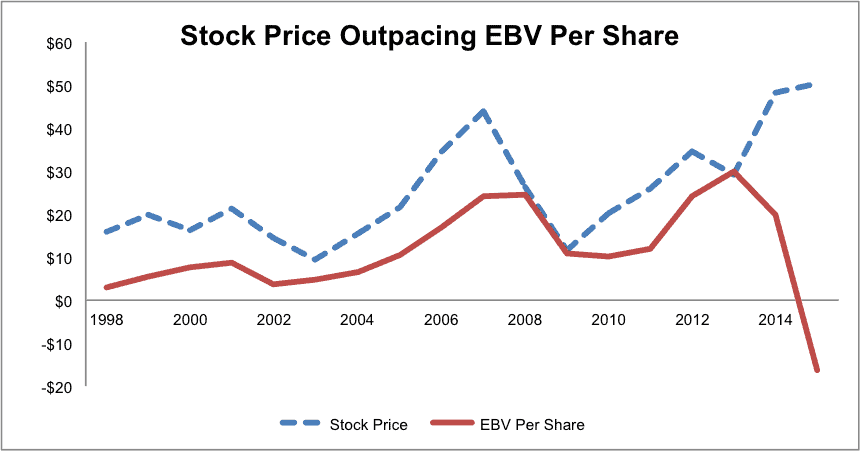 For a cash flow-weak retail business in decline, it’s certainly strange that the market has placed such a high premium on this stock. To justify its current valuation of $51/share, Men’s Wearhouse would need to grow NOPAT by 10% compounded annually for the next 20 years.

We think 10% annual growth for the next two decades is optimistic for a mature brick-and-mortar retailer. If Men’s Wearhouse can raise its after-tax margins to 6% and grow profits by a still-optimistic 7% compounded annually for the next 20 years, the stock is worth $23/share — a 55% downside from current levels.

Don’t Count on the Dividend

Men’s Wearhouse currently offers a $0.18/share dividend. Given the company’s weak cash flows, lack of excess cash, and enormous debt, we think this money should be put to use paying down debt. We think a dividend cut is more likely than any raises going forward until the company can take care of its balance sheet or plug the hole in its leaking cash flows.

There are a few catalysts that we think could send the stock into long-term decline. Cost synergies from JoS. A. Bank could fail to materialize or impact Men’s Wearhouse’s bottom line (as they have so far). Men’s Wearhouse could also miss on revenue this quarter, has it has done for the past two quarters since the Jos. A. Bank acquisition has failed to generate expected results. Lastly, Eminence Capital could shed its position in the stock and pocket its big gains. Pick your poison, but all three of these look increasingly likely to come true.

Institutions Know Now is the Time to Get Out

In the past six months, insiders have bought no shares and sold 87,069 shares, equal to 1.5% of insiders’ total holdings. Compared to last quarter, institutions have dumped $14 million shares, or 39% of their total holdings.

Short interest stands at 5.3 million shares, or almost 12% of float.

The following ETFs and mutual funds allocate significantly to MW and earn our Dangerous or Very Dangerous ratings:

Disclosure: David Trainer and André Rouillard receive no compensation to write about any specific stock, sector, or theme.

Correction: A previous version of this report incorrectly showed cost of goods sold had increased 74%. This has been amended to 47%.