Netflix (NFLX: $184/share) announced a price increase that will affect new U.S. members immediately while existing members will see the changes “over the next several months.” We’ve recently seen the impact that price increases can have on Netflix’s membership growth, when the company blamed poor 2Q16 growth on cancelations due to a price increase. Will the latest price increase have the same effect? In the larger context, we believe the price increase signifies that Netflix’s competitive advantage has been wiped away. In order to justify its massive original content budget, it must raise prices if it is to ever meet the expectations implied by its stock price.

The streaming video market has grown dramatically and Netflix has lost much of its early-mover advantage as we detailed in July 2016. Today, the market is highly fragmented with competitors offering live TV bundles, original content, and exclusive access to content from certain movie studios to attract customers. Competitors are also eating away at Netflix’s business model by removing content from the service. Disney recently announced a standalone streaming platform with all Disney content, including Marvel and Star Wars. Fox has been pulling its content from Netflix over the past few months and making it available via Hulu. Meanwhile, Apple has plans to invest billions into original content that it is streaming via its Apple music service.

Worse yet, Netflix’s pending price increase limits its pricing power over the competition, per Figure 1. The competitors in Figure 1 also include live TV offerings, such as Sling TV and DirecTV Now. 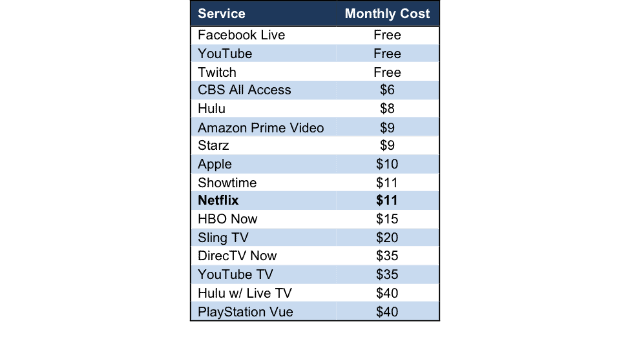 The increase in competition leaves limited pricing power, a lynchpin for the viability of Netflix. Without pricing power, Netflix can’t afford to continue to do all the things that have helped management hype the stock, such as invest in growing original content, attracting new members and maintaining its large content library. As we have written for some time, investors will not tolerate huge cash flow losses forever. Now, with ample competition, it’s clear Netflix’s only value is in its costly original content.

The recent revelations that competitors are willing to pull content from Netflix and start their own service indicate that Netflix’s business model is completing its shift to a traditional TV network, even if not by its own choosing.  Accordingly, all investors, not just the bankers and insiders, should beware especially since the valuation of the stock is yet to recognize the cracks in the Netflix bull thesis.

*Revenue from the trailing twelve months

As Netflix’s content obligations increase, its free cash flow (FCF) only grows more negative. Since 2010, the last year Netflix generated positive FCF (and first year it began increasing its content library), Netflix has burned through a cumulative $6.4 billion in cash, per Figure 3. Netflix’s FCF over the trailing twelve months sits at -$3.1 billion, the largest cash burn reported in Netflix’s history.

Figure 5 shows the striking valuation gap between Netflix and TV networks such as CBS, Viacom, and HBO parent Time Warner. Despite having a similar return on invested capital (ROIC), Netflix is valued with an Enterprise Value/Revenue ratio between 2-4 times higher.

Figure 5: Netflix Is Much More Expensive Than TV Networks

One could argue that NFLX deserves a premium over these other stocks due to its international growth opportunities and popularity among younger viewers. Still, it’s hard to justify the massive premium at 8.4. Furthermore, TWX, CBS, and VIAB actually generate significant free cash flow and have sustainable competitive advantages. They also have a customer base that includes nearly every household with a TV – or 118.4 million homes to which networks can advertise. How does Netflix stand a chance or, much less, deserve a premium valuation?

This article originally published on October 5, 2017.

Disclosure: David Trainer and Kyle Guske II receive no compensation to write about any specific stock, sector, style, or theme.