The bull market received a bit of a scare last week as the S&P 500 fell almost 3%, the biggest single week loss since 2012. The market seems to have recovered this week, but a repeat of the 26% gain in 2013 doesn’t appear to be in the cards.

Last May I wrote that I’m long-term bullish and I don’t believe the stock market is in a bubble. I continue to stand by that thesis. The market has withstood the beginning of the Fed taper without suffering the massive decline that many predicted.

The article I linked to above contains the details of my outlook on the economy as a whole, so I won’t go into too much detail here. Basically, I believe the U.S. economy is undergoing a restructuring where we are becoming radically more productive. Businesses are allocating capital more efficiently; the labor force is retooling its skills for the new economy; and technological innovation continues to push the limits of human productivity. The implications of this advancement can be seen in Figure 1.

Figure 1: A New Paradigm for Capital Allocation and Economic Growth. 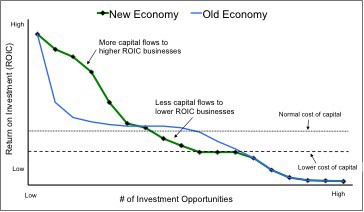 The average return on invested capital (ROIC) of 20% for the S&P 500 (SPY) and the increasing economic earnings of S&P 500 companies supports this thesis. The slow growth in GDP over the past few years is a sign that companies are becoming more deliberate and careful in their capital allocation.

Despite my bullish outlook on the economy as a whole, it’s impossible to ignore the fact that valuations are getting a little stretched. In the past few months, the price to economic book value (zero-growth value) ratio of SPY reached 2.6, which is what we consider to be a Dangerous level. Overall we still rate SPY as Neutral.

The high valuation of the S&P 500 shouldn’t send investors running for the hills, but I do expect that the market will be more turbulent this year as we see corrections in individual stocks and groups of stocks that have gotten especially overvalued.

Even though the market is richly valued, there are still plenty of good stock picks out there. Currently, 282 out of the 2,645 stocks we have under coverage (11%) earn an Attractive-or-better rating. 1,697 (64%) earn a Dangerous-or-worse rating. Figure 2 shows the rating landscape for stocks under our coverage.

Figure 2: Ratings for Stocks We Cover 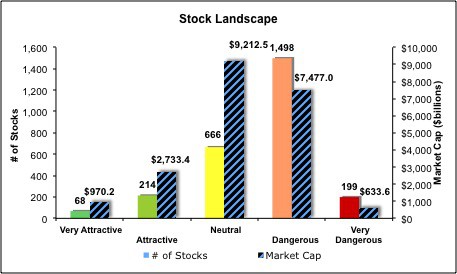 Over the past five years, small caps have handily outperformed large caps. The Russell 2000 (IWM) rose by 153% since 2009 compared to 115% for the S&P 500. However, we believe the disparity in their performances signifies that small caps are now overvalued. The Russell 2000 currently has a price to economic book value ratio of 5.1, nearly double that of the S&P 500. There are still quality small-caps out there, but on average small caps are overvalued compared to large and mid cap stocks.

I expect to see some corrections in the market this year as valuations fall more in line with fundamentals. I don’t think the market is overvalued enough to cause a large-scale crash, so the corrections should be mostly contained to individual stocks. Even as the market struggles in the short-term, money can be made by those capable of identifying undervalued and avoiding overvalued stocks.

AutoZone (AZO) is one of the stocks that earn my Very Attractive rating. AZO has grown after-tax profit (NOPAT) by 8% compounded annually over the past decade. Going with my theme of increasingly intelligent capital allocation, AZO has also increased its ROIC from 20% to 25% over the past five years. At its current valuation of ~$500/share, AZO stands out with a price to economic book value ratio of only 1, which implies that the company will never grow NOPAT from its current level. Given AZO’s strong track record of profitability and growth, I believe the market is significantly undervaluing this company. I expect strong short-term and long-term performance from AZO.

As I said before, I remain long-term bullish on the market as a whole. However, many stocks out there need time to grow into their valuations. We should see many corrections and modest performance from the market as a whole this year, but that does not mean your portfolio can’t achieve significant returns.

While valuations are stretched and investors must operate with a higher level of diligence in today’s markets, I believe stabilization of the housing market supports the underlying health of the economy and consumer balance sheets.

Ever since the financial crisis, the Federal Reserve policy has unequivocally supported the capital markets. They needed to support these markets to offset the decline in the nation’s largest asset: housing. Now, that housing has stabilized and consumers are able to catch financial breath, Fed policy can get back to the business of ensuring capital is allocated intelligently. Keeping interest rates too low for too long undermines the long-term economic growth potential of our economy.

So, we can expect the Fed to continue to taper bond purchases and raise rates back to more normal levels in the foreseeable future. These changes will challenge the stock market and lead to a greater rationalization of stock valuations. Momentum strategies will no longer be effective. Cash will again be king as the market will more narrowly focus on awarding value only to the stocks that can generate cash flows in excess of what their current stock valuation implies.

Sam McBride contributed to this report