Contrary to public opinion, the long-term implications of cloud computing on the storage and computing businesses are very positive. Western Digital (WDC) is highly undervalued at anything below $70/share as this company stands to benefit more from cloud computing than it will suffer.

Cloud computing does the same for the storage and analysis of data as the power grid did for electricity.

First, the speed and cheapness of getting data storage and computing capacity from the major cloud providers makes building one’s own impractical. Armed with a credit card and a few minutes, businesses can add unheard of levels of data storage and computing capacity. That beats the pants off the time and resources required to procure, build out and manage one’s own data center.

The biggest myth about cloud providers is the lack of security compared to managing one’s own data. That’s like saying that Wal-Mart (WMT) has worse security in its stores than most have in their homes. In reality, the cloud providers have the best, most cutting edge security because the scale of their operations allows them to (1) afford the best security, (2) gain more experience and expertise with security issues and (3) make security a major priority because it is core to their business.

In other words, cloud providers can offer businesses more security than they can afford on their own. 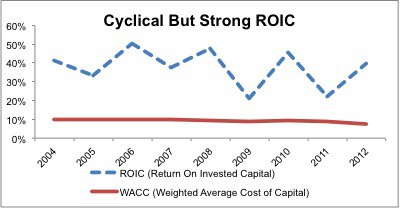 So, what does this mean for Western Digital’s business? It means that cloud services will unlock currently unforeseen demand for data storage and computing. By making the storage so cheap and the computing speeds so fast while also providing best-in-market security, cloud services open a brave new world in data and analytics.

Currently, most businesses have more data than they know what to do with. Most businesses are only scratching the surface of the analytical potential of all the data that enterprise software solutions like SAP AG (SAP) provide. The more businesses learn how to use their data, the more analytics they will apply, the results of which produce more data, which, in turn, will be analyzed. And the cycle continues.

That means the demand for storage and computing capacity will grow, not decline, in the future. And WDC is well-positioned to benefit from that growth. With a top-quintile return on invested capital (ROIC) in 2012 at 40%, WDC is one of the most profitable businesses in its industry. Only Seagate (STX) at 44.5% and Synaptics (SYNA) at 42% have higher ROICs. A high ROIC means that WDC is positioned to turn growth into profits at a high rate. It also means the business is managed intelligently, has an impressive ability to innovate and a focus on shareholder value creation. From an operational perspective, it is hard to ask for much more.

The valuation of WDC is also compelling.

Concentration of the customer base is going to hurt WDC’s margins, no doubt, as large-scale buyers demand lower prices than smaller scale buyers such as consumers or small businesses.

Consequently, I do not expect WDC’s ROIC to remain at 40%, but neither does stock price. Indeed, WDC’s current valuation (~$34/ share) implies its ROIC will drop from 40% to 12% and never rise from that level. In terms of after-tax cash flows (NOPAT), the current stock price implies they will permanently decline by 70%. Essentially, the market price suggests that WDC will just about go out of business.

Market expectations are unduly pessimistic. The stock is too cheap.

Figure 2 plots a comparison of the WDC stock to its economic book value (EBV), which is currently $105/share. The current EBV is the value of the stock if its NOPAT never grows beyond its 2012 level. I’d say that is a rather healthy margin of safety.

Figure 2: WDC Is Trading at a 70% Discount To Its No-Growth Value

My regular readers know that I also cover 400+ ETFs and 7000+ mutual funds, and I like to point out the ETFs and mutual funds that allocate most to the stocks I recommend to buy or sell.

For WDC, there are only two mutual funds (and zero ETFs) that allocate significantly to WDC and get an Attractive or better rating: (1) Aston Funds: ASTON/Cornerstone Large Cap Value Fund (AVIX) and (RVALX) and (2) Oak Associates Funds: Red Oak Technology Select Fund (ROGSX). This finding is a bit unfortunate given the attractiveness of this stock and the Technology Sector’s #2 ranking per my Sector Rankings for ETFs and Mutual Funds report. You can access all of my sector reports here.

Disclosure: I own WDC, STX and SYNA. I receive no compensation to write about any specific stock or theme.