If you followed my advice in June of 2011 to buy Wal-Mart (WMT) because of its attractive valuation and solid fundamentals, you can truly see that diligence pays. Driven by Wal-Mart’s savvy management and intelligent capital allocation, the stock has risen over 45% since my article, outpacing the S&P 500 (up 30%).

But the stock is till cheap and I reiterate my recommendation that investors buy WMT.

Wal-Mart has grown after tax profits (NOPAT) by 11% compounded annually since 1998, which mean the company has  quadrupled its NOPAT over that time period, an impressive feat.

Investors concerned about this company’s growth are looking at the wrong numbers. Cash profits, not GAAP earnings, drive market values, and Wal-Mart is a cash flow growing machine.

More impressive is the company’ ability to sustain an attractive return on invested capital of around 12.4% while also growing that fast. Most business that grow as fast as Wal-Mart see declines in ROIC, at least in the short term, as all the capital allocated for growth requires some time to generate profits. But not Wal-Mart.

The consistency of Wal-Mart’s ROIC is nearly unparalleled. Of the 2,166 companies for which I have data going back at least 10 years, only 11 have a lower variance in ROIC, and none of those 11 have earned positive economic earnings over that timeframe.

Even more impressive is the scale of Wal-Mart’s growth in both revenue and NOPAT. This is not some mom-and-pop operation going from small to not-so-small. Wal-Mart is the biggest retailer in the world going from huge to, for lack of a better term, Wal-Mart huge. To maintain profit margins while incurring all the expense of building and opening new stores is a rare feat. And to do so with such scale is an accomplishment investors should note. 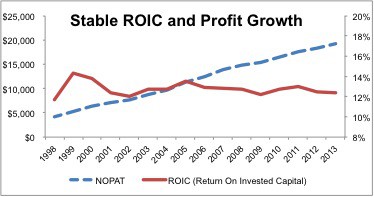 The Stock Is Still Too Cheap

Wal-Mart’s stock has done well since we first opened a position in June 2011, but it is still significantly undervalued. Wal-Mart now has an economic book value of ~$100/share, while its stock price sits at ~$76/share. This yields a price to economic book value ratio of 0.75, which means that the market currently expects Wal-Mart’s profits to permanently decline by 25%. Such low expectations mean WMT offers attractive risk/reward.

As detailed in Danger Zone 5/20/2013: Amazon.com (AMZN), I do not believe that Amazon poses a major threat to WMT. In fact, I think WMT poses a major threat to AMZN. Considering that WMT already has more scale and margins nearly 4x higher than Amazon’s margins, it is fair to say that Wal-Mart has a strong competitive advantage over Amazon as it does over all other firms in the general retail business.

Investors are getting a steal with WMT at $76/share.

Figure 2: WMT Trades At a Big Discount To No-Growth Value

André Rouillard and Sam McBride contributed to this article.