Discussions of artificial intelligence usually bring up one of three scenarios in people’s minds:

Machines will destroy us, serve us, or replace us. Those are the three dominant ways society imagines humanity relating to artificial intelligence.

The Terminator and Jetsons scenarios have been the most widely discussed in fiction and entertainment (hence their names), but it’s the automation scenario that now dominates contemporary thinking around AI. Every day brings another breathless prediction that robots will take all our jobs. One of the most prominent advocates of this position is Tesla (TSLA) CEO Elon Musk, who told the National Governors Association:

“There certainly will be job disruption. Because what’s going to happen is robots will be able to do everything better than us. … I mean all of us.”

When Musk says “robots will be able to do everything better than us,” he makes two key errors. He overestimates robots, and he underestimates humans. AI will not replace humans, and it won’t destroy us or be totally subservient to us either. Instead humans and AI will work together[1], combining each other’s strengths and compensating for each other’s weaknesses to create jobs and achieve results that are presently unimaginable.

The Limitations of AI

As we discussed in “Cutting Through the Smoke and Mirrors of AI on Wall Street” (and elaborated on in the second and third articles of this series), AI has a long way to go before it can compete with human intelligence. Machines may be able to defeat humans in games like Chess and Go, but they can’t compete with humans in areas such as logical intuition, much less creativity and innovation. Machines are savants: incredibly skilled at specific tasks but limited in their overall cognition.

The idea that AI will replace all human workers ignores the complexity and variability of most jobs. Sure, you can train a machine to do x, but most jobs require people to seamlessly juggle tasks x, y, and z, often at the same time and in an open environment that is not immutably structured (i.e. a chess board).

Even if AI does advance to match humanity’s level of general intelligence, it will still need to learn how to apply that intelligence. Smart machines need even smarter teachers, and humans are the best teachers around. 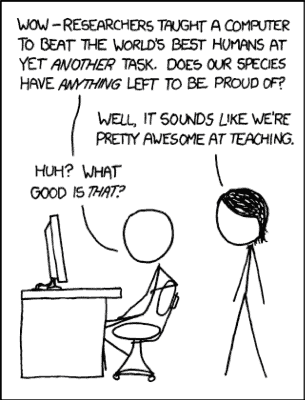 Machines are undoubtedly superior to humans at a large number of confined or routine tasks, but they will never “be able to do everything better than us.”

Machines Can Empower Us & Make Us More Human

No one understands the pain of being surpassed by a machine better than Gary Kasparov. When the reigning world chess champion was defeated by IBM (IBM) supercomputer Deep Blue in 1997, Newsweek described it as “The Brain’s Last Stand.”

Today, Kasparov sees his defeat differently. He believes the advancement of artificial intelligence represents a boon to humanity, even if machines do cause some disruption to the labor market. The more that AI replaces routine jobs, the more it frees up humans to dream up jobs that could never have existed in the past, as he wrote in an essay last year in the Wall Street Journal.

“Machines that replace physical labor have allowed us to focus more on what makes us human: our minds. Intelligent machines will continue that process, taking over the more menial aspects of cognition and elevating our mental lives toward creativity, curiosity, beauty and joy. These are what truly make us human, not any particular activity or skill like swinging a hammer—or even playing chess.”

“AI can seem dystopian because it’s easier to describe existing jobs disappearing than to imagine industries that never existed appearing.”

Humans are wired to fear the unknown. The loss of jobs that already exist to machines frightens us more than the potential jobs those machines will create, even though the new jobs will make use of our talents in ways that are more rewarding and productive.

How We Can Work with Machines

The cycle above—machines taking over human jobs, which then frees those humans to create new jobs—has existed for centuries. Agricultural advancements allowed farmers to move to cities and become artisans and merchants. The Industrial Revolution displaced those artisans and created jobs building railroads and steamships. Throughout history we have made technological advancements that replaced some jobs and created new ones.

What’s different about AI is our relationship to the technology. AI is not a tool where the human is in complete control. AI gets some autonomy. It acts in ways that it’s not explicitly told to and makes recommendations that humans might not anticipate or fully be able to understand. People don’t just need to learn how to use AI, they need to learn how to work cooperatively with it.

Many large financial firms have already shown an understanding that AI is best used as a complement to human labor, not a replacement for it. When BlackRock (BLK) announced last year that it would rely more heavily on algorithms to pick stocks for its funds, much of the news coverage interpreted the move as machines replacing traditional fund managers.

“It’s not going to replace humans. I believe it will be human and machines.”

The numbers bear Kapito’s statement out. Even though the company’s shift to more algorithmic funds led to 36 employees leaving, the firm has actually added nearly 700 employees (5% increase) over the past year. It’s not just tech talent either; BlackRock has placed an emphasis on hiring liberal arts majors. As technology changes the finance industry, employers need to start looking for different skillsets.

Research shows that cooperation between humans and machines thrives when humans leverage our uniquely human skills: intuition, pattern recognition, and reading implicit signals. Relationships thrive when both parties have a clear and early understanding of what to expect from each other.

AI has the potential to make us more human, not less, when developed with these goals:

These steps can help companies reframe AI as way to make humans more productive rather than as a way to replace them. In the words of famed investor Paul Tudor Jones:

This article is the fourth in a five-part series on the role of AI in finance. The first, “Cutting Through the Smoke and Mirrors of AI on Wall Street” highlights the shortcomings of current AI in finance. The second, “Opening the Black Box: Why AI Needs to Be Transparent” focuses on how transparency is crucial to both developers and users of AI. The third, “AI Has a Big (Data) Problem” details the difficulty machines have in reading large amounts of unstructured data. The final article will focus on how AI can lead to significant benefits for both financial firms and their customers.

Click here to read the fifth article in this five part series.

This article originally published on February 6, 2018.