This year’s unusually cold winter has been a source of frustration for drivers, but it has been a boon for car maintenance specialists and auto parts dealers. Cold weather and icy roads means more accidents and more car parts failing. All automotive retailers should benefit, but AutoZone (AZO: $540/share) is the best long-term bet for investors.

AutoZone has been anything but a fair-weather company. Its profits (and its stock price) have been rising consistently for the past fifteen years. The company has grown after-tax profits (NOPAT) every single year since 1998, climbing from $248 million to over $1.2 billion and resulting in an 11% compounded annual growth rate. The company also has grown its NOPAT margins to over 13%, due in part to the success of AZO’s in-house Duralast brand.

Figure 1 compares the 12 auto-parts retailers we cover. AZO ranks at the top in the sector for NOPAT margins and return on invested capital (ROIC) and near the top for free cash flow as a percent of revenue and NOPAT growth. 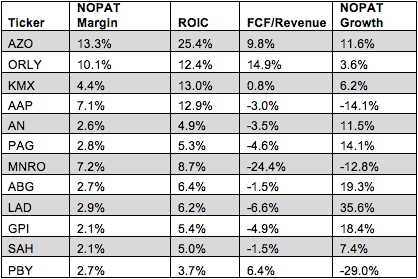 The most impressive number in that table is AZO’s 25.4% ROIC, which is nearly double that of its closest competitor. AZO’s ROIC is much closer to a tech company like Google (34%) than to other auto parts retailers and maintenance shops. This high ROIC is no fluke, however, as AZO’s ROIC has topped 20% in 8 out of the past 10 years.

AZO’s impressive ROIC shows that management has its head in the right place. In its 2013 Form 10-K, AZO disclosed, “We use ROIC to evaluate whether we are effectively using our capital resources and believe it is an important indicator of our overall operating performance.” I have long maintained that ROIC is the most important measure of profitability, and it’s good to see a company recognizing the importance of this key metric.

A few other companies calculate and disclose ROIC in their filings, including Target (TGT), but it’s rare for a company to be as transparent about their calculation as AZO. Page 28 of AZO’s 2013 Form 10-K contains a table in which the company shows exactly how it has calculated ROIC for the past five years.

As you can see, AZO’s calculation is different from mine, and they come up with a 32.7% ROIC for 2013. This difference is primarily due to the fact that AZO does not add back off-balance sheet debt to their invested capital. While I would like to see AZO make the necessary adjustments to get a truer picture of ROIC, their disclosure already surpasses almost every other company out there.

Most importantly, their focus on ROIC is translating into an industry-leading ROIC.

AZO’s focus on ROIC has created significant value for shareholders. In addition to the profit growth of the past 15 years, AZO’s stock has seen impressive returns. AZO is up almost 40% over the past year and 270% over the past five. I mentioned the correlation between ROIC and market value when writing about Apple in May, and it holds true for AZO as well. Management’s ability to maintain a high ROIC has made shareholders a great deal of money.

While one might think from these returns that the stock is now overpriced, it is in fact still very cheap. Figure 2 compares the auto parts retailers on a variety of valuation metrics. AZO has the lowest price to economic book value ratio, market-implied growth appreciation period, and enterprise value/NOPAT. 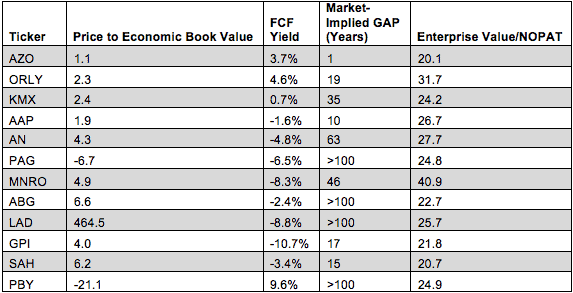 Free cash flow yield is the only valuation metric in which AZO is not in first, and even in that category AZO ranks third out of twelve. AZO’s solid free cash flow—which has been positive every year of the 21st century—should give investors confidence in its ability to handle the burden of its nearly $6 billion debt (~30% of market cap).

At ~$530/share, AZO has a price to economic book value ratio of only 1.1, which implies that the company will only grow NOPAT by 10% for the remainder of its corporate existence. Given that AZO has grown NOPAT by more than 10% a year for the last decade and a half, it should be able to easily surpass the market’s low expectations.

AZO reports second quarter results on February 25, and I would expect to see some strong year over year sales growth due to the unusually cold winter. Given the best-in-class ROIC, I also expect stronger earnings growth (a high ROIC is one of the best leading indicators of upside earnings surprises). If operational results are strong enough, and the company generates greater than expected cash flow, we could also see an expansion of AZO’s buyback program.

More importantly for a long-term investor, AZO is set up better than any other company in its industry to achieve sustained growth. In addition to its superior profitability metrics, AZO has a scale and geographic reach that none of its competitors can match. None of its competitors have an international presence while AZO has over 300 stores in Mexico and has begun expanding into Brazil with three stores. This exposure to developing markets should help AZO continue its impressive growth rate in the future.

At its current valuation, it’s hard to see anything but upside for AZO. Even with a very modest expectation of 6% NOPAT growth compounded annually for 10 years, our discounted cash flow model gives AZO a present value of ~$850/share. It’s hard to see AZO growing much slower than 6% for very long, and a growth rate in the double digits could definitely send AZO stock above $1,000/share.

It’s hard to argue with the conclusion that AZO is the class of its industry. Some smaller companies might boast better short-term growth, but the commitment to creating shareholder value through a high ROIC sets AZO apart.

No ETFs or mutual funds that earn an Attractive-or-better rating allocate significantly to AZO. Investors who want exposure to AZO should buy it directly and not pay unnecessary management fees.

Sam McBride and André Rouillard contributed to this report