Non-GAAP earnings are getting out of hand. In 2014, 19% of all U.S. IPOs used non-GAAP earnings to appear profitable when under GAAP earnings they were not. The Wall Street Journal reports that all companies are using non-GAAP metrics at a higher rate than ever before, and that they continue to get more creative in the type of costs they’re stripping out of these earnings. Commonly excluded costs are pensions, executive compensation, and management recruitment. Each of these costs is a normal part of business operations and should be included when determining profits.

A big part of the boom in the use of these non-GAAP measures goes back to a law passed in 1993 that made bonus payments to executives tax deductible if they were “performance-based”. That law created an incentive for companies to shift more of executive compensation to bonuses rather than base salary. The problem is that executives don’t want to risk not getting paid as much if they underperform.

The result is: companies developed easily manipulated performance metrics so executives bore minimal risk of not hitting their earnings goals and getting bonus payouts. In 2012, 63 companies in the S&P 500 paid out “performance-based” bonuses after underperforming the index, including one where the board simply added on 6 cents to adjusted EPS at the end of the year so executives would get their bonuses.

Most companies are not so blatant about adjusting EPS to ensure big executive payouts, but don’t think it still doesn’t occur. Take Discovery Communications (DISCA), whose CEO David Zaslav made over $150 million last year, mostly from “performance-based” stock awards. 40% of Zaslav’s bonus was tied to the company’s Adjusted Operating Income Before Depreciation and Amortization (OIBDA). 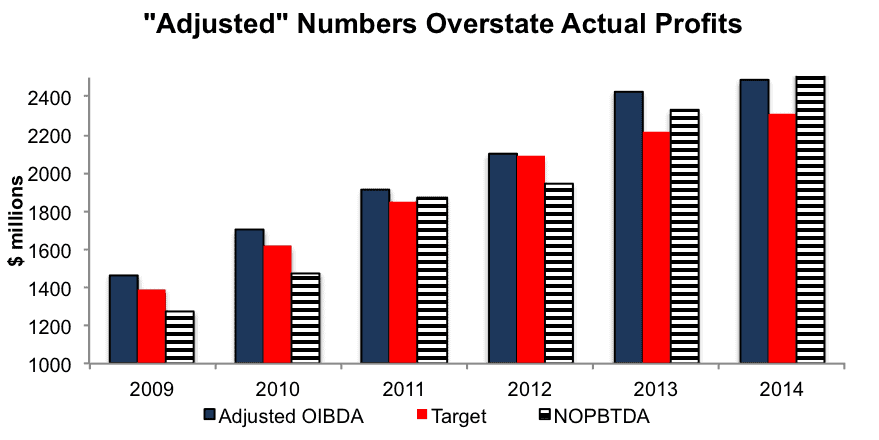 As Figure 1 shows, DISCA just barely managed to hit its adjusted OIBDA target in each of the past six years, including 2012 when it surpassed the target by just $5 million. On the other hand, our own measure of Net Operating Profit Before Taxes, Depreciation, and Amortization (NOPBTDA) shows that DISCA missed its target in three out of the past six years.

The difference between the company’s “adjusted” results and our measure? Well, it turns out adjusted OIBDA excludes stock-based compensation, so the executives get to exclude their bonuses from prior year when calculating their bonuses for this year. It also excludes ambiguous expenses such as “restructuring and other charges” and “certain inter-segment eliminations”, which allows the company to bundle expenses into those line items and get their numbers where they want.

Executives Face No Accountability From Board of Directors

In theory, the Board of Directors should serve as oversight for the executives and make sure their compensation is tied to actual performance. In reality, the board tends to be either tightly tied to executives or even comprised of the executives themselves.

For instance, Jarden Corporation (JAH) uses an adjusted EPS that excludes items such as costs “primarily associated with rationalization of manufacturing and distribution facilities” in order to determine cash bonuses to executives. The three largest recipients of these bonuses in 2014 were Executive Chairman Martin Franklin, President Ian Ashken, and CEO James Lillie. Our Danger Zone report on JAH has more details.

Franklin, Ashken, and Lillie also hold seats on Jarden’s Board of Directors. The group that’s supposed to be protecting the interests of shareholders is instead comprised to a large extent of executives that can vote to give themselves bigger bonuses.

This problem looms large at many public companies, where the Board is either too closely tied with management or simply too apathetic to closely monitor executive compensation. Shareholders could vote down executive compensation plans, but investors rarely pay enough attention to this issue to do anything about it.

The Need For New Metrics

In addition to the issue of comparability and reliability, most current metrics used to calculate bonuses pay no attention to the balance sheet. Even companies that use free cash flow almost always exclude acquisitions, which means executives can buy up competitors at overvalued prices to boost earnings even as they destroy real shareholder value.

All these non-GAAP metrics just make life more confusing for investors, and as we’ve talked about before, GAAP EPS is not much better. Investors need comparable, reliable metrics that hold executives accountable for their use of capital as well as their bottom line profits.

That’s why we go through tens of thousands of filings each year to strip away accounting distortions and produce comparable measures of return on invested capital (ROIC), free cash flow, and economic earnings. These are unbiased metrics that give an accurate picture of executives’ ability to create value for shareholders.

Investors need to start demanding that companies use more accurate measures for executive compensation. Otherwise, incentives will remain in place for executives to spend more time on earnings manipulation and less time on actually making the real business improvements that will benefit shareholders.