Shifting sentiment, as seen through price action in equity and debt markets, signals that investors are losing patience with Netflix’s extraordinary cash flow burn ($13 billion since 2011).

For example, the 4% drop in the stock after the most recent earnings report shows that subscriber growth is no longer enough. Netflix needs to prove it can monetize its original content before competition (with decades of monetization success) takes more market share. Time is running out for Netflix’s current business model to work.

Increasingly skeptical investor sentiment leads us to put Netflix (NFLX: $322/share) back in the Danger Zone.

As we stated on CNBC’s Closing Bell on January 16, 2019, Netflix needs over 500 million subscribers at $20/month to justify $350/share. Without additional price increases, NFLX needs half the global population to sign up for Netflix. See Appendix I for the straight forward math behind this analysis and our reverse DCF model.

We think these expectations are unrealistic, and the evidence backing up this belief continues to grow, as you’ll see below.

Investors are signaling that they will not subsidize Netflix’s huge cash losses forever. They need the company to show it can monetize its content in the face of mounting competition.

Debt investors are not happy either. In fact, they’ve always been more skeptical and assigned Netflix’s debt “Junk” ratings since as early as 2015. In the last year, that skepticism has grown, as the yield on its issuances has increased 150 basis points. Since 2017, the cost of debt has risen 275 basis point to 6.375%. Should debt investors grow more weary of Netflix’s massive cash burn, the liquidity they’ve provided could dry up quickly. See Appendix II for more details.

The main reason investors are losing confidence is that Netflix’s subscriber growth has not generated enough revenue growth to cover the increase in content spending. Since 2011, revenue has increased by $12.6 billion, which is half the total increase in expenditures over the same time, per Figure 2. The difference in revenue and expenditures means Netflix has burned through nearly $13 billion since 2011. For the Netflix business model to work, subscriber revenue growth has to cover the cost of increased expenditures. To date, the model is not working – not even close.

The leverage investors need to see in Netflix’s business model has not been present in the past and has still not emerged. Increasingly, investors are less willing to believe that leverage will ever emerge, per Figure 1 above.

* 2018 FCF estimated based on financial data in NFLX’s earnings press release. Final number will be calculated once 10-K is published.

While Netflix was among the first to offer video streaming, it is no longer the only option. Competition includes:

Figure 3: Netflix Faces More Competition Now Than Ever Before 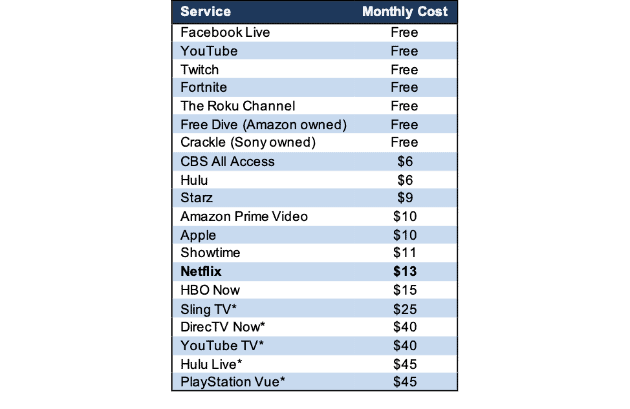 Apple (AAPL), Disney (DIS), Warner Media (T), and NBC Universal (CMCSA) are all expected to release their own streaming platforms by 2020. These new entrants, with vast resources, could pose a significant threat to Netflix when it comes to licensing existing content.

A big part of Netflix’s success in growing subscribers has been the content that its competitors provide.

Disney has already stated that it plans to end its licensing agreement with Netflix and pull its content by the end of 2019. Furthermore, Warner Media could pull the popular Friends series, which Netflix just paid $100 million to keep on its platform for another year. Additionally, NBC Universal could also pull The Office, which, according to recode “NBCU execs say Netflix has told them “The Office” generates more viewing hours than anything else on the service.” Such a loss (or losses) would truly test the stickiness of Netflix’s original content.

What is Netflix to do? What is defensible about the Netflix business model?

Meanwhile, competitors smell blood in the water. After a year when Hulu grew subscribers at a faster rate than Netflix, it decided to lower the price of its most popular plan by 25%, to just $5.99/month.

Pricing Power Is an Illusion

Pricing power means a firm can make money while charging lower prices than its competition. The narrative that Netflix holds significant pricing power is false. Netflix must raise prices to make money and stop the huge cash losses, which investors cannot afford to subsidize for much longer.

We put successful in quotes above because the mentioned shows have proven they can be monetized over many years. Not surprisingly, they’re produced by some of the top studios in the business, such as Disney.

It’s no secret that Disney is one of the best when it comes to monetizing. Its content can earn revenues through box office, merchandise, licensing deals, theme parks, and soon enough, streaming. With its Disney+ service, the firm will throw its full weight (and massive resources) into the streaming ring. Compared to Netflix, the trajectories of the two firms couldn’t be more reversed.

* 2018 FCF estimated based on financial data in NFLX’s earnings press release. Final number will be calculated once 10-K is published.

Where Do All These Pressures Leave Netflix – the AOL of OTT?

If Netflix doesn’t have pricing power, faces significant competition, doesn’t stack up well (financially) with the largest competition, and is losing the trust of debt and equity investors, what does it have? The ability to raise money.

But, if nothing about the business is defensible, besides raising money, which won’t last forever, does that make Netflix the AOL of over-the-top (OTT)? Jonathan Klein, former president of CNN, co-founder of Tapp Media, and current president of Vilynx stated such a comparison recently on Bloomberg TV.

Netflix was the first to stream video content to a mass amount of users. However, just as with AOL, nothing stops competitors from doing the same at equal or cheaper prices. Now, as Netflix raises prices, consumers can look elsewhere to find greater value. Furthermore, if your only advantage is the ability to spend cash, how do you compete with those that have significantly more cash, such as Apple, Disney, Alphabet (GOOGL), or Amazon (AMZN)? This juxtaposition could explain the rise in analysts voicing skepticism about Netflix while praising the future growth potential for Disney.

Can Netflix consistently provide better content than the rest of the industry for long enough to justify its current valuation? The evidence leads us to believe the answer to this important question is no.

This article originally published on January 28, 2019.

Scenario 1: Steady Growth – in this scenario, we assume Netflix can continue growing revenues at 26% a year (CAGR since 2011) and maintain current pre-tax margins of 11%. Such expectations are nothing to balk at, as even the most well run companies would be glad to grow revenues at such a pace for a prolonged period of time. Netflix would have to maintain this growth rate and margin for the next 17 years simply to justify its current stock price of $322/share. In this scenario, Netflix would be generating over $594 billion in revenue 17 years from now. Netflix would need over 3.8 billion subscribers at the current average price of Netflix’s subscriptions, which equals $13/month. See the math behind this dynamic DCF scenario.

While we find it hard to believe nearly half the global population will sign up for Netflix, many believe Netflix can continue to raise prices and improve profitability, rather than go after 3 billion subscribers. We can also model such an optimistic scenario, as seen below.

Scenario 2: Profitability in Line with Disney – in this scenario, we assume Netflix can grow revenues at 30% a year and more than double its pre-tax margin to 25%, which equals Disney’s 2018 pre-tax margin. Netflix would have to maintain this growth rate and margin for the next nine years to justify its current stock price. In this scenario, Netflix would be generating over $123 billion in revenue nine years from now. If we assume Netflix can increase its average price to $20/month, it would need 516 million subscribers to reach the revenue implied by this DCF scenario. See the math behind this dynamic DCF scenario.

Ultimately, to believe in Netflix at this price, you have to believe that the company can drastically increase its prices (or sign up half the world), reduce the growth in its content spending, and continue to grow its subscriber base at double-digit rates for nearly a decade or longer.

Figure II: Bond Investors are Demanding More for Their Capital

2 replies to "Reality Is Closing in on Netflix"