A picture is worth a thousand words and so is Figure 1. Figures 2 is good too. The inescapable truth behind AAPL’s valuation is that market expectations are way too high.

Apple’s ROIC Is An Ephemeral Aberration

This article provides some empirical evidence behind my putting Apple (AAPL) in the Danger Zone last week because its return on invested capital (ROIC) is outrageously high. That fact underscores why valuing this company or any other with the expectation that such a high ROIC was sustainable would be a mistake.

Figure 1 plots the market value of the top 1500 companies by market cap that I cover against ROIC. This figure illustrates just how far out there APPL’s ROIC is. It also illustrates the expected impact on the stock’s market value when the ROIC comes back to earth.

Betting on Apple’s ROIC continuing to be an outlier is foolish. I see AAPL’s ROIC rejoining the pack within the next few years, and the market will reflect that mover even sooner.

In my last article on AAPL, I explained why I think AAPL’s ROIC would fall to at least as low as Google (GOOG) or Microsoft’s (MSFT) ROIC, which are 34% and 71% respectively. I think, given the competitive markets in which AAPL competes, the company’s ROIC will eventually be much lower than both GOOG and MSFT. 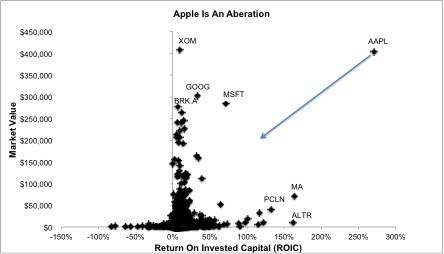 And please try not to compare AAPL to Exxon (XOM) in order to justify AAPL’s valuation. Those two businesses are not on the same page when it comes to scale and competitive advantage. XOM had nearly $500 billion in revenue last year, while AAPL had $150 billion. The value of AAPL until now is driven by its unsustainably high margins. Until Apple delivers the next iPhone-like revolutionary product, it is going to be slaughtered by lower-cost competitors. As I wrote in this week’s Danger Zone article on Amazon (AMZN), selling a non-rival product, e.g. smart phones that others can replicate, means you are stuck in a low margin business. No one can replicate the petroleum reserves that XOM owns.

In case you are wondering about whether or not my analysis on 3000 stocks is worth its salt, I submit Figure 2. This figure, based on the same 1500 companies as Figure 1, plots my net operating profit after-tax (NOPAT) against market values with an r-squared of 88%. 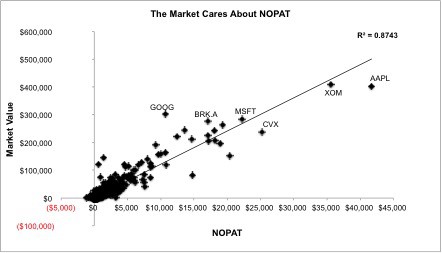 Otherwise, the level of NOPAT generated by any additional invested capital is lower, the company is not as efficient and NOPAT grows at a slower rate.

Growing a business with a 120%+ ROIC is very difficult to do at any stage and even more so for a company is markets as mature and competitive as the markets Apple is in.

This analysis is just another way to articulate the thesis I provided in my last article.

2 replies to "The Truth Behind AAPL’s Numbers"