We closed this position on February 25, 2014. A copy of the associated Position Update report is here.

This article is the first in a series on companies manipulating obscure accounting rules to prop their earnings. Join the priority alert to follow this theme.

Recent news of trans-Atlantic capacity reductions sent Delta Airlines’ stock (DAL) down about 7%. I recommend investors sell DAL now because I think it could fall much further. As more investors realize how much the company is propping up its earnings with pension and postretirement plan (“pensions”) assumptions, the stock could plummet again.

Delta’s abnormal accounting assumptions may provide a short-term boost to earnings, but they will likely lead to a long-term drag or possible bankruptcy. Eastman Kodak (EKDKQ.PK) used the same trick to prop up its 2010 earnings, and now it is bankrupt just as I predicted in my March 2011 article “Dead Company Walking: Sell Eastman Kodak”.

For readers who wonder whether 8.93% is abnormally high, the answer is yes. Out of the 1,021 companies with pensions that I cover, 98% of them have a lower EROPA. Only 96 of the 1,021 raised their EROPAs in 2012 while 525 lowered and 400 made no changes. In other words, DAL’s EROPA assumption is not only among the highest but it is also rising when the majority is falling.

Since DAL’s pensions are so large, its pension costs play a prominent role in earnings, much more so than most companies. As a percent of revenue, DAL’s net periodic benefit cost (with the current EROPA) ranks higher than 92% of the companies we cover.

Assuming such a high EROPA lowers the amount of money that DAL has to pay into its pensions, which lowers the company’s overall expenses and increases accounting earnings.

Given the evidence presented here, I think it is fair to say that DAL is stretching the limits of its EROPA, which props up earnings.

Pensions Are Already Underfunded by $14.1 billion

Doubtful That Delta Can Grow Its Way Out Of Its Problems

If Delta were in a high growth industry with excellent prospects for future profits, one could argue that the company could eventually earn its way out of the underfunded pensions hole it has dug for itself. That is a tough argument to make for a company in such a competitive business. The recent announcement that Delta plan to cut capacity on its trans-Atlantic routes by 5% does not exactly inspire expectations for profit growth.

Worse yet, despite reporting profitable GAAP accounting profits, my model suggests that Delta is an unprofitable business even if one assumes its EROPA is fair and accurate. Figure 1 compares DAL’s economic earnings to its accounting earnings. In 2011, DAL reported $854 million in accounting profit while I believe the company’s true cash flows were closer to   -$2.2 billion.

Figure 1: Accounting Profits Are a Mirage 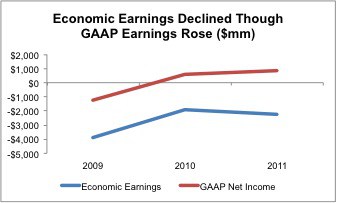 The largest drivers of the differences in reported accounting and economic earnings for DAL are $8.2 billion in off-balance sheet debt from operating leases (about 86% of the company’s market cap) and $7.5 billion of accumulated asset write-downs we put back on the company’s balance sheet to calculate its true invested capital. Here are details on our asset-write-down adjustments.

From where I sit, the company is in an intractable situation. It is not making any money and its liabilities are formidable: pensions at $14.1 billion plus total debt of $21.9 billion equals $36 billion.

Further, I expect DAL’s pensions are likely to become more underfunded and its liabilities are likely to grow as time progresses. Last year, despite a significant increase in EPS compared to the prior year, the underfunded status of DAL’s pensions grew from $11.4 billion at the end of 2010 to $14.1 billion at the end of 2011. Making matters worse, the unusually high EROPA could exacerbate the underfunded pensions problem as it reflects potentially unrealistic expectations about the company’s ability to fund its pensions through stock market gains rather than company and employee contributions.

Even in the unlikely event that DAL’s liabilities do not increase, equity investors should be intimidated by the $26 billion in existing liabilities that have a senior claim on Delta’s future profits. If DAL does generate future profits, those profits have to be large enough to cover the $36 billion in senior claims plus the expectations baked into the current stock price before equity investors can make significant money in DAL.

For those that say all of this information is already baked into the stock price, I suggest you look again. According to my discounted cash flow model, to justify the stock valuation at $11.17/share, the company has to grow its after-tax cash flow (NOPAT) by 15% compounded annually for nine years. If I lower the implied growth rate to 10%, the current valuation implies 10% growth in NOPAT compounded annually for 21 years. I underscore that those are the expectations baked into the current stock price. For investors to believe DAL deserves a higher valuation/stock price, they must believe that the company’s future profit growth will be even greater than that baked into the current stock price.

Delta Will Stop Trading Inversely With Price Of Oil

Many investors have pointed out that DAL trades based on the movement of the price of oil. Certainly, looking at the ticker tape over the past couple years, it is hard to argue against that assertion. However, the same was true of American Airlines before it traded based on its inability to meet its financial obligations. History is only a guide to the future if the future is the same as the past.

In my opinion, it is only a matter of time before Delta’s management will have to guide earnings expectations lower, perhaps much lower. At which point, the stock will trade more on the underlying economics of the business than oil, just as it did today after announcing the plans for capacity reduction. Oil is down and so is DAL.

I think the acquisition of the Trainer (no relation) refinery is nothing more than a diversion from DAL’s underlying financial troubles. Here are my reasons:

In summary, using the footnotes to lift the accounting veil on DAL’s financial situation reveals some earnings and liabilities issues for a stock that is already expensive and could suffer downward pressure when investors become more aware of them.

Here is a list of the ETFs and mutual funds that allocate the most to DAL. Get free reports on these funds from my free mutual fund and ETF screener.

Disclosure: I am short DAL. I receive no compensation to write about any specific stock, sector or theme. Delta did not respond to my multiple requests, beginning 5/16, to discuss their pension accounting assumptions and this report. Nor did they respond to Barron’s columnist Vito Racanelli for his recent article on the same topic.

[1] $3.4 billion equals the perpetuity value of the cost savings goals stated by DAL management. The calculation is $300 million divided by DAL’s weighted-average cost of capital (WACC) of 8.76%. Here is my model on DAL’s WACC.

1 Response to "Bail Out of DAL Before the Stock Crashes"