We published an update on TJX on May 26, 2021. A copy of the associated Earnings Update report is here.

The Consumer Cyclicals sector currently earns an Unattractive rating based on the market-weighted aggregation of the 443 stocks we cover in the sector. The Amazon (AMZN) impact and slow growing economy has led to declining profits and even bankruptcy for many companies in the sector. However, a few companies have overcome these struggles and managed to thrive.

By leveraging our Robo-Analyst technology[1] to parse and analyze company filings, including the footnotes and MD&A, we have identified companies with multiple years of after-tax profit (NOPAT) growth and above average returns on invested capital (ROIC)[2]. These companies are also undervalued compared to peers, and our DCF model reveals low expectations for future profit growth baked into the current stock prices.

Numerous case studies show that getting ROIC right is an important part of making smart investments. We also know that there is a strong correlation between improving ROIC and increasing shareholder value. Per Figure 1, ROIC explains 75% of the difference in valuation for the 443 Consumer Cyclicals stocks under our coverage. THO, TJX, and AMCX all trade at significant discounts to sector peers as show by their position below the trend line in Figure 1. 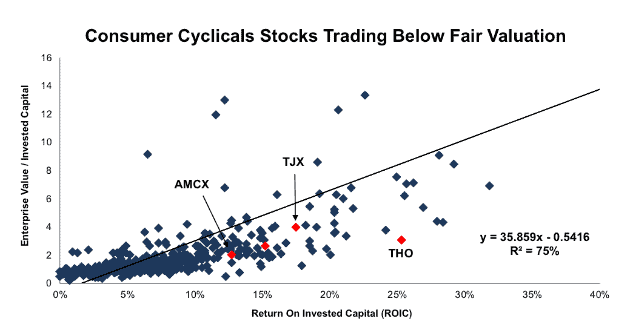 Besides trading below peers, THO, TJX, and AMCX have grown NOPAT each of the past five years and currently earn an ROIC at or above the Consumer Cyclicals sector average of 13%. Per Figure 2, each of these three stocks also has a lower price-to-economic book value (PEBV) ratio than the sector. A lower PEBV ratio indicates the market expects less profit growth from these three stocks than it does the sector as a whole, despite THO, TJX, and AMCX being more profitable, as measured by ROIC.

Thor Industries, a motorized and towable recreational vehicle (RV) manufacturer, was first featured as a Long Idea in June 2016 and subsequently closed in October 2016. Over this time, THO was up 30% while the S&P 500 was up just 2%. Since closing the Long Idea, THO’s fundamentals have only strengthened, and a recent drop in valuation makes for an excellent “buy the dip” moment.

In addition to profit growth, THO has efficiently managed its balance sheet despite acquiring many smaller RV manufacturers over the years. Average invested capital turns, a measure of balance sheet efficiency, have increased from 3.54 in 2012 to 4.48 TTM. Rising margins and efficient capital use have improved THO’s ROIC from 14% in 2012 to a top-quintile 25% TTM. The firm has also generated a cumulative $407 million (7% of market cap) in free cash flow (FCF) since 2012.

The recreational vehicle industry has been growing significantly in recent years, with a 12% compounded annual growth rate in unit shipments since 2012. Thor has capitalized on this industry growth and reported record revenue and net income in fiscal 2Q18. Going forward, the Recreation Vehicle Industry Association expects RV shipments will grow to new records in 2018. Thor management also notes that the industry is attracting new buyers at an impressive pace. 34% of RVs sold in 2016 were to new buyers, with 80% of the new buyers under age 65.

THO is down 29% year-to-date, while the market is down just 3%. This underperformance is largely attributable to concerns of President Trump’s recent tariff announcement. However, these concerns appear to be overblown. Thor noted in its fiscal 2Q18 call that the tariffs will have less impact on its business than others, as it purchases its steel and aluminum from domestic suppliers. Additionally, the firm noted that it is already working with suppliers to minimize any impact and believes it can pass price increases on to consumers if necessary to maintain strong profit margins.

At its current price of $109/share, THO has a PEBV ratio of 0.9. This ratio means the market expects THO’s NOPAT to permanently decline by 10%. This expectation seems rather pessimistic for a firm that has grown NOPAT by 17% compounded annually since 1998 and 25% compounded annually over the past five years.

If THO can maintain current NOPAT margins (6%) and can grow NOPAT by 7% compounded annually over the next decade, the stock is worth $143/share today – a 31% upside. This combination of strong fundamentals and undervalued stock price earn THO a spot in April’s Most Attractive Stocks Model Portfolio.

The TJX Companies, a discount apparel and home fashions retailer, has been able to successfully fend off the growing threat of Amazon and e-commerce. Much like previous Long Idea Ross Stores (ROST), TJX is able to compete with online offerings by providing deals on apparel and home goods that often cannot be replicated online.

In addition to profit growth, TJX has efficiently managed its balance sheet and the capital invested into its business. Average invested capital turns, a measure of balance sheet efficiency, are currently 2.3, which is also the average over the last decade. Rising margins and efficient capital use have improved TJX’s ROIC from 12% in 2007 to a top-quintile 17% TTM. The firm has also generated a cumulative $9.6 billion (19% of market cap) in FCF since 2012.

In a difficult retail environment, TJX has consistently broken trend. Fiscal 2018 represented the 22nd consecutive year in which comparable store sales increased year-over-year. Comparable store sales growth is a direct result of TJX’s value proposition to consumers and the ability of its business model to adapt to consumer demands.

Despite consistent comparable store sales and NOPAT growth, TJX is up just 8% over the past two years while the S&P 500 is up 27%. At its current price of $81/share, TJX has a PEBV ratio of 1.3. This ratio means the market expects TJX’s NOPAT to only grow 30% from current levels over the remaining life of the firm. This expectation may seem optimistic for some firms, but not TJX, considering it has grown NOPAT 12% compounded annually for nearly 20 years, or since 1998. While TJX’s PEBV is higher than most companies we recommend, the consistent and long-term track record makes these expectations look easily beatable.

If TJX can maintain current margins (8%) and grow NOPAT by 6% compounded annually over the next decade, the stock is worth $97/share today – a 20% upside. Add in the 1.6% dividend yield and 22 consecutive years of dividend increases and TJX could be an excellent portfolio addition.

AMC Networks, a cable television operator and content creator, showcases strong fundamentals in a market where quality content is king. Since 2012, AMCX’s revenue has grown 16% compounded annually while its NOPAT has grown 17% compounded annually, per Figure 5. Increased profit growth can be attributed to rising NOPAT margins, which have improved from 17% in 2012 to 18% in 2017.

AMCX currently earns an ROIC of 13%, which is equal to the Consumer Cyclicals sector average.  The firm has also generated a cumulative $863 million (28% of market cap) in FCF over the past three years.

AMC is best known for creating critically acclaimed series such as Mad Men, Breaking Bad, and The Walking Dead. Many believe the company’s success is tied to its most recent hit, The Walking Dead, and that its profits will plummet when that show ends.

However, concerns about The Walking Dead are nothing new. In fact, ratings for The Walking Dead have been in steady decline for the past three seasons, yet AMCX has continued to improve NOPAT. Moving forward, AMC is looking to diversify popular franchises into different revenue streams, such as The Walking Dead video games and merchandising. AMC has also created spin off shows such as Better Call Saul and Fear the Walking Dead to capitalize on the success of its hits.

The company also has deals in place to provide its content through Comcast (and soon YouTube) via AMC Premiere. Additionally, in the battle for content, AMC remains a takeover target. Disney (DIS) could immediately boost its own upcoming streaming service, or supplement Hulu’s offerings, in which it owns a stake. Similarly, Apple (AAPL) could look to AMCX should its attempt to develop original content not succeed as planned. Beyond streaming assets, a competing cable provider, such as Discovery Communications (DISCA) could view AMCX as a way to increase its leverage and pricing power with advertisers.

AMCX’s current economic book value, which measures the no-growth value of the stock, is $123/share – or 141% above the current price. If AMCX can maintain 2017 NOPAT margins (18%) and grow NOPAT by just 3% compounded annually for the next decade, the stock is worth $139/share today – a 173% upside.

This article originally published on April 4, 2018.

[2] Ernst & Young’s recent white paper, “Getting ROIC Right”, proves the superiority of our research and analytics.