Investors are pessimistic about this pure play poultry producer while failing to recognize how its business has survived, and grown, through numerous cycles. With impressive profit growth, strategic operating expansions, and an unusually low valuation, our Stock Pick of the Week is Sanderson Farms, Inc. (SAFM: $72/share).

The chicken business has seen many ups and downs over the years. One constant, however, has been the steady increase in Sanderson’s after-tax profits (NOPAT), which have risen 18% compounded annually since 1998. Since 2012, Sanderson has grown NOPAT by 110% compounded annually and increased its NOPAT margin to 9% from 2%. Figure 1 shows that, despite big fluctuations, Sanderson’s profits remain in a strong upward trend. 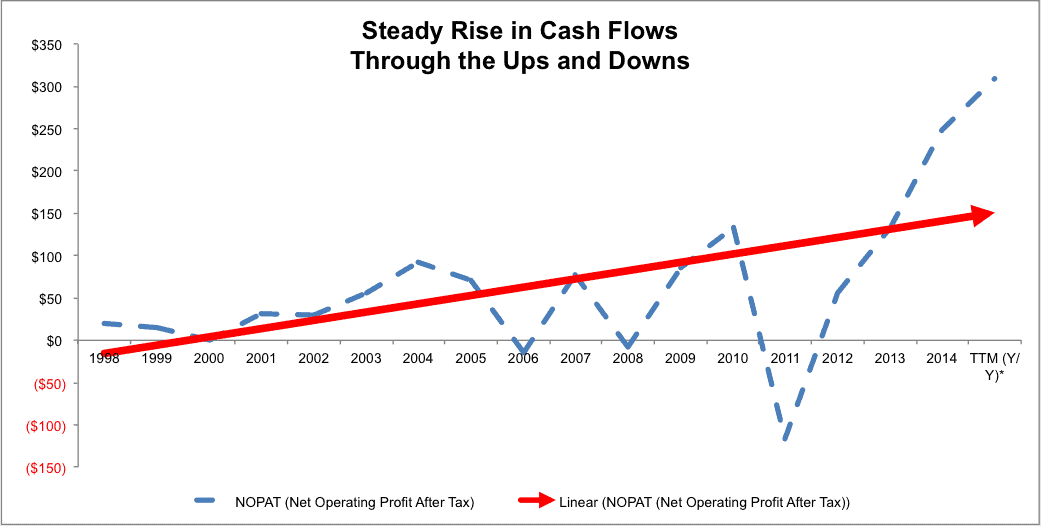 The company currently earns a top-quintile return on invested capital (ROIC) of 31%, which is a significant increase from 8% generated in 1998. Additionally, Sanderson has $109 million in free cash flow and low debt of only $30 million on a TTM basis.

For the first time in over 100 years, Americans are consuming more chicken than beef and restaurants are showing increased usage of chicken as well.

With margins at record highs, management has wisely adopted a strategy of increasing operating capacity in high margin segments of the chicken market. Sanderson recently finished construction of a production plant in Texas that specializes in big-bird deboning products, which are a more profitable segment. The plant should result in a 15% increase to overall production. Sanderson has also announced plans for another big-bird deboning plant in North Carolina. Agile positioning of the business to target high margin products shows management is capable and focused on making the most of the profit opportunities as they emerge.

The bear case for Sanderson rests on the fear of an industry downturn, as many believe the price of corn, which is at its lowest level of the past eight years, cannot remain depressed for much longer. In addition, chicken prices look set to fall, as demand outside the U.S. has dropped due to the recent avian flu outbreak.

What most bears fail to realize is that a decline in the chicken market, whether through falling chicken prices or increasing corn prices, is already (more than adequately) priced into the company’s valuation, as we will show below.

Worries about the avian flu are overblown too. First, the disease has mostly struck hens, which produce eggs, rather than broilers, which are raised for meat. Second, the flu has only been prevalent in the Midwestern US, whereas most of Sanderson’s production facilities are located in southern states. Bears will argue that the avian flu related import restrictions placed by foreign countries will damper Sanderson’s operating performance, but exports made up only 10% of total revenue in 2014.

In order to derive the true recurring cash flows, an accurate invested capital, and a real shareholder value, we have made several adjustments to Sanderson’s 2014 10-K. The adjustments are:

Balance Sheet: we made $182 million of balance sheet adjustments to calculated invested capital with a net decrease of $52 million. The largest adjustment made was the removal of $87 million due to midyear acquisitions. This adjustment represented 9% of reported net assets.

Valuation: we made $110 million of adjustments with a net decrease of $56 million. The largest adjustment to shareholder value was the removal of $43 million in net deferred tax liability. This liability represents 2% of Sanderson’s market cap.

Negative sentiment has driven the stock price down 13% year-to-date despite recent quarterly results showing year-over-year improvement in sales and operating income. This price decline has left Sanderson significantly undervalued. At its current price of $72/share, Sanderson has a price to economic book value (PEBV) ratio of 0.3. This ratio implies that the market expects the company’s NOPAT to permanently decline by 70%. Such low expectations seem too pessimistic given Sanderson’s demonstrated ability to grow profits over the long term (see Figure 1).

Nevertheless, let’s see what a fairly grim scenario means for the valuation. If Sanderson’s NOPAT margin immediately fell from 11% TTM to 4% (10-year average) and the company only grew revenue by 9% compounded annually (five year average) over the next five years, the stock would be worth $115/share today – a 62% upside.

With over 34% of shares outstanding sold short, Sanderson is the one of the most shorted stocks in the NASDAQ. Continued profit growth, driven by expanding operations and increasing chicken prices, or both, would discredit the overwhelming pessimism surrounding the company and reverse the negative stock action. Look towards the new Texas plant becoming fully operational as a specific catalyst because its focus on the high margin big-bird deboning segment is expected to bring further value to the production process.

Sanderson executives receive an annual cash bonus tied to earnings per share and operational performance in comparison to industry peers. Equity awards, which are distributed equally between restricted stock and performance shares, are determined by a multiple of the respective executive’s base salary that is set by the compensation committee. This multiple is determined by peer data and market averages and is then converted to a dollar amount to determine number of shares to award the executive. Executives can elect to forgo a portion of their annual salary and cash bonus and, instead, receive restricted stock units in its place.

So far in 2015, Sanderson has repurchased 700,000 shares, which represents 3% of shares outstanding. In April, the board of directors authorized the repurchase of up to one million shares in addition to what has already been repurchased this year. This authorization runs through April 2018. Sanderson has a long history of expanding and extending their share repurchase activities.

Disclosure: David Trainer and Kyle Guske II receive no compensation to write about any specific stock, style, or theme.