We closed this position on October 27, 2020. A copy of the associated Position Update report is here.

Check out this week’s Danger Zone interview with Chuck Jaffe of Money Life and Marketwatch.com

Usually, all companies in the same sector look highly profitable when they enjoy strong cyclical tailwinds. Only after a cyclical downturn and trough are we able to separate the good companies from the bad. This week’s Danger Zone stock looks to be the weak sister in the housing market. This company’s profits, despite some adept earnings head fakes, have not kept up with peers or the cyclical rebound in the sector. As the exuberance lifting all stocks has waned, this stock has already come under pressure, and we believe it has much further to fall as EPS management cannot mask the lack of real cash flows much longer. KB Home (KBH: $15/share) is in the Danger Zone this week.

While most astute analysts would account for the income tax benefit when analyzing/valuing the business, they may not account for the drag on earnings created by off-balance sheet liabilities and equity capital. In 2014, the cost of KB Home’s invested capital was $436 million, or $4.39/share that we deduct from reported earnings.

After removing this cost, and accounting for the other 30+ adjustments we make, we see that KBH’s economic EPS was actually -$4.18/share compared to GAAP EPS of $10.26/share (unadjusted) in 2014. This misleading trend in earnings helped land KB Home on the Most Dangerous Stocks list for the past two months.

Despite once earning a double digit (20% in 2005) return on invested capital (ROIC), KB Home now earns a bottom quintile 1% ROIC, down from 3% in 2013, the highest level earned since the housing bubble burst.

Per Figure 2, KB Home, by a rather wide margin, earns the lowest ROIC of numerous competitors, which leaves it with little competitive advantage in a highly competitive industry.

Many bulls believe that the improving housing market, along with the slow but marginally improving economy will lead homebuilders to new heights. However, this view not only depends on housing continuing the strong cyclical upswing for long into the next decade but also overlooks KB Home’s inability to capitalize on the cyclical rebound in housing to date,

Figures 3 shows that annual new home sales don’t have far to go to reach their historical mean. For the upswing in the sector to continue much longer, we must see those sales sustain above historical trend for significant time. 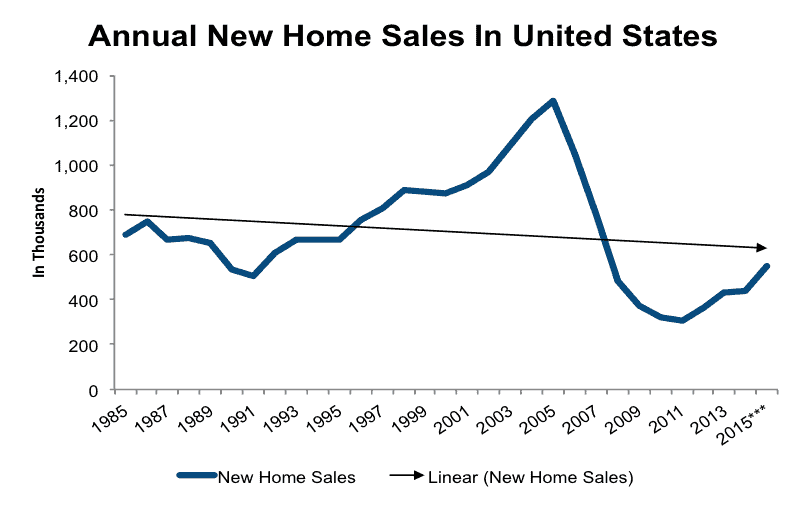 ***Annualized through August 2015 per most recent census release

Apart from annual new home sales nearing their historical trend, Figure 4 shows that the average sale price of new homes has already surpassed its historical mean. Coupled with fact that the average household income has not meaningfully increased since 2011 and median weekly earnings of U.S. workers 16 years and older has actually fallen over the same timeframe, a top in new home prices for the foreseeable future may have been reached. 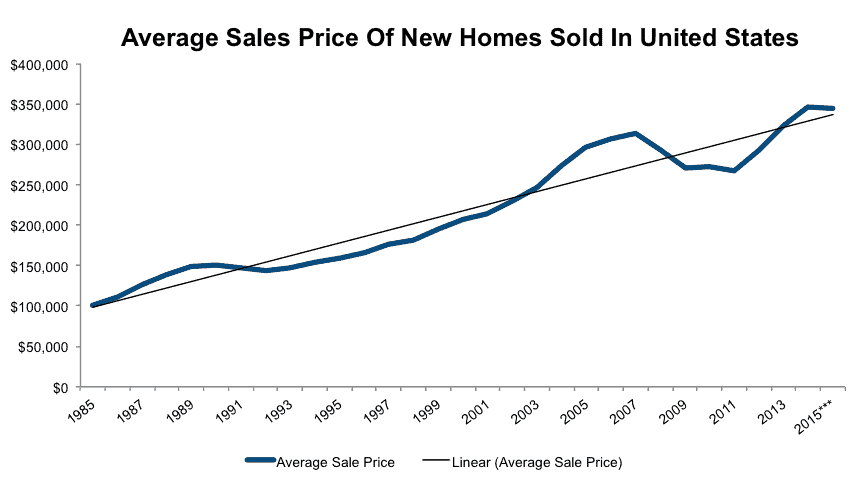 Weak Sister Is Getting Squeezed Out By Stronger Competitors

In 2005 when the company’s economic earnings peaked, KB Home’s held a 6% market share of all homebuilders, based on total closings. Since then, the company has not kept pace with peers and now holds only a 3% market share. With the lowest profitability in the industry, it looks unlikely to reverse this trend. The competitive disadvantages KB Home’s faces materialize in the company’s economic earnings, which have declined more than peers and are headed downward recently despite the uptrend in the housing market.

Figure 5: Economic Earnings Have Failed To Recover Amid Rebound 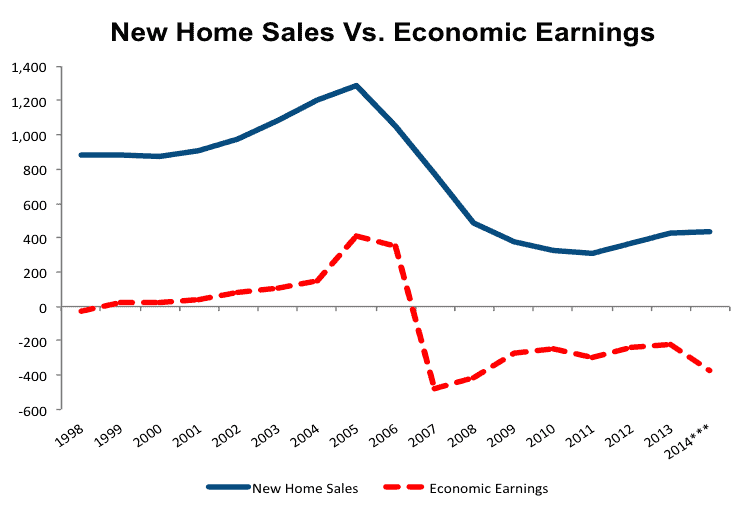 Despite the issues above, the current expectations embedded in KBH would imply the company returns to pre-bubble levels of profitability for an extended period of time. To justify its current price of $15/share, KB Homes must grow NOPAT by 16% compounded annually for the next 15 years. To achieve this kind of profit growth, the company would need to achieve the same pre-tax margin (10%) that it earned, on average, during the last housing bubble. The current pre-tax margin is 3%. This expectation appears highly optimistic given that the company has only grown NOPAT by 3% compounded annually over the past five years and margins remain well below pre-bubble levels.

Even if bulls are right, and KB Home is able to achieve higher margins through rising home prices, shares still have large downside. If KB Home can double its pre-tax margin to 6% (3% last year) and grow NOPAT by 24% compounded annually for the next decade, the stock is only worth $5/share today – a 66% downside.

Note that any NOPAT growth below this level, or without a further increase in margins, and our DCF model returns a negative equity value, further highlighting the exuberant expectations already baked into KBH.

We do not see a lot of merger activity in homebuilding because land is more valuable than business operations so buying a competitor can be much more costly than buying land outright. Nevertheless, mergers do occur. In 2015, Standard Pacific announced a merger with Ryland, and prior to that, PulteGroup merged with Centex in 2009. While KB Home’s could be a potential target due to its smaller market cap, its large debt load should concern any potential buyer. KB Home’s debt, including off balance sheet operating leases sits at $3 billion, or 223% of market cap. With such a large debt load and significantly overvalued shares, an acquisition at current prices would be unwise.

When KB Homes reported quarterly earnings on 9/26, they reaffirmed that they believe housing growth will continue through 2016. However, given the data above, we believe this to be a highly optimistic expectation. While we recognize the economy is improving, we don’t believe it is at a high enough rate to sustain the high housing prices nor the growth expectations baked into KBH. Without a return to housing bubble days, we believe that within the next year, KB Homes will miss the expectations it has set for itself, causing shares to sink.

Short interest in KBH stands at 14.7 million shares, which represents 16% of shares outstanding. It would appear as if we’re not alone it thinking that KBH is rather overpriced.

Balance Sheet: we made $4.1 billion of balance sheet adjustments to calculated invested capital with a net increase of $969 million. The largest adjustment was the inclusion of $2.4 billion due to asset write-downs. This adjustment represented 56% of reported net assets.

Valuation: we made $3.6 billion of adjustments with a net effect of decreasing shareholder value by $2.6 billion. The most notable adjustment to shareholder value was the removal of $63 million due to underfunded pensions. This liability represents 5% of KB Home’s market cap.

Apart from base salaries, executives receive annual incentive bonuses and long-term equity awards. Annual incentives are determined based on the achievement of target pre-tax income and revenues. Long-term equity awards are based upon 3-year EPS growth, ROIC, and revenue growth versus peers. Unfortunately, only one of these metrics, ROIC, is a good measure of value creation, while the rest focus on numbers that are not representative of the true growth of the business. While we’ve certainly seen worse executive compensation plans, KB Home’s plan could be improved.

There are no funds under coverage that receive our Dangerous-or-worse rating and allocate significantly to KB Home.