Demandware (DWRE: $72/share) IPO’d in 2012 based on plans to create shareholder value by providing e-commerce platforms for retailers and brands worldwide. So far, the plan is not working as the company’s profits have declined. Paradoxically, the stock price has climbed over 140% since its IPO. The stock is dangerously overvalued and earns a place in the Danger Zone this week.

Demandware joins our list of cloud-based companies that fail to make money. The list includes names such as Salesforce.com (CRM), Workday (WDAY), and Box (BOX). Unfortunately, too many investors appear willing to overlook this fundamental flaw and focus on revenue growth instead. Since 2012, Demandware has grown its revenue by 42% compounded annually. Businesses aren’t built upon revenue growth though. Only profits can sustain a business.

Net operating profit after-tax (NOPAT), which has never been positive, has moved in the opposite direction to revenue. Since 2012, NOPAT has fallen from -$6 million to -$26 million in 2014. This trend has continued into 2015, as NOPAT has declined even further to -$28 million on a trailing 12-month (TTM) basis. 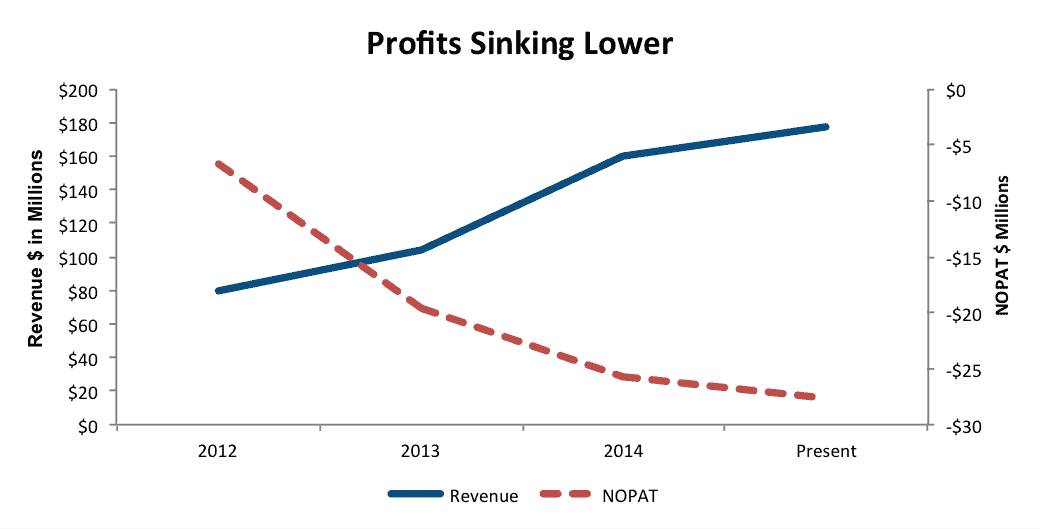 The biggest reason for the company’s widening losses has been its rising costs. In 1Q15, revenues grew 54% year over year (YoY), while cost of revenues grew 69%. Since 2012, cost of revenue has grown by 31% compounded annually and operating expenses have grown 53% compounded annually. Attracting new customers and developing new features has been increasingly expensive for Demandware.

As could be expected, with negative profits, Demandware has also never achieved a positive return on invested capital (ROIC). In 2012, Demandware earned a -16% ROIC, which has since fallen to -35% in 2014 and -23% on a TTM basis. Operating pretax margins (NOPBT) have only declined since IPO from -9% in 2012 to -16% on a TTM basis as well.

Fierce Competition In a Saturated Market

Demandware generates revenues through creating and servicing clients’ e-commerce activities, including online presence, omni channel integration, or customer relationship management. Demandware takes a percentage of sales generated through these channels. Investors are failing to realize just how much competition this business model creates. In the same year Demandware went public, 4 other cloud software companies had a public offering, highlighting the exuberance the market has had. In addition, IBM, Oracle, HP and Dell all have competing products. For example, Oracle’s ATG Web Commerce product can provide companies with an established digital presence but can also provide integrated hardware and software infrastructure. More importantly, Oracle can do so profitably giving it a big advantage in pricing and product innovation.

IBM’s WebSphere product also competes with Demandware. Smaller and more aggressive competitors lurk within the market. Salesforce.com, Workday, and ServiceNOW all compete in the cloud/big data market, albeit unprofitably.

Aside from the traditional technology based competitors, Demandware indirectly competes with traditional retailers. Demandware receives a portion of revenues generated through sites it develops, and while this revenue sharing aligns the company with clients, it makes the company dependent on its clients and vulnerable to their retail competitors, such as Amazon and eBay, whose margins are razor thin.

Figure 2 shows how poorly Demandware stacks up against many of its numerous competitors. Due to Demandware’s low ROIC, the company will face pressure from competitors who possess greater pricing power and the ability to reinvest in their business

The success of Demandware relies heavily upon its ability to add new clients, create new services to further integrate clients into its system, and at some point make money. To date, the company’s profits have only declined while competition has increased. Beware revenue growth that belies profit declines. That trend has a very limited life span.

Demandware’s position as a lower cost alternative leaves it little pricing flexibility. Low price doesn’t always win out in the technology sector. Ultimately, retailers will gravitate towards the product that provides the best overall value. Larger competitors, like IBM or Oracle, have greater resources, brand cache, and exposure. These competitors stand squarely in the way of Demandware’s future.

The industry in which Demandware operates lends itself to rampant acquisition speculation. The hope is that larger competitors will purchase Demandware, and large tech firms have a long history of buying smaller firms to bolster existing products or enter new spaces. However, in this case, potential acquirers IBM and Oracle already have robust business models providing cloud-based e-commerce, so purchasing an unprofitable Demandware does not provide any strategic value. Take Salesforce.com as a prime example of a cloud business struggling to find a suitor. It would be much wiser for any potential acquirer to let the price of Demandware fall back to more reasonable levels before initiating any acquisition efforts.

In order to derive the true recurring cash flows, an accurate invested capital, and a real shareholder value, we have made several adjustments to Demandware’s 2014 10-K. The adjustments we made are as follows:

The largest balance sheet adjustment made was the removal of $36 million in assets related to midyear acquisitions. This adjustment represented 12% of reported net assets. Despite removing this amount from invested capital, Demandware still generated a -35% ROIC in 2014.

Valuation is Out of Touch

Demandware is dangerously overvalued. To justify its current price of $72/share, the company must raise its pretax (NOPBT) margin from -16% to 5% and grow revenue by 31% per year for the next 18 years. In this scenario, Demandware would then be generating over $20 billion in revenue, higher than eBay’s 2014 revenue. Growth at the levels implied by the market price seems unrealistic given the stiff competition the company faces. A more realistic value for Demandware, even giving them credit for 15% NOPBT margins (above retailers but below large tech firms like IBM and MSFT), and 10% revenue growth for the next decade, the stock is only worth $12/share today –– a 83% downside from current levels.

The biggest potential catalyst for Demandware, much like other recent Danger Zone stocks, is an earnings miss. When revenue growth stories fail to produce the profit results the market is expecting, the stock can drop drastically. Take Workday’s recent 15% decline after recent earnings or even Netflix’s 20% drop in late 2014 as prior examples. Demandware walks a fine line between “hyper revenue growth” and unprofitable cloud business. An earnings miss can easily flip sentiment from exuberant to negative.

Short interest stands at 3.6 million shares, or less than 10% of shares outstanding.

Heavy Insider Selling, Not Much Buying

In the past 12 months, insiders have bought 265 thousand shares and sold 1.5 million shares, for a net of 1.2 million shares sold. This figure represents 3% of all shares outstanding.

Executive Compensation Not Based On Profits

Demandware’s executives are paid annual cash bonuses in addition to long-term stock awards. 90% of the cash bonuses are based upon corporate performance with the remainder based upon individual performance. Half of the corporate performance bonus is based upon non-GAAP EBITDA and a company defined “renewal dollar percentage”, while the other half is based on the discretion of the compensation committee using company-defined metrics for success. The compensation committee is able to award executives with equity incentive awards that are aimed at aligning executives with the interests of shareholders. Metrics for how executives earn these equity awards are not abundantly clear in Demandware’s proxy document, other than they are based on individual performance and remaining competitive against the company’s peer group.

The following ETFs and mutual funds allocate significantly to DWRE and earn our Dangerous or Very Dangerous ratings.