We closed this position on October 1, 2012. A copy of the associated Position Update report is here.

Goodyear Tire & Rubber (GT) must overcome $3.7 billion in underfunded pensions plus $6.3 billion in debt ($1.1 billion of which is off balance sheet) before investors could see any upside.

Somewhat aggressive accounting for its “U.S.” and “Non-U.S. Pensions” and “Other Postretirement Benefit” plans (“pensions”) understates the gravity of pensions in their reported earnings. However, Goodyear has been very forthright in discussing the cash flow implications of their underfunded pensions.

Contrary to Delta Airlines (DAL) and other firms we contacted, GT’s IR department was quite willing to answer my questions about their pensions liabilities.

The company’s stated plans to pay down its off-balance sheet liabilities depend on a fairly positive long-term economic outlook.

I think management at Goodyear is well-aware of their off-balance sheet issues and is taking steps to address them. However, if business headwinds persist, they simply may not have the cash flow required to overcome their pension liabilities.

If business does not remain buoyant, I think GT’s earnings estimates will have to be lowered to reflect the looming pension liabilities.

Since GT’s pensions are so large, its pension costs play a prominent role in earnings, much more so than most companies. GT’s net periodic benefit cost after tax (the cost attributable to pensions with the current EROPA reported in GAAP earnings) is over 62% of 2011’s net income.

Assuming a high EROPA enables GT to lower the costs it must report in earnings for paying into its pensions. In turn, the company’s overall expenses are lower and accounting earnings are higher.

I think it is fair to say that GT is stretching the limits of its EROPA, which props up earnings.

Pensions Are Already Underfunded by $3.7 billion

One could argue that stretching the limits of EROPA and minimizing the amount of money it pays into its pensions is a fair and good strategy for a company whose pensions were adequately funded. That argument does not hold for GT as its pensions were under-funded by $3.7 billion as of 12/31/2011. The sum of the “net funded status” for the U.S., Non-U.S. and Other Postretirement Benefits” on page 93 of the company’s 2011 10-K shows where I get the $3.7 billion value, which is about 1.5 times the company’s market cap.

Doubtful That GT Can Grow Its Way Out Of Its Liabilities

If GT were in a high growth industry with excellent prospects for future profits, one could argue that the company could easily earn its way out of the underfunded pensions hole. That is a tough argument for a company in such a competitive and low margin business in a challenging economic environment.

Despite reporting profitable GAAP accounting profits, my more comprehensive model suggests that GT is an unprofitable business even if one assumes its EROPA is fair and accurate. Figure 1 compares GT’s economic earnings to its accounting earnings. In 2011, GT reported $321 million in accounting profit while I believe the company’s true cash flows were closer to -$341 million. 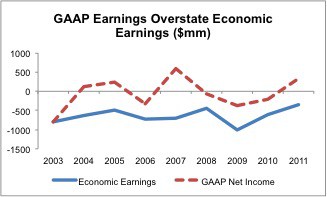 One of the largest drivers of the differences in reported accounting and economic earnings for GT is $1.1 billion in off-balance sheet debt from operating leases (about 45% of the company’s market cap). In addition, Goodyear is in a very capital-intensive business and generates relatively little cash compared to the amount of invested capital in the business.

From where I sit, the company is in a tough situation. It is not making much, if any, money and its liabilities are formidable: pensions at $3.7 billion plus total debt of $6.3 billion equals $10 billion.

Even if GT’s liabilities do not increase, equity investors should be intimidated by the $10 billion in existing liabilities that have a senior claim on Goodyear’s future profits. If Goodyear does generate future profits, those profits have to be large enough to cover the $10 billion in senior claims plus the expectations baked into the current stock price before equity investors can make significant money in GT.

$10 billion is more than 31 times GT’s 2011 net income. Equity investors may be at the end of a very long line when it comes to expecting a payout from GT.

For those that say all of this information is already baked into the stock price, I suggest you look again. According to my discounted cash flow model, to justify the stock valuation at $10.16/share, the company has to grow its after-tax cash flow (NOPAT) by 4% compounded annually for 10 years. I underscore that those are the expectations baked into the current stock price. For investors to believe GT deserves a higher valuation/stock price, they must believe that the company’s future profit growth will be even greater than that baked into the current stock price.

In summary, using the footnotes to lift the accounting veil on GT’s financial situation reveals some earnings and liabilities issues for a stock that is fairly expensive and could suffer downward pressure when investors concerned about these issues.

Here is a list of the ETFs and mutual funds that allocate the most to GT. Get free reports on these funds from my free mutual fund and ETF screener.

Disclosure: I receive no compensation to write about any specific stock or theme.

[1] Value is the weighted average EROPA calculated using the average of the beginning and ending balance of the Fair Value of Plan Assets.