We published an update on MAN on Oct 27, 2021. A copy of the associated Earnings Update report is here.

Rising wages are great for workers, but they’re bad for corporate profit margins. In 2017, profit margins hit a record high for the 21st century, but rising wage growth should cause those margins to regress back towards the mean.

However, not all companies see their margins compressed when wages increase. Staffing firms benefit from a strong labor market due to the increased demand from their services. This economic tailwind, combined with a cheap valuation and high-quality corporate governance, makes ManpowerGroup (MAN: $86/share) this week’s Long Idea.

The company projects that its operating margin will continue to rise in 2018. Continued margin expansion should come from revenue rising faster than SG&A along with a shift in the mix of revenue to higher value business lines.

Of the four segments, ManpowerGroup Solutions is the highest margin business, and it grew at a rate of 16% – 9% on a constant currency (“CC”) basis – in Q1 2018. That growth rate was significantly higher than the ManpowerGroup Total of 12%, or 3% CC. See Figure 2 for details. 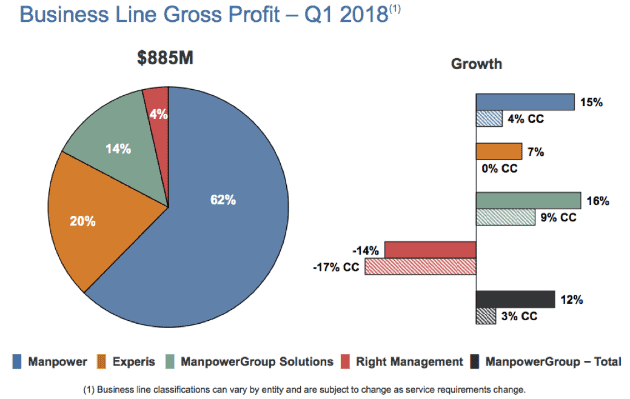 ManpowerGroup Solutions should continue to be a driver of growth and margin expansion for the company going forward, as the RPO market is projected to grow at a rate of 14% compounded annually through 2025.

Recruitment process outsourcing allows ManpowerGroup to leverage its relationships, expertise, and technology to implement recruiting processes for its clients that are more cost effective and better at identifying talent.

The millions of workers the company recruits every year gives it an enormous amount of valuable data it can analyze to identify which qualities are the best predictor of success for candidates, ways in which the recruitment process can be made more efficient, and what’s the ideal compensation package for the employer to offer.

ManpowerGroup’s scale also makes it economically efficient for the company to invest in tools such as chatbots and information-sharing platforms that reduce the amount of labor required in the recruitment process. These technologies allow the company to implement a process that is more efficient than what clients can design for themselves.

It’s hard to compare MAN to its peers on the basis of profitability due to the fact that its competitors are primarily private companies, such Allegris Group, or European firms for which we do not have detailed models, such as Adecco and Randstad.

However, we can evaluate these companies on the basis of scale, which is a key advantage in the staffing and RPO industry. Larger companies benefit from economies of scale, more relationships, and larger datasets, all of which are key differentiators.

In the staffing industry as a whole, MAN is the third-largest company, with its $22 billion in revenue placing it slightly behind Adecco and Randstad. These three companies are by far the largest in the industry, with Allegris in fourth, earning just $12 billion last year.

In the RPO industry, ManpowerGroup Services is the largest provider and is consistently ranked as a leader in the industry for the breadth of its service and its technological superiority.

Fears of Automation and “Gig Economy” Are Overblown

The threat of automation, as we’ve argued before, is overblown. Machines will learn to replicate certain jobs currently done by humans, but we will also find new jobs for humans to do. This pattern can be observed throughout human history, and we see no reason to expect it to change.

Recent events have demonstrated the limitations of automation. Elon Musk, one of the biggest proponents of the idea that machines will someday replace all human labor, recently admitted that excessive automation at Tesla’s (TSLA) factor was a mistake and that “humans are underrated.”

Meanwhile, new data that has come out in the past few months has revealed that many parts of the gig economy are more hype than substance. While analysts talk about the “Uberization” of the economy, a recent report from the Bureau of Labor Statistics (BLS) shows that the percentage of people working as independent contractors has actually declined since 2005. Figure 3 has details.

Figure 3: Percentage of People Working as Independent Contractors or On-Call Workers: 2005 vs. 2017

Before this year, the BLS had not performed this survey since 2005, which allowed the narrative of the gig economy to rise without any data to refute it. Now, the numbers clearly show this supposed shift has been overhyped. The traditional model of employment remains the dominant form of work, which means staffing and recruiting firms like ManpowerGroup will continue to play a key role.

MAN’s executive compensation plan takes necessary steps to properly align executives’ interests with those of shareholders and drive efficient use of capital. 40% of MAN’s executives’ annual incentive awards are tied to ROIC.

Numerous case studies show that getting ROIC right is an important part of making smart investments. Ernst & Young recently published a white paper that proves the material superiority of our forensic accounting research and measure of ROIC. The technology that enables this research is featured by Harvard Business School.

Per Figure 4, ROIC explains 92% of the difference in valuation for the 16 employment services companies under coverage. MAN’s stock trades at a significant discount to peers as shown by its position below the trend line in Figure 4. MAN’s enterprise value per invested capital (a cleaner version of price to book) of 1.2 implies that the market expects its ROIC to decline to below 5%.

If the stock were to trade at parity with its peer group, it would be worth $221/share – an impressive 260% upside to the current stock price. That may be an overly high projection, but it shows just how cheap the current valuation is. Below we’ll use our DCF model to quantify just how high shares could rise assuming conservative profit growth.

The market has overreacted to an earnings miss and fears of a trade war, leading the stock down over 30% so far in 2018. At its current price of $86/share, MAN looks undervalued by any metric. MAN’s P/E ratio of 10.2 is below the Industrials sector average of 23.2.

When we analyze the cash flow expectations baked into the stock price, we find that MAN holds significant upside potential. At $86/share, MAN’s price-to-economic book value (PEBV) ratio is 1.1. This ratio means the market expects PETS’ NOPAT to only grow by 10% over the remaining life of the firm. This expectation seems overly pessimistic for a firm that has grown NOPAT by 15% compounded annually over the past five years and 9% compounded annually over the past 15 years.

If MAN can maintain fiscal 2017 pre-tax margins of 4% – benefitting from a reduction in its tax rate from 37% to 28% – and grow NOPAT by just 6% compounded annually for the next decade, the stock is worth $132/share today – a 53% upside. See the math behind this dynamic DCF scenario here.

With bear concerns about the future profitability of the business, MAN shares could soar should the company report earnings that beat expectations. We know the bottom line will benefit from a lower tax rate, and the continued growth of the RPO business combined with falling unemployment should be a further boost to profitability.

Longer-term, the company will benefit if unemployment continues its downward trend. Investors have been concerned over the macroeconomic situation in Europe – where 66% of the company’s revenue comes from – but so far there’s been no break in the steady downtrend in the unemployment rate in the EU, which has dropped from 10.8% to 7.3% over the past five years.

ManpowerGroup has increased its annual dividend for the past eight years. MAN’s annual dividend has grown from $0.74/share in fiscal 2010 to $1.01/share in 2018, or 4% compounded annually. The current dividend provides a 2.3% dividend yield. Best of all, MAN generates the necessary cash flow to continue paying its dividend. Over the past five years, MAN has generated a cumulative $1.3 billion (23% of market cap) in free cash flow while paying about $500 million in dividends.

In addition to dividends, MAN has the ability to return capital to shareholders via share purchases. In 2017, MAN bought back $204 million of shares (3.6% of market cap). When combined with the 2.3% dividend yield, the total yield to shareholders could reach 5.9%.

There are currently 1 million shares sold short, which equates to 1.6% of the float and 1.4 days to cover.

Critical Details Found in Financial Filings By Our Robo-Analyst Technology

As investors focus more on fundamental research, research automation technology is needed to analyze all the critical financial details in financial filings. Below are specifics on the adjustments we make based on Robo-Analyst[2] findings in ManpowerGroup’s fiscal 2017 10-K:

Balance Sheet: we made $2.2 billion of adjustments to calculate invested capital with a net increase of $1.8 billion. The most notable adjustment was $539 million in off-balance sheet debt due to operating leases. This adjustment represented 13% of reported net assets. You can see all the adjustments made to MAN’s balance sheet here.

Valuation: we made $1.7 billion of adjustments with a net effect of decreasing shareholder value by $1.7 billion. Despites these adjustments, MAN remains undervalued.

The following fund receives our Attractive-or-better rating and allocates significantly to ManpowerGroup.

This article originally published on July 18, 2018.