Check out this week’s Danger Zone interview with Chuck Jaffe of Money Life and Marketwatch.com

As hacks or data breaches seem to occur almost daily, the cyber security sector is receiving significant attention across the globe. We are seeing investors pile into this “sector theme” which has led many cyber security stocks to soar despite the fact they do not have a solid business. When we focus on fundamentals and cut through the “sector theme” noise, we find some weak links in the cyber security industry. We are putting one of them in the Danger Zone this week: Proofpoint Inc. (PFPT: $60/share)

Revenue Growth At The Expense Of Profit

Proofpoint was founded in 2002 to combat viruses and spam that was affecting email systems. Despite increasing the usefulness of its products, Proofpoint has not been profitable to date and it doesn’t appear they will be anytime soon. Figure 1 shows that despite excellent revenue growth, Proofpoint’s operating margins are headed in the wrong direction. Likewise, the company’s after-tax profits (NOPAT) have declined from -$19 million in 2012 to -$61 million on a trailing twelve-month (TTM) basis. 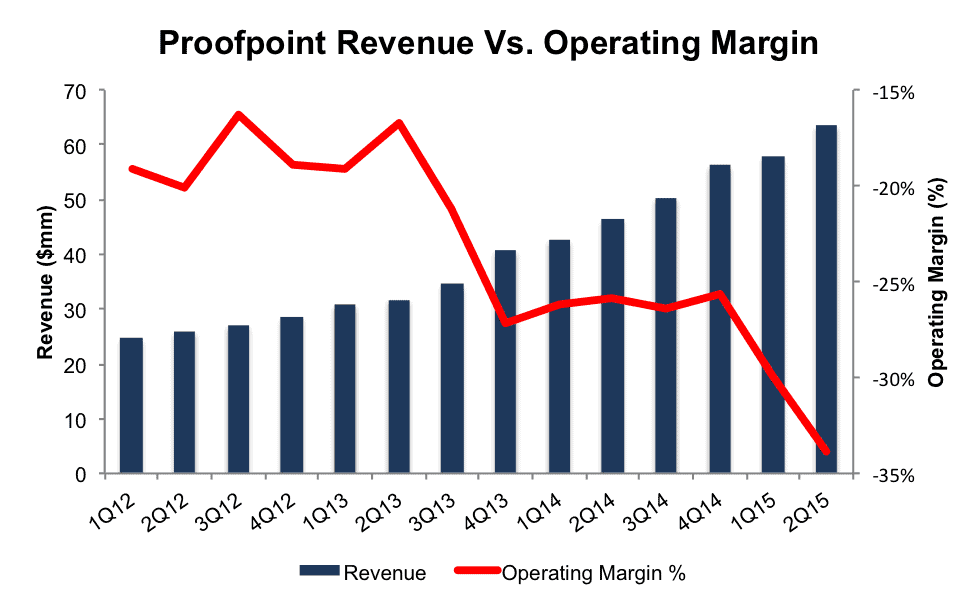 Proofpoint also earns a bottom quintile return on invested capital (ROIC) of -19%. It’s clear that Proofpoint’s attempts to grow the business (revenue wise) have not been with profit in mind.

Similar to what we saw last week in our Danger Zone report on Marketo, the email & communication security market is littered with competition, both small and large. Unfortunately for investors in Proofpoint, each of the company’s competitors are much more profitable, which gives them pricing power and operating flexibility.

Not only are these competitors more profitable, each of offers products that directly compete with Proofpoint. Microsoft recently acquired FrontBridge, Alphabet operates their own communication security, Intel owns Mcafee, Cisco acquired Ironport, Hewlett Packard operates Autonomy, and Symantec, apart from being one of the leading internet security firms provides numerous email and communication security products. Most importantly, these companies have the ability to bundle email & communication security into more robust product offerings. Proofpoint is stuck either providing a piece of the security puzzle or attempting to partner with another service provider to offer a full security solution.

Bull Case Is Rather Hollow

In what seems to be turning into a trend with software/cloud companies, much of the bull case rests on the company “reaching scale.” Once these companies reach scale, bulls argue they will be able to reduce customer acquisition expenses and finally turn a profit. While this could be possible, by cutting customer acquisition costs, Proofpoint would also become a company that is reliant upon upselling existing customers to find any future revenue or profit growth.

Additionally, we can model how Proofpoint might look if the company were able to cut sales & marketing and R&D costs in half. In this case, the company would have generated roughly $20 million in NOPAT in 2014, assuming a tax rate similar to that of the competitors in Figure 2. As a reference, the average market cap of technology companies generating $20 million NOPAT is only $642 million, well below Proofpoint’s $2.5 billion market cap.

Further weakening the future prospects of Proofpoint reaching profitability is its already robust customer mix. As of 2Q15, Proofpoint had over 3,400 customers worldwide, including over 50% of the Fortune 100. The company touts that its customers include some of the largest banks, retailers, and universities across the globe. If Proofpoint has been unable to earn a profit while serving some of the largest customer available, how can investors expect any different moving forward when the customers can only get smaller? Moving towards smaller customers/markets will result in margin contraction as the deals for Proofpoint’s services shrink but maintaining/upgrading the software remains a growing expense.

As large firms look to provide better products and services, it is inevitable that acquisitions will occur. Besides poor operating results, Proofpoint has some hidden liabilities that make the company more expensive than the standard accounting numbers suggest:

In addition to these hidden liabilities, Proofpoint has $358 million in debt on a TTM basis, which represents 14% of market cap. Any potential suitor would be greatly overpaying for Proofpoint’s poor business operations.

To determine a reasonable price for a suitor to pay for PFPT, we analyzed two scenarios.

As noted at the onset, PFPT has benefited significantly from the exuberance around cyber security stocks and its shares are up 25% year-to-date and over 350% since going public in 2012. At current prices, Proofpoint shares imply the company will not only cut its losses, but also become rather profitable. To justify its current price of $60/share, Proofpoint must raise its pre-tax margin from -28% (TTM) to 8% (similar to SYMC) and continue growing revenue by 36% compounded annually for the next 15 years. In other words, the current market price implies that within 15 years Proofpoint would be generating more than four times the revenue that Symantec generated in 2014.

On the other hand, even if we assume Proofpoint bulls are right in every sense, and the company is able to reach scale, become extremely profitable, and lead the email & communication security market, shares are still overvalued. Here is what the numbers look like if the bulls are right: if Proofpoint achieves pretax margins of 22% (average of competition in Figure 2) and grows revenue by 22% for the next decade, the stock is only worth $32/share today – a 46% downside. It is unlikely that Proofpoint can grow revenues by over 20% for a decade, but also the margin assumptions are extremely optimistic given that the competitors in Figure 2 have other, more profitable business lines boosting their margins.

Regardless of scenario, acquisition or not, the expectations baked into Proofpoint’s stock are simply not rooted in reality.

Investor Exuberance Will Wear Off and Shares Will Fall

The cyber security industry has been one of the most talked about segments over the past year or two. As such, many high revenue growth security firms have seen their share prices soar. Palo Alto Networks (PANW) is up 38% YTD and Fortinet (FTNT) is up 40% YTD. While not direct competitors, simply occupying space in the security sector has given these stocks a boost. As we near the end of the bull market, the risk increases that investors will begin to analyze the security firms more closely (e.g. look at cash flows) and sell those with valuations disconnected from cash flows. We believe PFPT is such a company. Based on its long history of losses, already robust customer base, and declining profitability it’s hard to make a case for buying PFPT. After such a large increase in share price, this could not only be a case of momentum stopping, but over exuberance in a particular sector ending as well, which would leave PFPT shares significantly lower than their current price.

Over the past 12 months 16,500 shares have been purchased and 1 million shares have been sold for a net effect of 970,000 insider shares sold. These sales represent 2% of shares outstanding. Additionally, there are 5.2 million shares sold short, or 13% of shares outstanding. It looks like insiders and some short sellers already see the writing on the wall.

Proofpoint’s executive compensation system rewards cash bonuses for meeting revenue and EBITDA targets. Equity based awards are given based on revenue, bookings, gross margin, and cash flow targets. Despite growing losses, executive pay has only increased in recent years, largely due to equity compensation. We would much rather see executive comp tied to ROIC rather than revenue and EBITDA which can grow even while the company is destroying shareholder value.

Balance Sheet: we made $232 million of balance sheet adjustments to calculated invested capital with a net decrease of $184 million. The largest adjustment was the removal of $38 million due to midyear acquisitions. This adjustment represented 14% of reported net assets.

The following fund receives our Dangerous rating and allocates significantly to Proofpoint.

Disclosure: David Trainer and Kyle Guske II receive no compensation to write about any specific stock, style, or theme.