It’s time to consider a new paradigm for interest rates – a paradigm where treasury rates remain ultra low and riskier investments are priced by a decentralized market instead of a central bank.

For years, we have been warned that interest rates will inevitably rise from their “artificially” low levels back to the “normal” levels of the early 2000’s.

In the mainstream narrative, the Fed has been artificially holding interest rates down to stimulate the economy, and soon it will have to raise rates to more normal levels. If it fails to do so, pundits warn, the economy could suffer dire consequences.

There are three problems with this narrative:

Most analysts predicting a return to higher interest rates cite the past several decades as evidence that a higher cost of capital is the norm. Figure 1 shows the long-term trend in interest rates suggests otherwise. If we treat the massive spike in the late 20th century as an aberration, today’s low interest rates look like the continuation of a 200+ year trend. 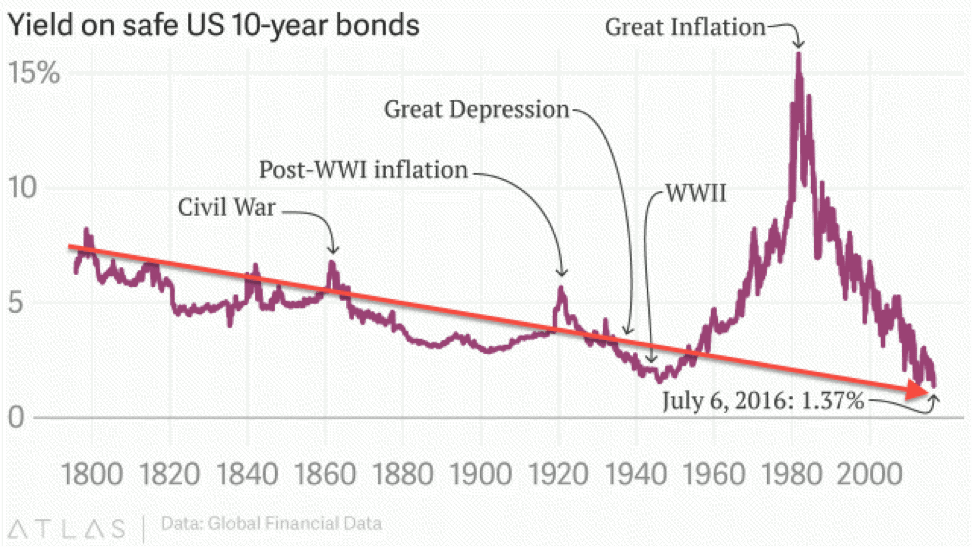 It’s not just the Fed that’s been holding rates down for the past several years. It’s been structural shifts to the economy such as low inflation expectations, an aging population (more savers, fewer workers), increasing economic stability, and a variety of other factors recently detailed in the Wall Street Journal.

Not all fixed income securities will have low rates. We are saying that the floor on rates should remain low, and that the Fed would be well advised to recognize this shift as a new paradigm.

Politics Put A Ceiling On Rates

As low as our rates are now, they are still higher than most of the developed world, e.g. Japan and Europe. There are no signs that either of those central banks plans to raise rates in the foreseeable future. As a result, higher rates in the U.S. would further strengthen the dollar, put more strain on forex markets and undermine foreign revenues to our international companies.

In addition, think of the strain put on the U.S. government’s budget from a rise in treasury rates. Debt service costs could quickly become troublesome for our government if the Fed pushed rates back anywhere close to the old “normal”.

The primary challenge facing our economy is that moderate-to-low ROIC opportunities are going unfunded despite an abundance of uninvested capital. The 2,183 Russell 3000 companies for which we have at least 5 years worth of data hold nearly $1.6 trillion in excess cash, up 43% from five years ago. Meanwhile, their invested capital is up just 25% over the same time period.

Companies have money on hand to invest in their operations, but they’re mostly choosing to hold that cash on the balance sheet or buyback stock. Many of these companies are holding back from making investments that would earn an ROIC in the low-to-mid single digits. These are investments that could generate positive economic earnings with today’s low interest rates but would look much less appealing if rates rose in the next few years.

Economists from Duke and the London School of Economics have shown that interest rate uncertainty significantly depresses the level of investment both on an individual firm level and throughout the economy. By constantly talking about raising short-term rates without setting a clear timeline, the Fed has created a great deal of uncertainty that is undermining growth.

If the Fed were to remove this uncertainty by announcing that it wouldn’t raise rates any time in the foreseeable future, companies would be more inclined to start investing in these moderate-to-low ROIC opportunities.

Homebuilding is a good example. The overall housing market may be recovering, but new housing starts remain persistently low. The 16 homebuilders we cover have a weighted average ROIC of 6%, putting them right on the bubble of economic profitability.

A signal that rates will stay low should encourage homebuilders to increase their level of investment. This would not only increase the country’s strained housing supply, it would also create jobs that might bring some of the 6 million people who want a job but aren’t actively looking for one back into the labor force.

The Threat of Higher Rates Is Hurting Employment

Workers trained for the old economy find their skills devalued, resulting in underemployment, unemployment, or an exit from the workforce.

Ideally, we want to retrain these workers to with the skills needed to find jobs in the high ROIC industries that are facing labor shortages. That level of training might not be feasible, so many of these discouraged workers are forced to the sidelines.

If the Fed tries to raise rates, business investing will fall even further, leaving more workers unemployed. Workers on the sidelines are a waste of human capital and turn into drains on society through things like unemployment benefits.

As the dissemination of capital has been decentralized, so too has its pricing. Private equity firms, credit card lenders, and business development corporations all set their own rates based on their assessment of risk/reward.

Keep in mind; the Fed has never really directly controlled interest rates. Rather, it uses open market activity to influence the Federal Funds Rate, which is the rate banks charge each other to borrow reserves overnight. This practice could affect short-term interest rates when banks had a virtual monopoly on fixed income capital dissemination, but today’s more decentralized market makes it harder for the Fed to exert such direct control.

Why We Do Not Need Centralized Interest Rate Controls

As we establish in our report “How The Internet Economy Killed Inflation”, the inflation spikes that warranted higher interests rate are probably a thing of the past. In addition, there are a number of other technological and structural shifts in our economy that support a permanently lower cost of capital.

The past few decades have also seen a significant decentralization in the allocation of capital. Once upon a time, most capital was disseminated through the banking system. When loan officers were the primary distributors of fixed income capital, society needed to put a floor on interest rates to help ensure these officers allocated capital to investments that would earn a minimum level of return. Loan officers had no incentive to take risk most of the time, nor did they have much, if any, skin in the game.

In contrast, today, we have thousands of non-bank financial institutions—from credit card companies to peer-to-peer lenders – to provide capital to businesses and individuals. Crowd-sourced funding has launched major companies like Oculus Rift, and websites like Angel List make it easier for startups all over the country to find VC investors. These agents have skin in the game and require no outside incentive to seek higher returns and optimize their risk/reward.

Markets Are Better Than The Fed At Setting Rates

No matter how smart the Fed’s Governors are, they can’t compete with the wisdom of the crowd. A large group of independent individuals tends to be more accurate than a small group of experts.

In the past, this small group of experts may have been the only ones with enough information to judge the true state of the economy. That’s no longer true. Every individual has mountains of data at their fingertips. While not everyone can be right, on average the millions of individuals making capital allocation decisions based on this wealth of information will come to an aggregate picture of the economy that is as accurate, or more accurate, than that of the Fed.

Capital Flows To High Return Opportunities More Naturally Than Ever

In the old, centralized model, bankers had more incentive to minimize risk (and keep their jobs) rather than maximize returns. It’s the classic “No one ever got fired for buying IBM” scenario. When older investors talk about their greatest mistakes, it’s inevitably the bad investments they made.

Today, the opposite is true. Ask any of the high profile venture capitalists out there about their biggest mistakes, and they’ll talk about the wildly successful startups they passed on. With more and more people becoming the agents of their own capital and seeking to maximize their gains, capital flows to high return opportunities more naturally than ever.

When we wrote “How Artificially Low Interest Rates Harm Economies in the Long Term” and argued against low interest rates because they allowed suboptimal ideas to get funded, we were thinking in the old, centralized paradigm. Since then, it has become increasingly clear that the investment opportunity schedule has shifted. The top tier of companies that can earn extraordinarily high returns on invested capital (ROIC) create a larger and larger share of the value in our economy. Figure 2 shows that companies with ROICs in the top decile have earned an ever larger share of the total after-tax profit (NOPAT) generated by Russell 3000 companies over the past five years.

As the billions of dollars of capital flowing to VC firms shows, the next Google or Apple will have no trouble getting the funding it needs. In our dynamic, modern economy, the equity model ensures that the best innovations, the ones that create significant a disproportionate amount of the jobs and value, will have the necessary amount of capital allocated to them.

We live in more of a winner-take-all business environment than ever. The winners may be knocked off and replaced at any time by a new firm, but the speed at which technology allows us to implement and disseminate new ideas makes market share gains much easier to achieve quickly.

The more people that we can empower to create new ideas and new technologies the better. We have a better chance of making that happen if the Fed removes interest rate uncertainty.

How Should The Fed Act In The New Economy

Instead of hitting the brakes on an already slow growing economy, the Fed should accept what the market is saying about interest rates. A strong signal from the Fed that it won’t raise the Federal Funds Rate for the foreseeable future would stimulate the economy, potentially bring millions of people back into the labor force, and create a more productive society.

Common wisdom says “Don’t Fight The Fed.” Today, the opposite is true. Janet Yellen and other members of the Board of Governors may want to raise rates, but the narrow yield curve shows markets continue to push rates down. As it turns out, the Fed is reluctant to fight the market.

And, most important for long-term economic growth, informing the world that low rates are here to stay would force congress and the White House to make the long overdue fiscal policy reforms that we need to get our economy going again. The Fed has been pushing with a string for a long time. The markets have made that clear. It is time for us to do the hard work that can and will drive real change, and that work is in fiscal policy not monetary policy.

2 replies to "The Fed Is Irrelevant: Low Interest Rates Are the New Normal"