We closed this position on August 6, 2018. A copy of the associated Position Update report is here.

“Growth is always a component in the calculation of value, constituting a variable whose importance can range from negligible to enormous and whose impact can be negative as well as positive. In addition, we think the very term “value investing” is redundant.  What is “investing” if it is not the act of seeking value at least sufficient to justify the amount paid?”

We agree with Warren Buffett that the distinctions between growth and value investing are irrelevant. Value without growth offers limited upside, while growth without value offers no investment merit. The best investments, as Buffett would go on to write in his letter above, offer both growth and value by employing large amounts of new capital at a high return on invested capital (ROIC).

Following these principles, we’ve identified a company with a high ROIC, double digit revenue growth, and it just so happens to be a stock that Buffett himself has been buying recently. With strong fundamentals and cheap valuation compared to its peers, Synchrony Financial (SYF: $35/share) is our Long Idea this week.

SYF is the largest provider of private label credit cards. It partners with retail giants such as Walmart (WMT), Lowe’s (LOW), and Amazon (AMZN) to provide consumers with store-branded credit cards. These private label cards tend to have higher interest rates than a normal credit card, and SYF’s net interest margin of 16.1% is much higher than Capital One (COF) at 6.8% or Discover Financial (DFS) at 10%.

The high net interest margin helps SYF earn a high ROIC. While the company’s ROIC declined in 2015, it’s moving back in a positive direction, and increased from 16% in 2015 to a top-quintile 18% over the last twelve months. As Figure 1 shows, SYF has also managed to grow after-tax profit (NOPAT) by 7% compounded annually since 2012. We were bullish on SYF when it first went public with the spin-off of General Electric’s (GE) consumer finance unit in 2014 and its strong fundamentals now earn SYF a Very Attractive risk/reward rating.

SYF is the biggest player in the private label credit card market in terms of both number of active accounts and the dollar amount of transactions. Figure 2, which comes from competitor Alliance Data Systems (ADS) investor presentation, shows SYF’s position in the industry. 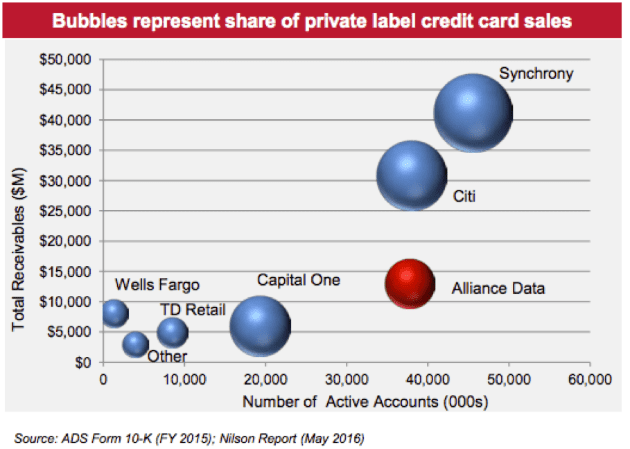 That scale provides a built-in advantage for SYF as it seeks to obtain new business and get the most value out of its existing customers. More customers and more transactions leads to more data, which SYF can then leverage to more effectively market to consumers.

Growth Opportunities on the Horizon

There’s no reason for investors to believe SYF’s NOPAT growth will come to an end anytime soon. Revenue has grown by 12% over the past twelve months while NOPAT is up 13%. There are a number of catalysts that should lead to further growth in the near future, including:

With consumer credit growing at a steady pace, SYF should continue to grow revenue and NOPAT for the foreseeable future.

While the value and growth opportunities for SYF are significant, any company in the consumer credit business does come with some built-in risks. Among these risks are:

These are real risks that investors should take into account when considering SYF as an investment. However, we believe the potential rewards outweigh the risk. Most importantly, the risks above are already factored in to the valuation and provide an attractive risk/reward trade-off.

Despite its track record of improving profitability, SYF trades at a steep discount to other companies in the consumer credit industry. Figure 3 compares SYF to several peers in terms of TTM NOPAT growth and price to economic book value (PEBV), which measures the no-growth expectations implied by the stock price.

Despite having the second highest NOPAT growth rate over the past twelve months, SYF has the lowest PEBV of its peers. Some of this disparity can be attributed to credit quality, as companies such as American Express (AXP) and Discover Financial (DFS) make loans to less risky customers, but that doesn’t tell the whole story.

36% of Capital One’s (COF) domestic credit card loans are to customers with FICO scores below 660, compared to just 27% for SYF. The market seems to perceive a higher level of risk for SYF than actually exists.

At its current price of $35/share, SYF has a PEBV of 0.5. This ratio means that the market expects the company’s NOPAT to permanently decline by 50%. While SYF does face real risks as detailed above, such a scenario seems overly pessimistic.

If SYF can maintain a 20% NOPAT margin (below TTM margin of 22%) and grow NOPAT by just 5% compounded annually for the next five years, the stock is worth ~$74/share today – a 109% upside to the current price.

For the first couple years after its spinoff, SYF did not return any capital to shareholders. However, it started paying a dividend and buying back shares towards the end of last year. The company has roughly $1 billion remaining on its current buyback plan, and it’s on pace to buyback ~$1.4 billion in shares for 2017 (5.1% of market cap). When combined with a 1.7% dividend yield, the total yield to shareholders stands at 6.8%

After a rough start to the year, where credit quality concerns dominated, SYF has been on a strong run recently. The stock is up 33% from its low in May, and there are a number of other factors that could spur this run higher.

Corporate Governance Could Improve, But Raises No Alarms

An improvement in the company’s executive compensation plan could be a long-term catalyst for SYF. Currently, SYF ties executive compensation to net earnings, efficiency ratio, and loan receivables growth. Net earnings and efficiency ratio both contain the potential for manipulation, while loan receivables only measure growth and not shareholder value.

Encouragingly, SYF insiders seem to have bought into the dip in the company’s shares earlier this year. Over the past twelve months, SYF insiders have acquired 286 thousand shares and sold 69 thousand, for a net addition of 217 thousand shares (<1% of shares outstanding). Even though these transactions represent a small portion of the overall volume in the stock, they signify the underlying confidence of corporate insiders.

Short interest has relatively little impact on the stock. There are currently 13 million shares sold short, which equates to ~2% of shares outstanding and three days to cover.

Our Robo-Analyst technology enables us to perform forensic accounting with scale and provide the research needed to fulfill fiduciary duties. In order to derive the true recurring cash flows, an accurate invested capital, and an accurate shareholder value, we made the following adjustments to Synchrony Financial’s 2016 10-K:

Balance Sheet: we made $4.6 billion of adjustments to calculate invested capital with a net increase of $4.6 billion. The most notable adjustment was $4.3 billion in reserves. This adjustment represented 31% of reported net assets. You can see all the adjustments made to SYF’s balance sheet here.

The following funds receive our Attractive-or-better rating and allocate significantly to SYF.

This article originally published on November 29, 2017.

2 replies to "This Financials Company Gives You Growth and Value"