We closed this position on May 15, 2018. A copy of the associated Position Update report is here.

BGG shares are up 2% so far this year, but we think that the stock has significant downside potential at its current price.

Why is Briggs’ Profitability Flatlining?

The first thing you’ll notice when looking at Briggs and Stratton is the fact that the company’s profits have gone nowhere for over a decade. Brigg’s after-tax operating profit (NOPAT) has fallen by 1% compounded annually over the past 16 years. This decline has occurred despite the fact that Briggs’ revenue has grown by 40% and its invested capital has grown by 271% over this timeframe.

While Briggs’ revenue is up 1% on trailing 12-month (TTM) basis, this is not surprising due to the company’s acquisition of Allmand Brothers in the second half of 2014.

As a result of this steady increase in investment and decline in profits, Briggs’ return on invested capital (ROIC) has fallen from 19% in 1998 to 5% on a TTM basis. Figure 1 plots this decline: 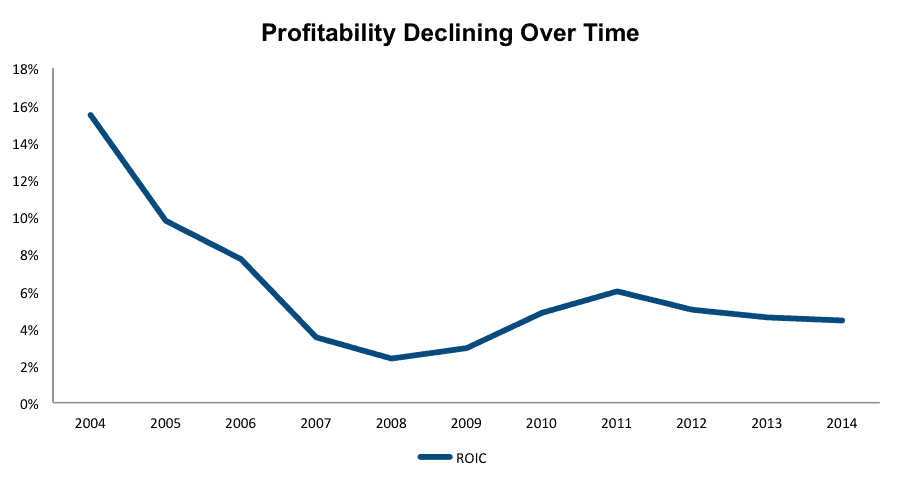 As Briggs’ ROIC has declined, it has failed to earn a return on capital above its cost of capital and earned negative economic earnings for each of the past nine years.

What’s Behind the Sluggishness?

In the six months preceding the most recent quarter, Engines sales were down over 5% over the previous period, while Product sales were up almost 13%. Engine sales make up 57% of total sales, with Products making up the remaining 43%. All told, on a TTM basis, sales were up less than 1%.

So over the short term, poor results can be blamed on struggling sales — over the long term however, sales have grown. So what’s behind the long-term decline in profits? The answer is slow and steady margin compression. Pretax margins have fallen from 12% in 2004 to 5% on a TTM basis. In an industry where the brand of an engine isn’t driving lawnmower or snow blower sales for the majority of consumers, commoditization across manufacturers has taken its toll.

Not to Mention These Disastrous Acquisitions…

In 2011 Briggs’ CEO Todd Teske stated that he would embark on an aggressive plan to dramatically improve the size of the company in three to five years by getting into higher margin businesses. Since then, the company has acquired Branco, a Brazilian power equipment manufacturer, for $57 million in 2012, and Allmand Brothers, a towable tower and heater maker, for $62 million in fiscal 2015.

Margins and ROIC, however, have declined since 2012, the year of the Branco acquisition.

Briggs has a history of missteps with acquisitions dating back all the way to 1979. In an effort to stem declining sales in 1979, Briggs wanted to expand internationally. The company acquired a Farymann Diesel GMBH with the promise of earnings growth, product diversification, and so forth. The acquired business was sold just five years later.

What has the company learned over the next 30 years?

This track record of value destruction can be shown in the company’s large amount of accumulated asset write-downs over time. Write-downs now make up around 17% of BGG’s reported net assets. In other words, BGG has written off 17 cents for every dollar on its balance sheet:

Figure 2: Write Downs as a Percent of Invested Capital 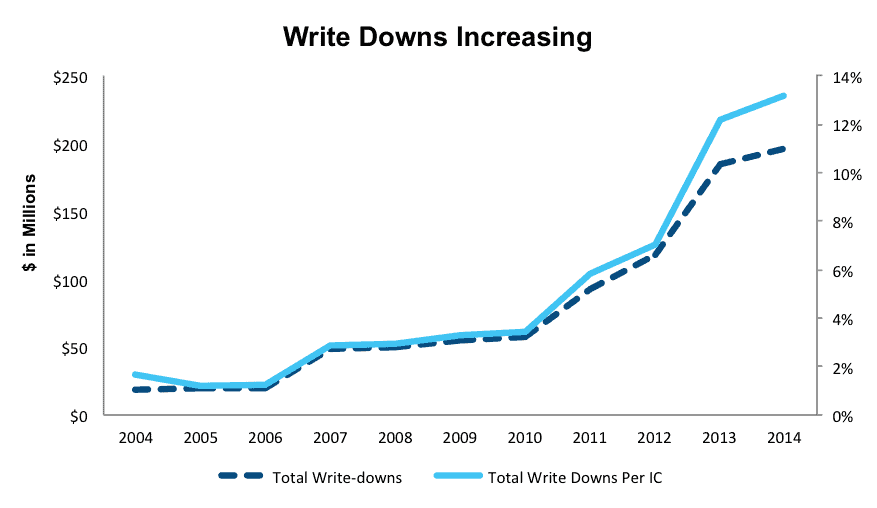 Such large write-downs indicate a consistent pattern of management failure.

These Adjustments Are Why BGG Earns Our Very Dangerous Rating

One of the reasons that many are seeing a “turnaround” in Briggs’ this year is the company’s solid growth in reported net income for 2014. However, this growth is based on the company’s artificially depressed 2013 earnings.

In 2013, the company took $19 billion in restructuring charges and $90 billion in write down expenses to lower its net income to a loss of -$34 million. This ends up providing great looking growth numbers when considering that Briggs’ $29 million in net income in 2014.

However, our NOPAT calculation shows that Briggs actually earned $74 million in profit last year after the impact of these restructuring, write down, and other unusual charges are removed. In 2014, we also added back $45 million in non-operating expenses to raise Briggs’ net income of $28 million to its NOPAT of $66 million. As a result, Briggs’ profits actually declined last year to a tune of 11%, which looks worse than the company’s sudden return to profitability.

Finally you should also be aware of Briggs’ $388 million in total debt (42% of market cap), which includes $49 million in off-balance sheet debt from operating leases (13% of debt), and the company’s $226 million in owed pension obligations (24% of BGG’s market value).

Weak Competitor in a Tough Industry

Briggs and Stratton competes with other companies making small power engines and outdoor equipment such as the venerable Deere & Co. (DE), Generac Holdings (GNRC), and Toro (TTC). Figure 3 plots Briggs against this competition in terms of ROIC and price to economic book value (PEBV).

Despite the commoditized nature of this industry, it’s really unclear why Briggs has been unable to achieve similar margins to its competitors, who also produce engines and power equipment. This looks like another sign of Briggs’ poor management.

Despite the company’s flatlining profits and ineffective management, shares of BGG are trading at a significant growth premium. To justify its current valuation of $20/share, Briggs and Stratton would need to grow NOPAT by 10% compounded annually for the next 17 years.

We think 10% annual growth for almost the next two decades is optimistic for a company that has not grown profits at all over the course of 16 years. If Briggs can grow profits by a still-optimistic 6% compounded annually for the next 18 years, the stock is worth less than $13/share, a 36% downside from current levels.

Dividend and Buyback is a Poor Use of Capital

Briggs has used $60 million of the $100 million that has been authorized for its share buyback plan. We think that this strategy might be keeping the company’s inflated share prices afloat — all while destroying shareholder value at these inflated prices. In addition, the company’s dividend has declined in recent years. Some investors may just be sticking around for these regular payouts, but we thing that both the dividend and the buyback are poor uses of capital for Briggs and its management, which has a lot of catching up to do relative to its competition as seen in Figure 3 above.

Another cut to the dividend — which has been cut in half since 2007 — is not unlikely going forward, which would send shares lower despite being a solid management decision. Cash flow is even weaker now than it was in 2007, and debt is just as high, so the dividend or the buyback could certainly be reduced in the near future.

As noted in management’s recent conference call, Briggs expects that its OEM (Original Equipment Manufacturer) customers will start their seasonal production at a later period this year, as inventories of residential lawn and garden equipment are higher than expected. This will result in lower demand in the second half of this year. These higher inventories also indicate sluggish demand in the outdoor power equipment industry overall.

Home sales were weaker than expected in March, and prices fell around the country. If these slow sales continue, less people will be buying new outdoor power equipment using Briggs engines to use at their new homes.

In the past six months, insiders have bought no shares and sold 186,598 shares, equal to 15% of insider’s total holdings. Given the facts above, you might want to follow this example.

Short interest stands at 10 million shares, or over 23% of float. Shorting remains a slightly risky proposition.

The following ETFs and mutual funds allocate significantly to BGG and earn our Dangerous or Very Dangerous ratings:

Allen Jackson contributed to this report.

Disclosure: David Trainer, André Rouillard and Allen Jackson receive no compensation to write about any specific stock, sector, or theme.

1 Response to "How Can an Industry’s Leading Company Also Be Its Worst Stock?"