We published an update on GOOGL on May 11, 2022. A copy of the associated Earnings Update report is here.

We published an update on MSFT on Nov 5, 2021. A copy of the associated Earnings Update report is here.

“Micro-Bubbles” are groups of stocks with extraordinary risk within an overall market that is reasonably valued.

This week, we’re doing the same for the stocks in “Bursting the Micro-Bubble Part 2”. We think these stocks will see a lot of capital flow to them when the second micro bubble bursts.

GoDaddy (GDDY: $81/share) built a strong brand name with its flashy Super Bowl commercials. Unfortunately, this brand did not create lasting profits or competitive advantage, as we discussed in our Danger Zone report in April 2018. Rather, its main business, domain registration, has grown commoditized due to the regulated nature of domain registrations and competition from giants such as Alphabet (GOOGL), Amazon (AMZN), web.com (WEB), and many more, all of which offer domain registration for similar or cheaper prices.

To diversify, GoDaddy expanded into hosting, site creation, and email account management. These markets are filled with entrenched incumbents, many of which are partnered with or owned by Alphabet. For site creation, Alphabet partners with third parties such as Shopify (SHOP), Squarespace, Wix.com (WIX), WordPress, and more. Furthermore, platforms such as Facebook (FB) and Etsy (ETSY) often make websites less important.

For email, Alphabet has no partners or peers as its Gmail email platform has over 1 billion monthly active users and an estimated 27% share of the email client market. By comparison, GoDaddy is far from posing a threat with 18 million customers company wide, not just in email, at the end of June 2018.

Entrenched competition and slow growth have not stopped investors from allocating to GDDY in hopes it can take even a fraction of market share. However, investors are backing the wrong horse in this race. Over the past three years, GDDY burned $1.1 billion in free cash flow while GOOGL earned over $37 billion, per Figure 1. 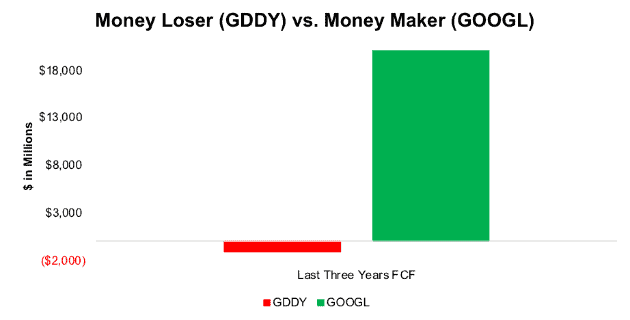 Despite having much worse cash flow than Alphabet, GoDaddy’s stock price reflects expectations for future cash flows that are much higher than the expectations in GOOGL. GoDaddy continues to generate negative economic earnings, even after operating for 20 years, yet the market expects it to grow so much that it must take a large chunk of GOOGL’s (and all other competitors’) domain, site creation, and email management businesses.

Unlike GoDaddy, Alphabet is highly profitable. Alphabet has never earned a return on invested capital (ROIC) below 25%, and it has grown economic earnings by 19% compounded annually over the past decade, as we noted in our Long Idea report in February 2018. While the market continues to wonder whether Alphabet’s dominance can continue, its importance in nearly all internet services cannot be overstated. Instead of investing in competitors fighting in its shadow, investors can own the dominant Alphabet at a reasonable valuation.

If GOOGL’s NOPAT margin expands from 20% to 23% (based on lower tax rates) and the company can grow after-tax profit by 15% compounded annually for the next 10 years, the stock is worth $1,415/share today – a 20% upside. See the math behind this dynamic DCF scenario. Those expectations are low when compared to the company’s 20% compounded annual NOPAT growth rate over the past decade.

GDDY’s bubble bursting would likely send a capital to competitors, and GOOGL represents the best in class.

Dropbox (DBX: $27/share) has built up a large base of free users with its cloud storage system, but the company has struggled to attract more profitable customers. DBX faces slowing revenue growth, accelerating expense growth, and a service that has been replicated by multiple competitors, either for free or at a similar price point. We covered each of these issues in depth in our March 2018 report.

Microsoft has solid relationships (through its Windows operating system and Office software) with the enterprise customers that Dropbox hopes to attract. Microsoft also benefits from (a) easily integrating Dropbox-like services within its deeply entrenched products and (b) generating significantly more cash than Dropbox, per Figure 3. 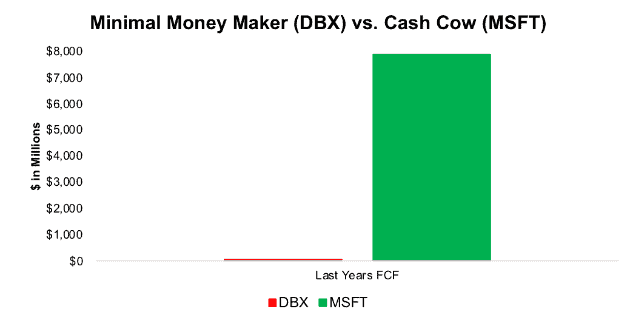 Dropbox’s valuation only compounds its lack of cash flow. To justify its current price of $27/share, DBX must immediately improve from a -5% to 9% NOPAT margin (average of competitors) and grow revenue by 22% compounded annually for the next 12 years. See the math behind this dynamic DCF scenario.

In this scenario, Dropbox would be generating $12 billion in revenue, which, at current paying user averages, implies the firm would have nearly 103 million paying users. For reference, DBX had just 11.9 million paying users as of June 30, 2018. Microsoft’s Office 365, which provides access to Microsoft’s OneDrive, had 135 million commercial subscribers and 31.4 million consumer subscribers as of June, 30, 2018. Essentially, DBX must grow its user base to near Microsoft levels, while drastically improving margins and fighting off competition from Microsoft itself, along with the others listed above.

MSFT earned $21.8 billion in TTM economic earnings – the second highest [Apple Inc. (AAPL) is first and GOOGL is third] of any technology company we cover – on the back of strong growth in cloud services and continued Office 365 dominance.

In fiscal 4Q18, Microsoft reported year-over-year revenue growth in 20 out of 22 product/service segments and double-digit growth in 16 of those segments. NOPAT margins increased from 21% in fiscal 2017 to 26% in fiscal 2018 and ROIC improved from 28% to 32% over the same time.

As we wrote in our original articles on the micro-bubble, changing trends, new technologies, and smaller tech “disruptors” get overhyped by the media and the market. The narrative that Best Buy (BBY) was doomed, that Tesla (TSLA) could supplant General Motors (GM), or that Amazon would bankrupt Walmart (WMT) never held water. The same goes for the companies on this list. Alphabet and Microsoft are highly profitable, stable companies with durable competitive advantages. Investors should stop allocating to money losers and invest in the winners in these industries.

This article originally published on September 26, 2018.

[1] Future cash flow expectations (aka “PVGO”) throughout this report equal the incremental present value of growth in future cash flows required to justify the stock prices.