We published an update on ORCL on June 29, 2022. A copy of the associated Earnings Update report is here.

We published an update on DIS and WMT on May 19, 2021. A copy of the associated Earnings Update report is here.

“Micro-Bubbles” are groups of stocks with extraordinary risk within an overall market that is reasonably valued.

Since shorting these stocks can be expensive and difficult, this report presents a list of long ideas for stocks that should rise when the micro-bubble stocks we listed in our last report fall. Just to maintain the current valuations of their stocks, those micro-bubble companies must drastically improve profit margins while also taking unrealistic amounts of market share from very powerful incumbents. We think some of these incumbents are the micro-bubble winners and expect to see a lot of capital flow back to them when this micro bubble bursts.

We have to give credit to Elon Musk. The entire saga over his offer to take Tesla private (that may or may not be real) has done a brilliant job of distracting from the ongoing issues at the electric vehicle manufacturer. Tesla finally hit its target of producing 5,000 Model 3’s in a week last quarter, although it’s still unclear whether that production rate is sustainable.

Meanwhile, GM sells ~180,00 cars a week. What’s more, it does so profitably, while Tesla continues to burn through cash at an alarming rate, as shown in Figure 1. Tesla burned over $20 billion in free cash flow over the past three years while GM earned over $14 billion. 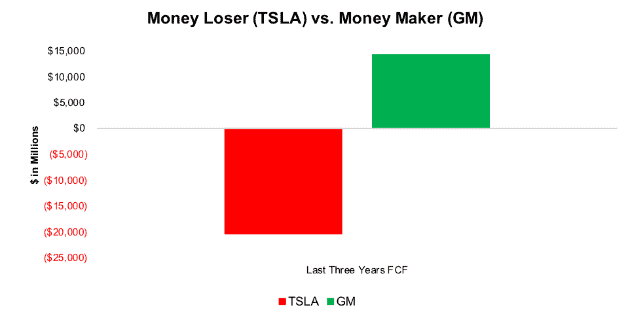 Despite having drastically worse cash flow than GM, TSLA’s stock price reflects expectations for future cash flows that are drastically higher than the expectations in GM. TSLA’s market cap of $58 billion is nearly 15% higher than GM. These two stocks are the clearest example of the micro-bubble phenomenon. Tesla remains an extremely small, unprofitable player in the auto industry, but the market expects it to grow so much that it must take a large chunk of GM’s market share. See the comparison of the market’s expectations[1] for future free cash flow growth for the two stocks in Figure 2.

GM’s economic book value – or zero-growth value – is $86 billion, but its market cap is $51 billion, so the market is projecting a $35 billion free cash flow decline in the company’s future.

While the market sees GM as an incumbent ripe for obsolescence, there’s actually a great deal of innovation taking place at the company. GM has plans to launch at least 20 electric vehicles by 2023, and Navigant Research ranked it as the industry leader in self-driving technology.

Of all the companies in the micro-bubble, Tesla looks the most likely to implode in the near future due to the increasingly erratic behavior of Elon Musk. TSLA’s bubble bursting would likely send a lot of capital to GM as investors realize that it’s not about to lose as much market share as currently implied by its valuation.

Disney’s long track record of content creation and recognizable franchises gives it a significant advantage over Netflix. The company earned $4.8 billion in TTM economic earnings – the highest of any media company we cover – on the back of recognizable intellectual properties like Marvel and Star Wars. Disney also leveraged the powerful brands of Pixar and Disney Animation to help an original movie like Coco earn over $800 million.

Netflix has no major established franchises (relative to DIS), and its quantity over quality approach to content creation means it can’t count on the strength of its brand to generate hype for new releases. As a result, it has to overspend on new content to draw viewers, which leads to hugely negative free cash flow (-$7.2 billion over the last 3 years). Figure 3 compares Netflix’s free cash flow to Disney’s. 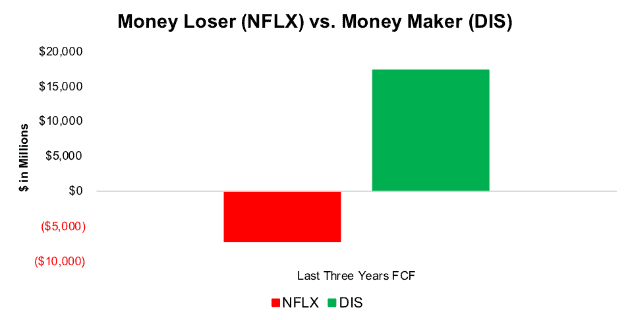 Since 2011, Netflix has issued $8.7 billion in debt to finance its aggressive content spending (projected to be $13 billion in 2018). A rise in interest rates could severely handicap the company’s ability to maintain its free-spending ways, and it won’t have any established franchises to fall back on when the pace of new content slows.

For Netflix to achieve the cash flow growth implied by its market cap, it must take huge market share from Disney while cutting content spending so margins can rise. Note that this extraordinary accomplishment is already baked into the stock price. For the stock to move higher (for fundamental reasons), the market has to believe the company will do even better.

Betting on such an optimistic scenario seems risky compared to investing in Disney, which has relatively modest growth expectations baked into its valuation and a major driver of growth going forward with the acquisition of 21st Century Fox (FOXA). In our original Long Idea on Disney, we highlighted the company’s ability to grow profitability through acquisitions such as Pixar, Marvel, and Lucasfilm. If it can pull off a similar feat with Fox, it has the potential to meaningfully exceed the expectations in its current valuation and establish itself as the dominant media company that the market currently expects Netflix to be.

Micro Bubble Winner #3: Oracle (ORCL): Transitioning to the Cloud With a War Chest of Profits

Salesforce.com (CRM) gets all the headlines these days when it comes to enterprise software, but its Oracle that generates cash flow for its shareholders, as shown in Figure 5.

Investors love CRM’s 25% annual revenue growth, but the company has only achieved this growth through a string of overpriced acquisitions. Meanwhile, Oracle’s cloud business is growing at 30% year over year.

Both ORCL and CRM have rapidly growing cloud businesses. The difference is that CRM has to dilute its shareholders to maintain this growth rate while ORCL generates enough excess cash flow to grow its business just as fast while also returning significant capital to its investors.

The press loves to speculate about potential antitrust cases against Amazon. If you only read the headlines and never looked at the numbers, you’d think Amazon (AMZN) was an unstoppable monopoly that had already completely taken over the retail industry.

In reality, Amazon accounted for just 4% of U.S. retail sales in 2017. Its $178 billion in revenue in 2017 is less than half of Walmart’s $500 billion. More importantly, its $3 billion in after-tax operating profit (NOPAT) was less than 1/5 of Walmart’s $17 billion. The difference in their operating profits explains why Walmart has generated positive free cash flow of $57 billion over the past three years while Amazon has negative free cash flow of $47 billion over the same time, as shown in Figure 7. 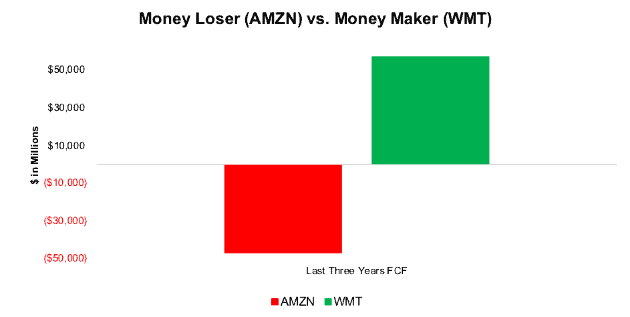 Walmart is also building out an impressive eCommerce business. It earned over $11 billion in revenue on U.S. ecommerce sales in 2017 and grew online sales 40% year over year in Q2. The growth of ecommerce hasn’t killed Walmart’s physical store sales either. Q2 comparable store sales increased 4.5% for U.S. Walmart stores and 5% for Sam’s Club.

WMT shares spiked 10% after its strong Q2 earnings report, but the market still does not fully appreciate the retailer’s resilience. Just 4% of Walmart’s valuation comes from growth expectations, while 96% of Amazon’s market cap depends on future cash flow growth, as shown in Figure 8. Amazon has often reported impressive-looking free cash flow numbers, but those reported cash flows are overstated by omitting operational expenditures such as stock compensation and capital leases. It has a long, long way to go to achieve the real cash flows baked into its stock price.

Despite the “retail apocalypse” narrative, brick and mortar stores still hold an important role in the retail landscape. Even Amazon recognizes this fact, which is why it bought Whole Foods, partnered with Best Buy and is opening its own Amazon Go stores.

No Good Bet Against Spotify

Spotify (SPOT) was the last member of our micro-bubble stocks list, and unfortunately there’s no good option for investors to bet against it. Both the record labels that it aims to disrupt and the other streaming services it competes with are small subsidiaries of much larger companies, so investors can’t get direct exposure to them.

Best Buy stands out as the clearest example of how the “retail apocalypse” narrative misled investors. Instead of going bust as most people were predicting a few years back, the company has grown NOPAT by 12% compounded annually over the past four years.

In fact, Best Buy’s renaissance has been so great that Amazon recently partnered with the brick-and-mortar retailer to sell its Fire TVs. We think Best Buy could emerge as an acquisition target as Amazon expands its brick and mortar presence.

As we wrote in our original article on the micro-bubble, changing trends and new technologies get overhyped by the media. The narrative that Best Buy was doomed never really held water, and the same goes for all the other companies on this list. Disney, Oracle, GM, and Walmart are all highly profitable, stable companies with durable competitive advantages. Investors should take advantage of the hype surrounding their competitors to buy these great companies at a discount.

This article originally published on August 16, 2018.

[1] Future cash flow expectations (aka “PVGO”) throughout this report equal the incremental present value of growth in future cash flows required to justify the stock prices. The calculation is market value minus economic book value.

[2] Future cash flow expectations (aka “PVGO”) throughout this report equal the incremental present value of growth in future cash flows required to justify the stock prices. The calculation is market value minus economic book value.