AXA Equitable Holdings (EQH), the U.S. arm of French insurance giant AXA Group, will IPO on Thursday, May 10. At a price range of $24 to $27 per share, the company plans to raise $3.5 billion, which would make it the largest US IPO since Alibaba (BABA) in 2014.

Despite its size, EQH has attracted less attention than similarly sized IPO’s such as Dropbox (DBX) and Spotify (SPOT). As a financial firm, it’s not as “sexy” as those high-flying tech stocks, and its financial statements are difficult to sort through.

This report aims to help investors sort through the complex financial filings to understand the fundamentals and valuation of this IPO.

On the other hand, 2016 earnings were overstated due to $1.9 billion in pretax gain on the sale of two properties in New York City.

With only two years of history, it’s hard to draw any firm conclusions about the long-term trend in profitability for EQH, but our adjustments show that true profits increased significantly in 2017.

EQH is Undervalued Compared to Peers

EQH’s NOPAT growth in 2017 helped its return on invested capital (ROIC) improve from 2% to 7%. This improvement is crucial because ROIC is the primary driver of valuation[2]. As Figure 2 shows, ROIC explains 55% of the difference in enterprise value per invested capital (a cleaner version of price to book) for the public companies that EQH listed as peers in its S-1. 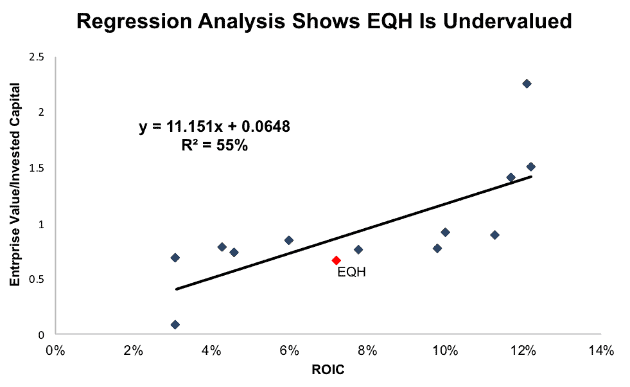 If EQH were valued at the same level as its peers, it would be worth $29/share, 14% above the midpoint of the proposed offering range.

In other words, Figure 2 shows that at the proposed offering price, the market would be expecting EQH’s ROIC to decline to 5%. The market expects the company’s profitability to regress to the mean after its growth in 2017.

EQH’s rising profitability and cheap valuation help it earn our top rating in three out of the five categories that make up our stock rating methodology. In the other two categories, however, EQH earns our Unattractive and Very Unattractive rating.

Despite its improvement in profitability, EQH’s 7% ROIC remains fairly low. It’s below the 8% average ROIC for EQH’s peer group and puts the company in the bottom 40% of all companies we cover.

Our Robo-Analyst technology enables us to perform forensic accounting with scale and provide the research needed to fulfill fiduciary duties. In order to derive the true recurring cash flows, an accurate invested capital, and an accurate shareholder value, we made the following adjustments to AXA Equitable Holdings’ 2017 S-1:

Balance Sheet: we made $1.9 billion of adjustments to calculate invested capital with a net increase of $1.1 billion. One of the largest adjustments was $1 billion due to off-balance sheet operating leases. This adjustment represented 4% of reported net assets. You can see all the adjustments made to EQH’s balance sheet here.

This article originally published on May 9, 2018.

[2] Ernst & Young’s recent white paper “Getting ROIC Right” demonstrates the link between an accurate calculation of ROIC and shareholder value.