We closed this position on November 23, 2020. A copy of the associated Position Update report is here.

Back in June, we highlighted the semiconductor equipment sector as a “pick and shovel” play to benefit from trends such as artificial intelligence, autonomous driving, and the Internet of Things. The market undervalues values these companies and prices them as if their profits are going to significantly decline. The market is missing the structural shifts that will drive profit growth via increased demand and less cyclicality going forward.

We recommended four stocks to investors in that initial report. Today we are digging deeper into one of those stocks: KLA Tencor (KLAC: $90/share), the most profitable company in the industry and this week’s Long Idea.

It’s almost impossible to make a case against KLAC based on its current profitability. We analyzed the company’s 10-K for fiscal year 2017 (which ran through June 30) on Monday, and the results were impressive. The company has a 54% return on invested capital (ROIC), which puts in the top 2% of all the companies we cover, and it grew revenue by 17% in 2017.

Investors are clearly discounting KLAC’s impressive 2017 due to the cyclical nature of the semiconductor equipment industry. Figure 1 shows that this fear has some merit but is likely exaggerated. KLAC’s after-tax profits (NOPAT) and margins have been cyclical, but have consistently trended upwards over the past 20 years.

Since 2007, a major cyclical peak, KLAC’s NOPAT has increased by 7% compounded annually while its NOPAT margin has expanded from 25% in 2007 to 37% over the last twelve months. Over the last five years, KLAC has generated a cumulative $3.7 billion (26% of market cap) in free cash flow. Going forward, analysts expect the semiconductor process control market to grow by 11% compounded annually until 2020. No matter where we are in the cycle, the long-term growth trend for KLAC looks strong.

In addition to the long-term growth trend, there have been structural shifts in the semiconductor industry over the past few years that should make cycles less volatile going forward. We covered these changes in our original report, but we’ll recap them briefly here:

This last point is especially crucial for KLAC and other process control management companies. As computers take on more complicated and crucial tasks, the tolerance for error goes to near zero. If a chip in your cellphone malfunctions, that’s an inconvenience. If a chip in your car malfunctions, it could cause a fatal accident. That means automotive semiconductors require more sophisticated and rigorous testing, increasing demand for KLAC.

As discussed above, KLAC has a dominant market share in the process control industry, and there’s nothing to suggest it will lose that position going forward. On top of its market share advantage, KLAC dominates its competitors, which include Nova Measuring Instruments (NVMI), Applied Materials (AMAT), and ASML Holdings (ASML), in terms of ROIC and NOPAT margin, per Figure 2.

Importantly, KLAC’s impressive margins don’t come at the expense of investing in its future. The company spends ~15% of revenue on research and development, which is right around the industry average.

KLAC’s superior ROIC and margins should give the company the ability to withstand pricing pressure if competitors try to cut into its market share. Meanwhile, the company’s strong free cash flow and $2.9 billion in excess cash give it the resources to invest in new production and strategic acquisitions to maintain its industry position.

Aside from the cyclical nature of the industry discussed above, it’s hard to find a strong bear case for KLAC. Most major threats to the business would require an unforeseen technological development, such as chipmakers running up against a wall in their efforts to make smaller and more complex chips, or some drastic change to the semiconductor manufacturing process.

Aside from these unforeseeable developments, KLAC acknowledges one of the biggest risks in the “Risk Factors” section of its 2017 10-K. Among the listed risks is, “The possible introduction of integrated products by our larger competitors that offer inspection and metrology functionality in addition to managing other semiconductor manufacturing processes.”

In short, if one of the companies that provides equipment used in the manufacture and assembly of semiconductors could integrate those products with some of the testing and measuring products that compete with KLAC, that bundle could draw customers away.

Lam Research (LRCX) tried to acquire KLAC last year in a combination that could have led to such integrated products, but the deal was blocked due to antitrust concerns. Given the antitrust ruling, a firm would have to invest significantly to develop the measuring products in house. At the moment, this risk remains hypothetical, but investors should continue to watch developments in this area.

Buy The Dip in KLAC

KLAC had been on a year-long tear until it peaked at ~$110/share on June 8. Since then, the stock has pulled back by ~16%, creating a buying opportunity. Investors have a chance to snap up this great company at a bargain price. In fact, the stock is cheap by almost any metric. Its price to economic book value (PEBV) of 0.8 implies that the market expects a permanent 20% decline in NOPAT. The company also looks cheap on conventional valuation metrics, as it has a P/E of just 16x.

As we wrote in our original report, KLAC is valued similarly to its peers in the semiconductor equipment sector based on its ROIC. However, the stock is significantly undervalued compared to the S&P 500, and Figure 3 shows that it trades at a discount to the tech sector as well. ROIC explains 46% of the difference in valuations for companies in the tech sector, and KLAC’s enterprise value divided by invested capital (a cleaner version of price to book) is roughly half of what it should be based on the regression analysis below. 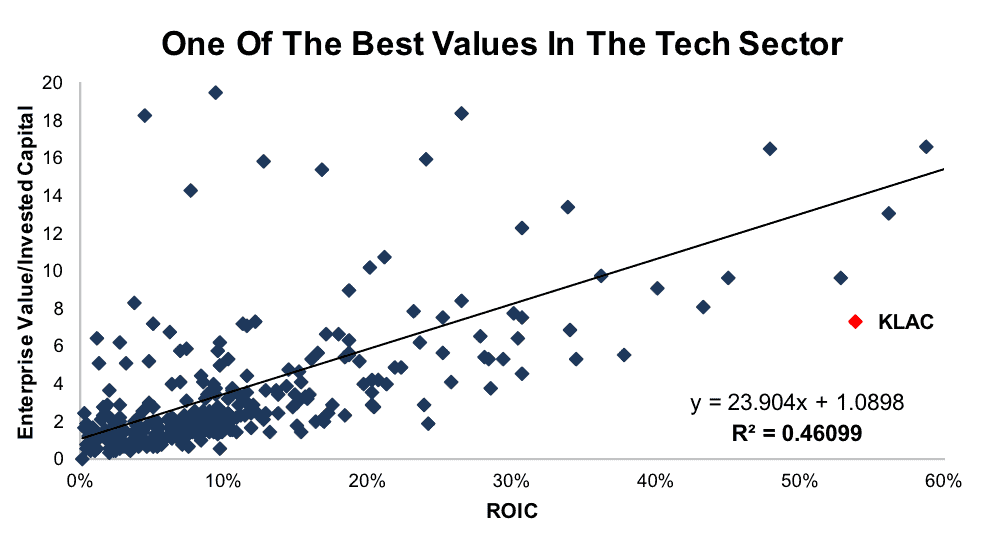 According to Figure 3, if the market valued KLAC’s cash flows on par with the rest of the tech sector, it would have an enterprise value divided by invested capital of 13.95. This valuation would equate to a stock price of $172/share, 90% above its current valuation.

Over the past 12 months, KLAC insiders have acquired 384 thousand shares and sold 252 thousand, for a net addition of 133 thousand shares (<1% of shares outstanding). Even though these share acquisitions represent a small fraction of shares outstanding, the fact that insiders are adding to their holdings signals confidence in the future of the company.

Executive Compensation Is Good, But Could Be Better

40% of executive compensation at KLAC comes from short-term cash bonuses tied to operating margin, and 25% comes from long-term share awards tied to free-cash flow margin. These are reasonable metrics, as they encourage cost control and discourage wasteful investments. We especially like the fact that KLAC’s operating margin calculation still includes stock compensation expense, so executives can’t exclude their own compensation when calculating their bonuses.

Nonetheless, the company would benefit from tying at least a part of executive compensation to ROIC, as improving ROIC is directly correlated to increasing shareholder value. Operating margin is important, but so is capital turnover. Tying long-term bonuses only to free cash flow could at times discourage the investment necessary to maintain market share and grow the business. Fortunately, the lack of focus on ROIC has not led to executives getting paid while destroying shareholder value. Since 2007, economic earnings have grown from $445 million to $907 million in 2017.

Even with its impressive profit growth, KLAC has been able to return a significant amount of capital to shareholders. The stock currently has a dividend yield of 2.6%.

Due to the uncertainty over the LRCX acquisition, KLAC only repurchased $25 million of stock in 2017, but it repurchased $182 million worth of shares in 2016 and $609 million in 2015. Under its current authorization, KLAC can repurchase up to 5.7 million shares, which at current prices would equate to $521 million.

If KLAC were to average 2016 and 2015 repurchase activity ($393 million), the firm’s existing authorization would last just over one year. A repurchase of this size is 2.7% of the current market cap. When combined, KLAC’s possible 2.7% repurchase yield and 2.6% dividend yield offer investors a total potential yield of 5.3%. These buybacks and dividends should provide some support to cushion any further decline in the stock price.

Despite the recent pullback in the stock, there looks to be plenty of positive news that could boost shares in the near future. KLAC ended 2017 with a record backlog of $1.8 billion and revised its forecast for the next six months upward by nearly 20%. This indicates strong demand for the company’s products. In particular, the company expects to double its Chinese business during calendar year 2017. News for the semiconductor industry overall has been bullish as well, with Q2 semiconductor sales up 24% year over year to $97.9 billion. Current industry tailwinds appear likely to persist through the end of 2017 and into early 2018.

Our Robo-Analyst technology enables us to perform forensic accounting with scale and provide the research needed to fulfill fiduciary duties. In order to derive the true recurring cash flows, an accurate invested capital, and an accurate shareholder value, we made the following adjustments to KLA Tencor’s 2017 10-K:

Balance Sheet: we made $5.2 billion of adjustments to calculate invested capital with a net decrease of $3.6 billion. The largest adjustment was $2.9 billion due to excess cash. This adjustment represented 86% of reported net assets. You can see all the adjustments made to KLAC’s balance sheet here.

Valuation: we made $5.7 billion of adjustments with a net effect of decreasing shareholder value by $200 million. You can see all the adjustments made to KLAC’s valuation here.

The following funds receive our Attractive-or-better rating and allocate significantly to KLAC.

This article originally published on August 10, 2017.

1 Response to "An Industry Leader In A Rapidly Growing Market"