We closed the ORBK position on November 27, 2017. A copy of the associated Position Update report is here.

We closed the KLIC position on January 14, 2020. A copy of the associated Position Update report is here.

We closed the LRCX position on August 10, 2020. A copy of the associated Position Update report is here.

We closed the KLAC position on November 23, 2020. A copy of the associated Position Update report is here.

When the California Gold Rush began in 1848, hundreds of thousands of people flocked to the west coast hoping to strike it rich. A lucky few struck it rich, most came away with nothing. The biggest winner, though, was a store owner named Samuel Brennan.

Brennan’s store was the only one between San Francisco and the gold fields, and he got rich selling shovels, picks, and pans to hopeful miners flooding into the mountains. He made $36,000 in nine weeks and would end up as the Gold Rush’s first millionaire.

The New Pick And Shovel Play

If there’s any equivalent to the gold rush today, it’s undoubtedly occurring in the tech sector, which offers opportunities for massive profits and extreme losses. As we’ve discussed before, booming sectors such as cloud computing or the Internet of Things tend to create a few big winners and lots of losers.

No matter who wins in these segments, they’re going to need a tremendous amount of processing power. We’ve recommended chipmakers Intel (INTC: $36/share) and Qualcomm (QCOM: $58/share) in the past. While both companies still have strong businesses, they’re currently in the process of large acquisitions that raise doubts about their future shareholder value creation abilities.

Today, investors should target the companies that provide the necessary equipment for semiconductor production. Companies in the semiconductor equipment segment provide the etching tools, assembly equipment, and process control instruments required to manufacture the increasingly complicated chips that power the tech boom.

Finding real profit growth in this market is hard. As we wrote last month, the recent improvement in GAAP earnings has misled investors even as economic earnings decline. As Figure 2 shows, the semiconductor equipment sector has been immune to this trend.

Given this profit growth, and the fact that industry sales grew 14% in the last quarter alone, it should come as no surprise that this group provides 4 out of the 40 members of June’s Most Attractive Stocks portfolio.

It’s true that the semiconductor equipment sector has been highly cyclical in the past, but there are reasons to believe that these cycles will be less pronounced in the future.

Figure 2: ROIC vs. Valuation For The Semiconductor Equipment Industry

Figure 2 shows that, as we have demonstrated before, return on invested capital (ROIC) is the primary driver of valuation. In fact, changes in ROIC explain over 80% of the variation in enterprise value divided by invested capital (a cleaner version of price to book).

Stocks in this sector have sold off heavily recently as investors have fled the tech sector, but we think sellers are throwing the baby out with the bath water.

One of the catalysts for the tech selloff seems to have been Citron Research’s bearish note on Nvidia (NVDA), citing valuation. We agree with Citron, as we recommended NVDA when it was trading at ~$25/share but now think it’s overvalued at ~$150/share. With an ROIC of 78% and an enterprise value/invested capital of 29, NVDA current valuation puts it way above the trend line for the tech sector per Figure I in Appendix A.

With so many investors flocking to passive ETFs, we’re going to see more and more selloffs like this one where overvalued and undervalued stocks go down at the same rate. This can be frustrating in the short-term, but it creates opportunities for long-term investors to buy high-quality stocks at discounted prices.

Investors looking to find these stocks in the semiconductor equipment industry should find those that are below the line and to the right in Figure 2, highly profitable companies that are undervalued compared to their peers.

Figure 3 shows the 21 companies in the semiconductor equipment industry that we cover. Two large cap stocks and two small caps from the industry make our Most Attractive Stocks list. Here are details on those four stocks.

Lam Research Corporation (LRCX) provides a wide array of tools that encompass many elements of the semiconductor manufacturing process: from film deposition to etching to cleaning.

LRCX has surged to record profits in the past year, but reported earnings still don’t do justice to the company’s cash flows. In its 2016 10-K, our Robo-Analyst technology found GAAP net income understated by nearly 6% due to $51 million in hidden non-operating expenses from the aborted merger with KLA-Tencor (KLAC).

The stock has been on a tear, nearly doubling in the past year, but it still has room to run. At its current valuation of ~$153/share, LRCX has a PEBV of just 1.1, which implies that the market expects the company to grow after tax profit (NOPAT) by only 10% over its remaining life.

Over the past decade (from the peak of a cycle in 2007), LRCX has grown NOPAT by 9% compounded annually. By comparison, the market’s expectations look very pessimistic. If LRCX can grow NOPAT by just 7% compounded annually over the next 15 years, the stock is worth $200/share today, 30% above its current valuation.

Even if the stock’s valuation just rose to match the trend line in Figure 2, it would be worth ~$183/share.

KLA-Tencor (KLAC), the other half of Lam’s attempted merger, is also one of June’s Most Attractive Stocks. Despite falling just above the trend line in Figure 2, it is still significantly undervalued on an ROIC basis compared to both the tech sector as a whole and the entirety of the S&P 500 (see Appendix A).

KLAC’s impressive profitability and growth are a big part of why we think the stock is attractive. Its 56% ROIC leads the sector, and the company has grown NOPAT by 7% compounded annually over the past decade.

The company has a dominant market share in the semiconductor process control market. It controls over 50% of the market, while its next closest competitor holds just 12%. The process control market has not grown at the same rate as the rest of the industry, but KLAC’s position allows it to earn superior margins.

At its current valuation of ~$101/share, the company has a PEBV ratio of just 0.9, which means the market expects a permanent 10% decline in NOPAT. If KLAC can grow NOPAT by just 5% compounded annually over the next 15 years, the stock is worth $144/share today, a 33% increase from its current price.

We wrote about small-cap Israeli company Orbotech (ORBK) when it joined May’s Most Attractive Stocks portfolio. ORBK develops tools used in the inspection, shaping, and etching of printed circuit boards.

ORBK has not been delivering as large returns as other stocks in the sector. So far in 2017, its 10% return only narrowly outpaces the S&P 500. An investigation into past tax practices and conservative earnings guidance have weighed on the stock.

Investors are paying too much attention to these short-term issues and ignoring the continued expansion of ORBK’s business. The company recently announced a new $24 million order (3% of 2016 revenue). It’s also more heavily exposed to China than its competitors. With 35% of its sales coming from the country, it is well-positioned to benefit from further Chinese investment.

At its current valuation of ~$37/share, ORBK has a PEBV ratio of just 1, implying zero future growth. With just 5.5% compounded annual NOPAT growth over the next 10 years, ORBK is worth $59/share today, 59% above the current stock price. That valuation is also almost exactly what the trend line in Figure 2 suggests ORBK should be worth.

Kulicke & Soffa (KLIC) is the smallest, and the cheapest, stock we’re recommending in this sector. KLIC primarily operates in the niche market of wire bonding, creating the electrical connections between each chip and the outside world. KLIC has dominant market share, controlling over 50% of the industry.

KLIC’s current 14% ROIC is well below its peak of 26% in 2012, which suggests this company still has plenty of room to grow. Unlike other companies in this industry that have been rapidly growing for a couple years, KLIC’s growth only started accelerating in the past twelve months. Historically, it’s growth cycles have not mirrored those for the rest of the industry.

One risk factor for KLIC is its heavy reliance on copper and gold, which leaves it exposed to changes in commodity prices. A rapid rise in the price of either material could severely hurt KLIC’s margins.

However, that risk is more than baked into KLIC’s stock price. At its current valuation of ~$21/share, KLIC has a PEBV ratio of 0.8, which implies that the market expects a permanent 20% decline in NOPAT. Based on the trend line in Figure 2, KLIC should be worth roughly double what it is today!

Other Stocks To Watch

In addition to the four stocks above, there are two other stocks in this industry that earn our Attractive rating.

Our CEO David Trainer recommended Nova Measuring Instruments (NVMI: $24/share) to investors in his CNBC appearance on April 11. The stock is up 35% since then, taking it out of our top picks, but it still has impressive growth potential and profitability.

Applied Materials (AMAT: $44/share), the second largest stock in the industry, also earns our Attractive rating. AMAT is right on the trend line, and its 21% ROIC is among the top in the industry. Like the companies mentioned above, AMAT has significant profit growth and is well positioned to benefit from increased China demand and the rise of the Internet of Things.

One Stock To Avoid

Investors should stay away from most of the companies on the far left side of Figure 2, especially those above the trend line. PDF Solutions (PDFS: $17/share) is one of the worst stocks in this sector. Unlike other companies exhibiting strong growth, PDFS has seen its ROIC and NOPAT decline every year since 2013. Despite this fact, PDFS is valued as if its ROIC will increase back to 14%, more than double its current level of profitability.

There are plenty of stocks in this sector that have great fundamentals and appealing valuations. There’s no need for investors to chase a risky turnaround story.

This article originally published on June 12, 2017.

Figure I applies the same regression analysis shown in Figure 2 to the whole information technology sector, excluding stocks with a negative ROIC.

Figure I: ROIC vs. Valuation for The Information Technology Sector 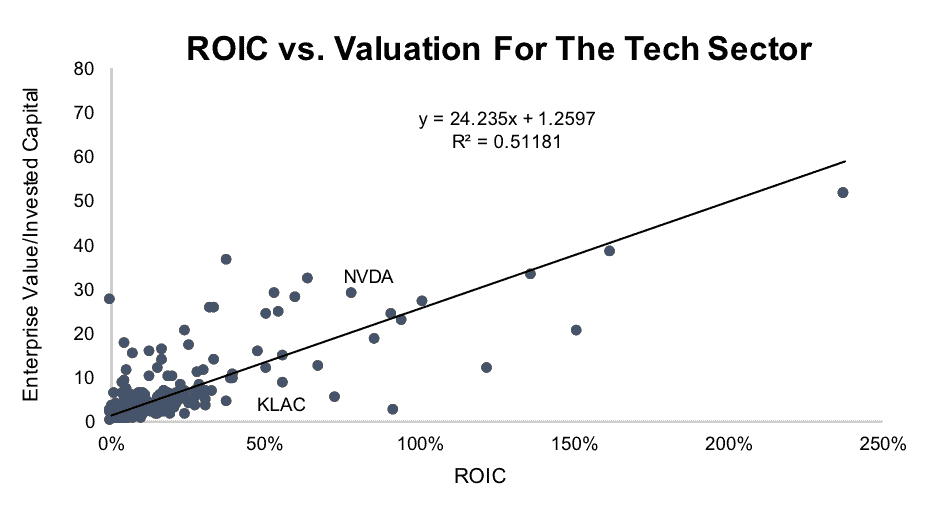 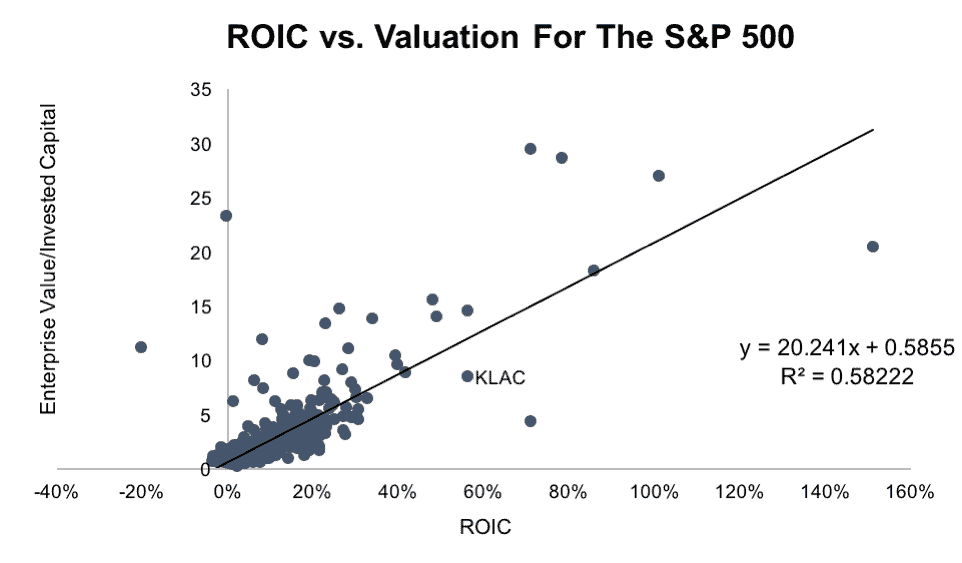 1 Response to "Selling Shovels In A Gold Rush: Buy This Sector To Profit From The Internet Of Things"