We closed this position on April 5, 2018. A copy of the associated Position Update report is here.

However, some companies have been left behind despite their strong profits. This firm has seen its stock fall 15% in the past year despite a significant increase in economic earnings. Strong profit growth and a cheap valuation earn Oclaro (OCLR: $7/share) a spot in January’s Most Attractive Stocks List and make it this week’s Long Idea.

Oclaro, which manufactures optical components for fiber optic cables and data centers, struggled to compete against larger competitors for much of the late 2000’s/early 2010’s. That all changed with the growing adoption of 100 gigabit/second transmission modules (vs. the more common 25 or 40 Gbps standard) over the past few years. Oclaro’s leadership in optical networking technology has helped it profit significantly from this technological shift.

Oclaro beat its competitors to market with its CFP2-ACO 100 Gbps pluggable transceiver. For much of 2017, Oclaro had virtually no competition for this key product, which allowed it to earn margins well above its competitors, as shown in Figure 2.[1]

Most of Oclaro’s major customers are in long-term contracts, which means the company should be able to maintain its high margins even as competitors begin to emerge. Meanwhile, it can invest its significant profits into building leadership in 400 Gbps transceivers and beyond. As Figure 3 shows, Oclaro has gone from one of the least profitable companies in its industry by return on invested capital (ROIC) to one of the most profitable.

Figure 3: From ROIC Laggard to Leader

Oclaro’s improving profitability can’t just be ascribed to industry trends. Oclaro’s ROIC continues to improve even as competitors have seen their ROIC’s decline over the past couple quarters.

Despite its profit growth in 1Q18, OCLR plunged after announcing earnings. Markets ignored the overall profitability of the company and focused on disappointing results out of China. The company’s revenue in its largest market was down 29% from the prior year, and management said they weren’t expecting a recovery in demand until the second half of calendar year 2018.

The China slowdown provides a near-term headwind, but nobody expects it to be permanent. Some analysts believe we’ve already hit the bottom, and the buildout of new 5G networks should boost demand. Even if Oclaro faces more competition from domestic Chinese suppliers in the future, it should return to growth in that market before too long.

To diversify beyond the Chinese market, the company has quietly been growing rapidly in other geographic areas, especially the Americas. Mexico has gone from 7% of revenue in 1Q17 to 19% of revenue in 1Q18, which makes it Oclaro’s third largest single country market, behind only China and the U.S.

Furthermore, Oclaro has ample growth opportunities in the Americas going forward. Google (GOOGL) plans to build three new undersea fiber-optic cables, including a 6,200 mile cable from LA to Chile. Amazon (AMZN) and Microsoft (MSFT) continue to invest heavily in upgrading their data centers to compete in the cloud. Verizon (VZ) and AT&T (T) plan to build up their 5G and fiber-optic networks, while San Francisco aims to become the first major American city to connect every home to a municipal fiber-optic network.

These growth opportunities should help Oclaro maintain its profitability through the remainder of the China stagnation. Figure 4 shows how Oclaro has offset China declines with growth in its Americas segment over the past few quarters. 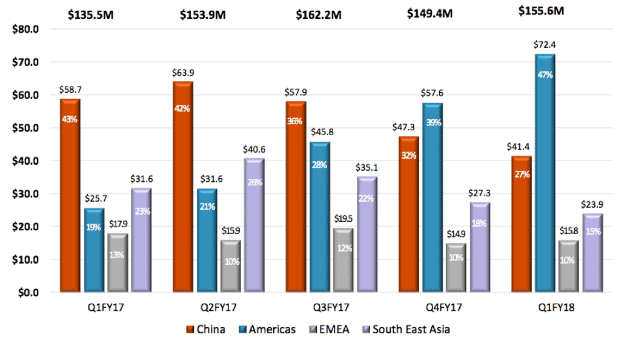 The market’s focus on China has obscured the bigger picture. When you view the company as a whole, Oclaro is still profitable and growing.

Opportunity to Buy the Dip

After a period of growth where the stock peaked at over $11/share last February, OCLR stagnated and began to fall significantly in the second half of 2017. The combination of rising economic earnings and a falling stock price make OCLR a great value.

At its current valuation of ~$7/share, OCLR has a price to economic book value (PEBV) of just 0.7, which implies that the market expects OCLR’s after-tax operating profit (NOPAT) to permanently decline by 30%.

To get more specific, our dynamic DCF model shows that even if we assume OCLR’s NOPAT declines by 50% in 2018 and takes a decade to get back to current levels, the stock has a present value of $7.60/share, a 12% premium to the current valuation. The fact that the stock has upside even in such a pessimistic scenario shows just how much of a value OCLR is right now.

In a more neutral scenario, where OCLR’s NOPAT margins compress to 17.5% (from 21% TTM) and it grows revenue by 5% annually for 10 years, the stock is worth ~$11/share today – a 65% premium to the current stock price. OCLR’s cheap valuation helps minimize the risk for investors while creating significant potential upside with modest growth expectations.

OCLR Has Plenty of Near-Term Catalysts

We believe reforming its executive compensation structure (more on this below) would maximize the long-term shareholder value of OCLR, but there are plenty of catalysts that could provide a jolt to the stock price in the near-term.

First, the company could exceed the low expectations for its upcoming earnings reports. As documented above, the growth in other geographic areas could offset China’s decline and help OCLR avoid the forecasted revenue declines.

Finally, OCLR’s cheap valuation could make it an appealing acquisition target. A number of larger names in the industry might jump at the chance to expand their 100 Gbps capability at a discount. The most rumored names are Finisar (FNSR) and Lumentum (LITE).

At OCLR’s TTM NOPAT of $130 million, both companies could afford to pay nearly double the current enterprise value of $1 billion and still earn an ROIC greater than their cost of capital (WACC). FNSR could even fund the bulk of the deal with its $1.2 billion in excess cash.

As Oclaro has not been profitable for most of its history, the company has not paid dividends or bought back stock. That could change with the company’s recent positive cash flows. OCLR earned $100 million in free cash flow in 2017 and has $250 million in excess cash. If management wanted to, they could take advantage of OCLR’s cheap stock price by enacting a significant buyback program. The company’s cash on hand would allow it to return capital while still investing in the development of new products to drive future profit growth.

Executive Compensation Could Use Improvement

Despite its recent strong ROIC performance, Oclaro’s executive compensation structure leaves much to be desired. Annual bonuses are tied to non-GAAP operating income, which among other things excludes stock-based compensation. A metric that excludes real costs of doing business and ignores the balance sheet does a poor job of aligning executives with shareholder interests.

For long-term stock awards, the company decided in August of 2016 to give executives performance based RSU’s that would be granted if the company earned $25 million in positive free cash flow over any four consecutive quarters by 2020. There were two big problems with this plan:

The flawed compensation structure and easy-to-beat targets do a poor job of incentivizing long-term shareholder value creation. Oclaro would be better served tying executive compensation to metrics such as economic earnings or ROIC that have proven links to shareholder value. Despite the misaligned incentives, Oclaro has still grown economic earnings from -$151 million in 2013 to $90 million TTM. The potential for shareholder value destruction amidst large executive payouts has not occurred, but given the current structure, risks remain.

Insiders have acquired 1.5 million shares and sold 1.3 million shares over the past twelve months, for a net addition of 200 thousand shares. The total volume of insider trading represents ~2% of shares outstanding. The fact that insiders have been net buyers of the stock over the past year indicate a long-term confidence in the prospects of the company.

There are currently 32 million shares sold short, which equates to 19% of shares outstanding and nine days to cover. This short interest has fallen from a peak of 51 million shares in April of 2017. Many short sellers appear to be taking their profits after the recent decline, which suggests the stock could be in for a reversal of fortune.

Our Robo-Analyst technology enables us to perform forensic accounting with scale and provide the research needed to fulfill fiduciary duties. In order to derive the true recurring cash flows, an accurate invested capital, and an accurate shareholder value, we made the following adjustments to Oclaro’s 2017 10-K:

Balance Sheet: we made $563 million of adjustments to calculate invested capital with a net decrease of $24 million. In addition to the excess cash mentioned above, the most notable adjustment was the removal of $41 million in other comprehensive income. This adjustment represented 8% of reported net assets. You can see all the adjustments made to OCLR’s balance sheet here.

Valuation: we made $325 million of adjustments with a net effect of increasing shareholder value by $172 million. Aside from excess cash, the largest adjustment was the $64 million of total debt, which was primarily comprised of off-balance sheet debt due to operating leases.

There are no ETFs or mutual funds that allocate more than 3% to OCLR and earn our Attractive or Very Attractive rating. Investors that want exposure to OCLR should buy it directly.

This article originally published on January 17, 2018.

[1] The peer group in Figures 2 and 3 is comprised of the 13 companies listed as peers in OCLR’s 2017 proxy statement for which we have current financial data.