For the best financial analysis ratios, look no further. Harvard Business School and MIT Sloan empirically demonstrate the superiority of the data that drives our models and calculations. This paper compares our financial analysis to Bloomberg and Capital IQ (see appendix for details).

Recently, we ran through the various flaws in the price to earnings ratio and explained why investors need to be paying more attention to return on invested capital (ROIC). This week, we’re tackling another of the market’s favorite metrics, return on equity (ROE).

Return on equity has a very simple formula:

It’s tempting to think of ROE as just an easier-to-calculate version of ROIC. All you need to do is just find the Net Income line on the Income Statement and divide it by the Shareholder’s Equity line on the Balance Sheet. Unfortunately for investors, a metric that’s so easy to calculate is rarely going to be useful in terms of explaining valuation, as Figure 1 proves.

Figure 1: ROE Has Almost No Impact On Valuation 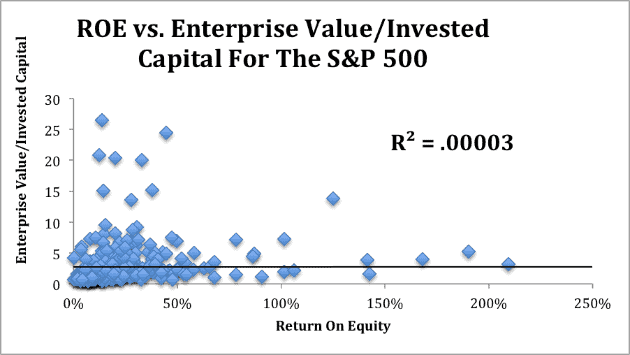 Figure 1 shows the relationship (or lack thereof), between ROE and enterprise value/invested capital, which is a cleaner version of price to book. Less than 1% of the difference in valuation between S&P 500 companies can be explained through ROE. A similarly nonexistent relationship shows up when we plot ROE against the P/E ratio. 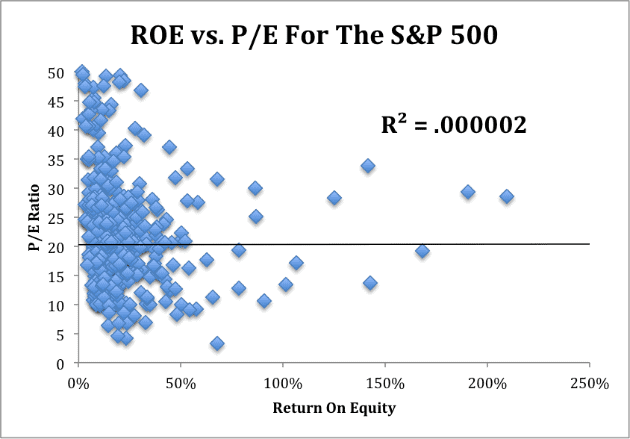 This evidence is clear. No meaningful relationship exists between ROE and P/E or enterprise value/invested capital[1]. It has an appealing simplicity, but ROE has several fatal flaws that keep it from being a useful metric.

Flaw #1: It’s Based On Accounting Earnings

I’m not going to belabor this point because it’s one we’ve made time and time again. Reported net income is not a useful metric for equity investors. GAAP rules were designed for debt investors, and GAAP net income has a number of issues that make it especially poor at measuring profitability.

ROIC fixes these issues by using net operating profit after tax (NOPAT) as the numerator. Unlike GAAP net income, NOPAT excludes financing costs, uses consistent rules across all companies and timeframes, and adjusts out the impact of unusual items and changing management assumptions.

Companies have all sorts of tools they can use in order to hide assets off the balance sheet. One of those tricks, using operating leases as off-balance sheet debt, is going to get taken away in 2018. Still, there are other hidden off-balance sheet items, such as reserves, deferred compensation, and asset write-downs.

We use invested capital for the denominator in our ROIC calculation because it factors in these hidden items so that the company is being held accountable for all of its uses of capital.

Flaw #3: ROE Can Be Influenced Through Leverage

A true measure of profitability should be focused on the operating side of the equation, without allowing financing decisions to have a big impact. By only using shareholder’s equity as the denominator, ROE becomes extremely susceptible to financing decisions, as a company can significantly boost ROE by taking on more leverage and increasing its risk.

The opposite also holds true. A company holding a great deal of excess cash will be penalized with a lower ROE, even though it may be making the responsible decision to hold that cash until a more opportune time arises to invest it at a higher return or to return that cash to shareholders more efficiently.

As an example, let’s look at Nordstrom (JWN) and Apple (AAPL). According to ROE, Nordstrom is the more profitable company, with an ROE of 47.9% compared to Apple’s 44.7%. This misleading comparison stems from the fact that Nordstrom’s total debt is equal to 41% of its market cap, whereas Apple has over $130 billion in net cash (20% of market cap).

When we remove the impact of leverage and just look at the operating profitability of these two companies, we can see that Apple has an ROIC that is more than 10 times higher than Nordstrom.

Flaw #4: Executives Have An Interest In Manipulating ROE

ROE is another one of the “advanced” or “non-GAAP” metrics that companies often use to set performance targets that executives need to hit to earn their annual and long-term bonuses. Consequently, executives will be more likely to manipulate accounting earnings, structure transactions to keep them off the balance sheet, and take on more leverage in order to boost ROE.

Because ROE is so easy to manipulate, and because executives potentially have such a strong interest in artificially boosting it, investors can’t know whether that ROE number is reliable or just a result of financial wizardry. One company might have a significantly higher ROE than a competitor simply because it’s more aggressive exploiting accounting loopholes rather than being superior in terms of profitability.

The ease with which ROE can be manipulated, as well as its various structural flaws, explain why it has almost no value in terms of explaining differences in valuation. As we see so often in the market, simplicity is not always a virtue. ROIC might not be as simple to calculate, but it’s a much better indicator of profitability and valuation.

[1] We explore the often misunderstood relationship between ROE and price-to-book in this report.