We closed this position on August 10, 2020. A copy of the associated Position Update report is here.

The real cash flows of corporate America are in decline, but certain sectors are still growing profits. We featured the semiconductor equipment sector last year in our article, “Selling Shovels in a Gold Rush: Buy This Sector to Profit From the Internet of Things.” Since then, the fundamentals have only become more attractive.

We’ve already written individual reports on two of the featured stocks from that article, KLA Tencor (KLAC) and Kulicke & Soffa (KLIC), both of which have outperformed the market since our reports were published. However, a third featured stock from that report is cheaper than KLAC, more profitable than KLIC, and has outperformed both over the past year. Lam Research (LRCX: $203/share) is this week’s Long Idea.

It’s no secret that LRCX is growing rapidly. The company’s revenue has grown by double digits every year going back to 2013. It grew 43% over the past twelve months. Investors that just look at accounting earnings, though, might not fully appreciate the extent to which LRCX is converting this revenue into profit.

Figure 1 shows that growth in economic earnings – the true cash flows of the business – has outpaced the growth in GAAP net income for each of the past three years as well as the trailing twelve month (TTM) period.

TTM GAAP earnings growth is artificially depressed by a $704 million (7% of revenue) one-time tax expense due to the impact of tax reform. Amazingly, LRCX still grew reported earnings by 32% even when including the non-operating tax expense, but when we strip out the charge, we see that economic earnings grew by 88%.

Since 2014, GAAP earnings have nearly tripled, but economic earnings have grown more than 7x. As good as LRCX’s reported numbers look, the actual economics of the business are even better.

Skeptics might attribute LRCX’s growth solely to favorable industry conditions, but comparison to its peers proves otherwise. Five years ago, the company had below average margins and invested capital turns (a measure of balance sheet efficiency) when compared to other companies in the Semiconductor Equipment and Testing industry. Now, it ranks near the top in both metrics.

LRCX’s current NOPAT margin of 26% trails only KLAC at 30% among its peers. LRCX has also gone from below average to near the top in capital turns, as shown in Figure 3.

Only Ultra Clean Holdings (UCTT) has superior capital turns at 2.57. LRCX is among the best companies in its peer group at turning capital on the balance sheet into revenue, and then turning that revenue into profit.

Since NOPAT margin and invested capital turns are the two components of return on invested capital (ROIC), it should come as no surprise that LRCX’s ROIC has improved much more rapidly than peers in recent years. Figure 4 has the details.

The semiconductor equipment industry has enjoyed favorable conditions over the past few years that have led its average ROIC to nearly double, but LRCX’s improvement has been much more rapid than its peers’.

For decades, improvements in processing power have followed Moore’s Law, which states that the number of transistors per square inch that can fit on an integrated circuit double every two years. This trend can’t last forever, and many experts believe that the current generation of chips, which have gotten as small as 5 nanometers, may be pushing up against the limits of Moore’s Law.

Even as the potential gains from denser circuitry decline, the demand for processing power is only increasing. Artificial Intelligence (AI) uses a huge amount of processing power, enough to put a strain on the computing resources of even a giant company like Alphabet (GOOGL). Chipmakers need to find new ways to keep improving processing power to meet this rising demand.

Fears of a Cyclical Crash are Overblown

In the face of this rapid growth, the bear case against LRCX rests on the idea that the industry is near the peak of a “semiconductor supercycle.” The semiconductor industry has been highly cyclical in the past, and some analysts fear that, since profits are higher than ever, the crash in demand and prices will be equally large.

We addressed this bear case in our original industry analysis. Increased demand from AI and the Internet of Things has pushed profits to these new highs, and there’s no reason to expect that demand to subside anytime soon. Major tech companies such as Alphabet, Apple (AAPL), and Amazon (AMZN) keep designing new AI chips, and chipmakers are struggling to keep pace with production demands.

Some people worry that rising chip prices will lead to overinvestment in new production capability, which will ultimately lead to oversupply and crashing prices. We think the risk here is overstated for two key reasons:

In addition, the increasing complexity of chip designs should shift more of the value toward sophisticated equipment providers such as LRCX. Even if chip production does experience a cyclical decline, this shift should cushion the impact for LRCX and lead to less profit decline than in previous cycles.

Numerous case studies show that getting ROIC right is an important part of making smart investments. Ernst & Young recently published a white paper that proves the material superiority of our forensic accounting research and measure of ROIC. The technology that enables this research was featured in Harvard Business School.

Per Figure 5, ROIC explains 70% of the difference in valuation for the 20 stocks we cover in the Semiconductor Equipment and Testing sector. Despite its rapid growth and favorable industry position, LRCX trades at a significant discount to its peers based on its position below the trend line in Figure 5. Former Long Idea KLIC is one of the only companies that is cheaper, while Long Idea KLAC is the only company that has a higher ROIC. LRCX is both cheaper and more profitable than the largest company in the industry, Applied Materials (AMAT). 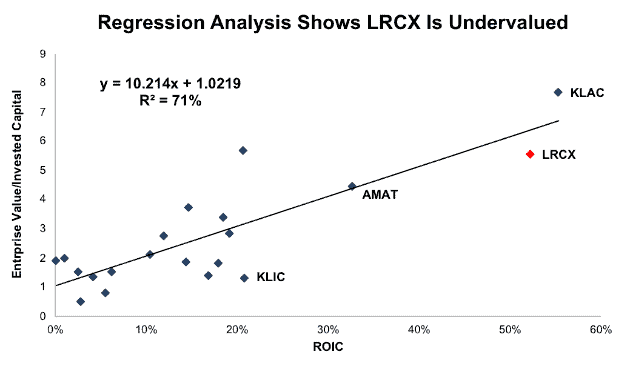 LRCX’s enterprise value per invested capital (which is a cleaner version of price to book that does a better job of capturing the capital invested in the business) implies that the market expects the company’s ROIC to decline from 52% to 44%.

If the stock were to trade at parity with its peers, it would be worth $227 per share, 12% above the current share price. With LRCX’s track record of growth and profitability, we would argue it deserves to be valued at a premium.

LRCX’s profit growth has already delivered significant returns for investors. Since we featured the stock as one of our top picks in the sector last June, it’s up 32%, compared to 21% for the NASDAQ (QQQ). Over the past five years, the stock is up over 300%.

Despite this increase in the stock price, the growth expectations implied by the valuation remain low. At its current price of ~$203/share, LRCX has a price to economic book value (PEBV) ratio of 1. This ratio implies that the market expects the company to never meaningfully grow NOPAT from the current level. At this valuation, any long-term growth should translate into upside for LRCX investors.

If LRCX can maintain its TTM NOPAT margin of 26% and grow revenue from its 2017 level by 7% compounded annually for the next decade, the stock is worth $280/share today, a 38% upside from the current stock price. See the math behind this dynamic DCF scenario here. Even this forecast may be overly pessimistic, as it only gives LRCX credit for 30% revenue growth in 2018 when the company is on track to grow revenue by 38%.

LRCX doesn’t just look cheap by our metrics. The stock has a below-average P/E of 19, which indicates that the market believes its strong growth rates will decline soon. If LRCX can continue to grow revenue and profits, its stock should continue to outperform.

Citi (C) projects the global wafer fabrication equipment (WFE) market to hit $61 billion in 2019, and LRCX projects that its serviceable addressable market will soon reach 40% of WFE spending. That leaves LRCX with a total market opportunity of $24 billion, more than double its current revenue.

We don’t expect LRCX to capture the entirety of that $24 billion addressable market, but the size of the opportunity shows that there’s still plenty of room for growth, especially compared to the expectations baked into the current stock price.

LRCX has increased its quarterly dividend in each of the last four years. Earlier this year, the company more than doubled its quarterly dividend, from $0.50/share to $1.10/share. The current dividend provides a 2.2% annual dividend yield. Best of all, LRCX generates the necessary cash flow to continue paying its dividend. It earned $2.1 billion in free cash flow over the past twelve months, while its dividend yield equates to ~$700 million in annual payments.

In addition to dividends, LRCX has returned capital to shareholders via share repurchases. LRCX repurchased $1.9 billion worth of shares over the past year and has more than $3 billion remaining on its share repurchase authorization. If the company buys back shares at the same rate going forward, it will buyback ~5.8% of the current market cap. When combined with the 2.2% dividend yield, the total yield to shareholders could reach 8%.

Annual bonuses for LRCX executives are tied to market share and “strategic, operational, and organizational development goals.” 50% of long-term incentives are awarded via performance-based shares, which are tied to relative stock price performance.

While it’s good that LRCX does not encourage executives to chase easily manipulated metrics such as Adjusted EBITDA, we would like to see them more directly align executives with long-term shareholders. Chasing market share can be destructive if it leads to excessive discounting or poor capital allocation. Tying compensation to stock price performance can lead to risky behavior and high-profile blowups, i.e. Valeant (VRX).

It would be better for shareholders if LRCX tied a significant portion of executive compensation to ROIC. There is a strong correlation between improving ROIC and increasing shareholder value[1], so tying exec comp to ROIC ensures that executives’ interests are properly aligned with shareholders’ interests.

However, despite excluding ROIC and using metrics not directly tied to increasing shareholder value, LRCX’s current plan has not led to executives getting paid while destroying shareholder value. As noted above, LRCX has outperformed its peers in terms of ROIC and grown economic earnings rapidly in recent years.

Insider Trading is Minimal While Short Interest is Moderate

There are currently 12 million shares sold short, which equates to 7% of shares outstanding and 2.5 days to cover. Short interest has stayed fairly constantly in a range from 9 million to 13 million shares over the past year.

Critical Details Found in Financial Filings By Our Robo-Analyst Technology

As investors focus more on fundamental research, research automation technology is needed to analyze all the critical financial details in financial filings. Below are specifics on the adjustments we make based on Robo-Analyst[2] findings in Lam Research’s 2017 10-K:

Balance Sheet: we made $6.5 billion of adjustments to calculate invested capital with a net decrease of $5.3 billion. The most notable adjustment was $5.9 billion in excess cash. This adjustment represented 64% of reported net assets. You can see all the adjustments made to LRCX’s balance sheet here.

Valuation: we made $8.8 billion of adjustments with a net effect of increasing shareholder value by $3 billion. Apart from the excess cash noted above, the largest adjustment was $2.8 billion in total debt, which includes $100 million in off-balance sheet debt. This adjustment represents 8% of the market cap.

The following funds receive our Attractive-or-better rating and allocate significantly to Lam Research.

This article originally published on May 23, 2018.

[1] Ernst & Young’s recent white paper “Getting ROIC Right” demonstrates the link between an accurate calculation of ROIC and shareholder value.