The Impacts of Operating Leases Moving to the Balance Sheet

The Financial Accounting Standards Board (FASB) introduced a new accounting standard (ASU 2016-02) that requires companies to recognize operating lease assets and liabilities on the balance sheet. Our forensic accounting technology has applied this convention since inception, so all of our models and research already reflect and will continue to reflect this change. In other words, we have you covered.

Note: The impact of this change is almost entirely around lessee accounting (companies that pay leases) and is the focus of this article.

Background on This Change

A company can lease assets in one of two ways: capital leases or operating leases.

Capital leases effectively act as debt to own the underlying asset leased. A simple analogy is taking out a loan to purchase a car or home; payments are made periodically and, at the end of the term, the asset is owned outright with the loan repaid.

Operating leases do not transfer ownership of the underlying asset, and payments are made for usage of the asset.  A simple analogy here is leasing a car from a dealer; the lessee makes payments for the right to use the car, but does not gain equity in the car itself and will not own the car at the end of the lease.

On the other hand, operating leases, both the assets and liabilities, were not reported on the balance sheet, despite the fact that entities were using the assets and contractually obligated to pay the lease. Also prior to this change, capital leases required separate depreciation and interest expenses, whereas operating leases required a lump-sum lease payment or rental expense. A summary of historical accounting is shown in Figure 1, below.

The single largest change in FASB’s ASU 2016-02 is the requirement of operating leases to have the associated asset and liability recorded on the balance sheet at the present value of future lease payments. These large assets and liabilities, once hidden in the notes, will now be placed directly on the balance sheet, and we applaud FASB for requiring more transparency for investors in public equities.

The new standard still requires just one lease/rental expense reported. However, because assets are now recognized, impairments will also be recognized on the income statement, outside of this single lease cost.

Historical Treatment in Our Models

Despite being off-balance sheet assets and liabilities, we have always included the effects of operating leases in its models. On the balance sheet side, we added the present value of the future minimum lease payments, discounted by a consistent cost of debt, to our measures of Invested Capital and Operating Debt. This methodology is virtually identical to the new treatment required by FASB.

Finally, along with other forms of debt, the operating lease liability is subtracted from Enterprise Value to arrive at Shareholder Value.

More details are in the white papers on our treatment of off-balance sheet debt.

Future Treatment in Our Models

After this accounting rule change goes into effect, we will continue to calculate operating lease liabilities and expenses as we always have. Given the likely variances in how companies will calculate their operating lease debt, we will remove what they report the on-balance sheet and replace it with our calculated value. Our values will provide far greater comparability for all companies with operating leases as well as for the year-over-year results of individual companies. 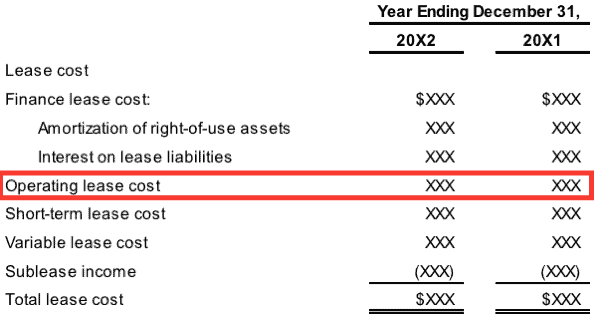 Impact on Our Models

There will be no material change to our models as a result of this accounting update since we have always included the effects of these off-balance sheet liabilities when calculating ROIC, invested capital, NOPAT and Shareholder Value. There will, however, be a change in the reported total assets and liabilities of public companies.

Although the change is not slated to be required until the 2019 calendar-year, a few companies have early-adopted, e.g. Microsoft (MSFT). Figure 4, below, was taken from Microsoft’s first quarter filing of its current fiscal year. 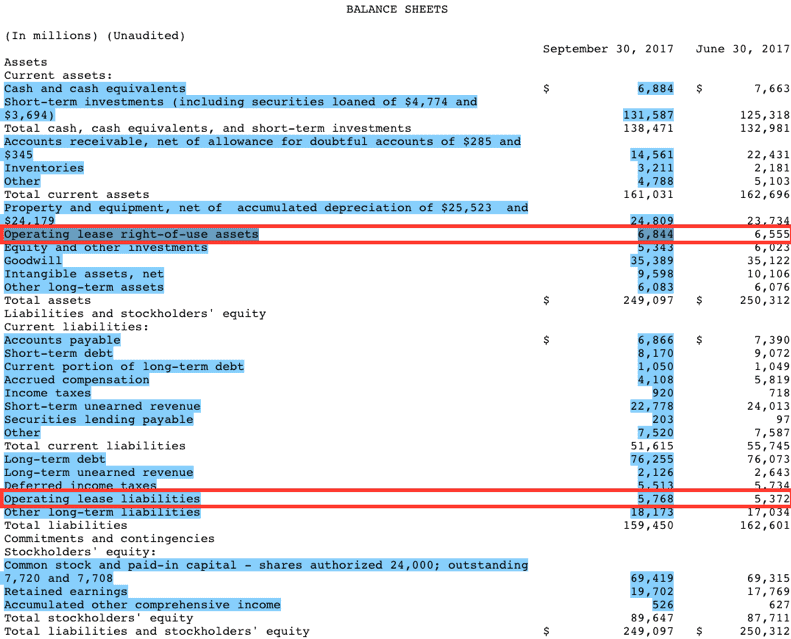 Microsoft reports operating lease assets of $6,844 million in Q1 under FASB’s new disclosure requirements. Per Figure 5, below, this compares to the $6,417 million we calculate and include in invested capital for Microsoft’s fiscal 2017 (there is no disclosure in the Q1 filing for year-end value of operating lease assets). Note also in Figure 5, the non-operating implied interest expense of $325 million that will be excluded in the calculation of Microsoft’s 2017 NOPAT. 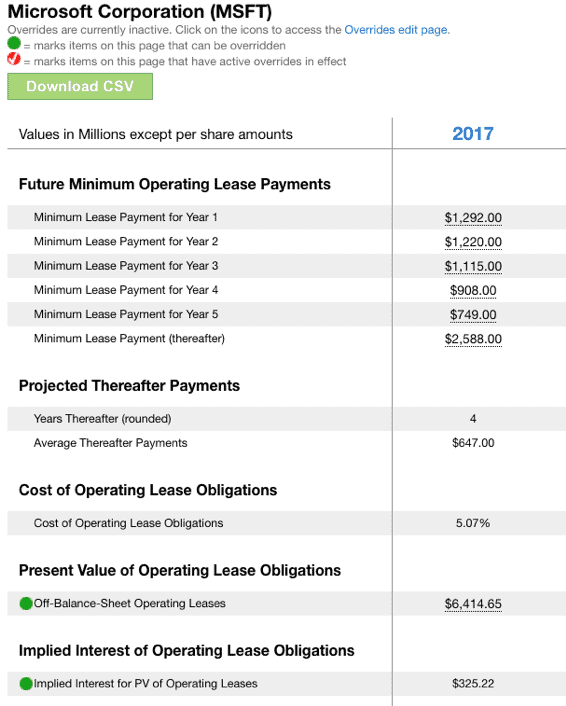 However, for those where the operating lease liability/asset is relatively large, we do not expect early adoption, and we do expect significant disruption to analysts’ models that have not already accounted for operating leases prior to the requirement of adoption of the new rule.

Figure 6 highlights companies that have large operating lease liabilities relative to their reported assets. In other words, these companies are likely to hold off on adopting the new standard to preserve any benefits gained from not disclosing the liability.

Town Sports International Holdings Inc. (CLUB $8.15/share), for instance, will see their reported assets increase by ~224% or more than triple.

Figure 6: Largest Changes in Reported Assets from This Rule Change

In addition to the companies listed in Figure 6, we highlight a few larger cap companies where the new lease liability/asset will be impactful:

Figure 7: Largest Changes in Reported Assets for Companies Greater than $100B in Market Cap

Figures 7 and 8 show that many major companies will experience significant changes to their balance sheets because of this accounting rule change.

Figure 8: Largest Changes in Reported Assets for Companies Greater than $50B in Market Cap

Any investor using traditional metrics such as ‘Return on Assets’ will see sudden, large changes that misleadingly suggest changes in the underlying business when there are only changes in the accounting for that business.

We strive to be at the forefront of accounting standards changes. We prepare for months in advance of changes to ensure our models remain the best in the business.

When meaningful rule changes are announced, we update our calculations and models to maintain as much historical comparability as possible while also accurately reflecting the true economics of the business.

Regardless of whether companies adopt rules early, late or on time, our models will be consistent year-over-year.

“For finance leases, a lessee is required to do the following:

For operating leases, a lessee is required to do the following:

Get Investment Research That Reads the Fine Print